10 Tech Stocks That Are Still Worth Your Time (And Money)

The technology sector may have led the charge this year, up more than 40% since the late-2018 low. But, as we head into the dog days of summer and what’s usually a slow patch for the third year of a presidential term, those very same tech stocks are looking uncomfortably vulnerable to a wave of profit-taking.

Not every technology name is too risky to step into at this time, however. There are a handful of them with more upside ahead than behind. Granted, it takes some scouring to find them, but they’re out there.

To that end, here’s a rundown of the top tech stocks to buy in an environment that’s not decidedly bullish. A handful of them may be a little off the radar, but that’s the point. The broad sector tide tends to push the most familiar names around with it. Standouts tend to march to the beat of their own drum, and are equipped to perform here in the second half of 2019. 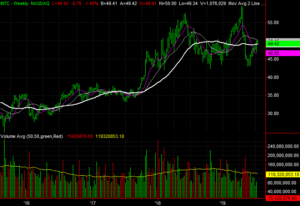 There’s no getting around the fact that Advanced Micro Devices (NASDAQ:AMD) caught rival CPU maker Intel (NASDAQ:INTC) off guard back in 2016.

Largely left for dead, mired in its own irrelevancy, AMD’s CEO Lisa Su hit the ground running with a plan, when she took the helm back in 2014. A couple years later, AMD’s new Ryzen series of processors and impressive leaps with graphics processors and 7 nanometer technology put Intel on its heels.

AMD played a big role in creating the headwind that has held INTC stock since, and a string of uncovered security flaws in some of its older processors did the rest of the work.

No company becomes more innovative and effective than a company fighting to hold onto its leading position in its respective markets though, and Intel is (finally) doing that. Although its 7 nanometer CPUs have been put off until 2021, stop-gap technologies like its Ice Lake architecture are powerful enough compared to similarly priced options, while Intel gets back in the game.

The recent weakness in INTC stock is a chance to step into an underestimated company on the cheap. The trailing and forward-looking price-to-earnings ratios are both just over 11. 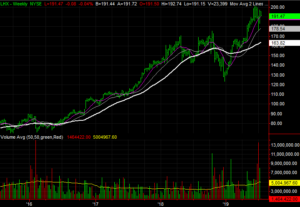 In some circles it’s still just being called L3, though as of April, a so-called merger of equals gave birth to what’s now properly called L3Harris Technologies (NYSE:LHX) … an organization that spans the defense contractor and technology space.

It has not been a poor performer. In fact, it’s up more than 40% year-to-date, and seemingly still going strong.

There’s confusion within the actual act of the merger though, which was only completed at the beginning of this month when the new ticker “LHX” went into service. Still not knowing where to look, and in many cases still lacking any analyst outlooks, many investors don’t know or can’t fully appreciate that a 10% dividend hike has already been put in place, and a twelve-month stock-buyback program of $2.5 billion has already been established. 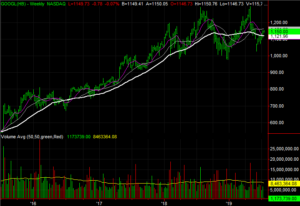 Alphabet (NASDAQ:GOOG, NASDAQ:GOOGL), parent of search engine giant Google, may have gotten this year started on the right foot. That early advance was clearly up-ended in early May though, when an earnings miss sent the stock careening from a high near $1,280 to a low near $1,000 in early June.

Investors largely lost perspective though. Sales were still up year-over-year last quarter. Operating cash flow was up year-over-year too. While per-share profits fell even when stripping out the impact of a steep fine, however, this is still Alphabet, which still owns Google. It’s proven to be one of the best stocks to buy specifically because the company finds a way to constantly renew its reach into consumers’ digital lives. It’s proven a particularly good buy on dips like the one seen just a few weeks ago. 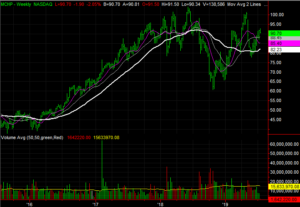 When investors think of tech stocks to buy, Microchip Technology (NASDAQ:MCHP) isn’t a name that tends to come up first, if at all. The company isn’t exactly on the front lines, so to speak, putting its logo on the hardware technology owners hold in their hands or have on their desks.

In turbulent times though, perhaps being a little bit off the radar is a good thing.

To that end, Microchip Technology has solid exposure to the pieces of the technology market that are solidly resistant to cyclical headwinds. It makes microcontrollers, analog and digital converters and LED-backlighting solutions, just to name a few. Its wares are found in everything from automobiles to smart meters to home appliances, and more.

This diverse product base is a key part of the reason that, though it ebbs and flows in the meantime, the bottom line reliably grows for the long haul. 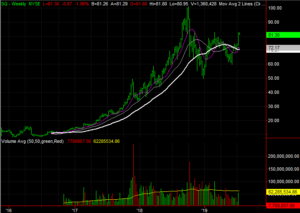 While rival Paypal Holdings (NASDAQ:PYPL) continues to be the dominant player in the alternative payments space — particularly now that it owns Venmo — Square (NYSE:SQ) somehow seems to be making inroads with younger consumers that are starting to enter their highest earnings years.

More important, it’s drawing a larger crowd on the newest frontier of the payment space. As of June, Instinet says, there are more active users of Square’s peer-to-peer money transfer app than there are users of PayPal’s option.

If that’s a microcosm of how Square’s payment processing platform resonates with consumers (and it at least partially is), then the younger company is well positioned to take more than its fair share of the ever-changing money middleman market.

Perhaps more important, this year’s and next year’s strong revenue growth is expected to drive a major push into profitably. Last year’s bottom line of 47 cents per share is projected to reach 76 cents this year and $1.12 next year. 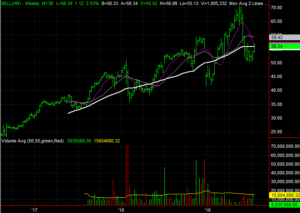 Although taken private in 2013, computer maker Dell Technologies (NYSE:DELL) became a publicly traded entity again in 2018 following a complex spin out and repurchase from VMware (NYSE:VMW).

It has been a well-received return thus far. Although volatile, the long-standing advance since 2016 when it was still a tracking stock of VMWare is still in place, with this year’s selloff starting to be unwound again.

Investors are still struggling to find analyst outlooks for the new/reborn company, while those who’ve found some have to like what they see. Next year’s projected earnings of $7.29 per share on respectable revenue growth translates into a forward-looking P/E of less than 8. 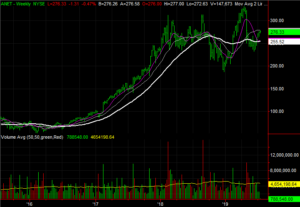 Arista Networks (NYSE:ANET) was not only bold enough to take on a venerable Cisco Systems (NASDAQ:CSCO) within the networking market, it was savvy enough to capture a respectable piece of the market. Capitalizing on Cisco’s complacency, Arista leveraged its software-driven, cloud-based solutions into more than $2 billion worth of revenue over the course of the past four quarters.

That’s still relatively small in the grand scheme of things, and ANET is still a relatively expensive stock. It’s one of the best stocks to buy among tech stocks, however, as it’s en route to a big coming-of-age next year.

With top-line growth expected to reach just under 20% this year and next, last year’s per-share profits of $7.96 are projected to reach $10.56 next year. That translates into a forward-looking price-to-earnings ratio of right around 26 … a very reasonable price to pay for a small cap facing the kind of opportunity Arista has in front of it. 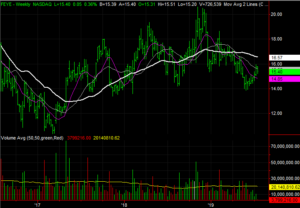 It’s not the biggest cybersecurity outfit, and it may not be the best. FireEye (NASDAQ:FEYE) stock, however, may be the name in the business offering the most upside to newcomers if Stoic Point Capital Management analyst Raj Shah’s intuition is on target.

Shah wrote last month “We estimate FireEye trades at a nearly double-digit 2021 FCF yield and is worth $23-$30 per share, driven by continued execution and leverage.” Shah went on to explain “Cybersecurity spending is expected to grow at an 8% CAGR over the next few years, well ahead of overall IT spending growth. It is a unique pocket of enterprise spending as companies are reticent to be thrifty amid state-sponsored cyberattacks, data leaks, and privacy concerns.”

Investors lost faith in the story late last year, but are starting to wade back into the trade. 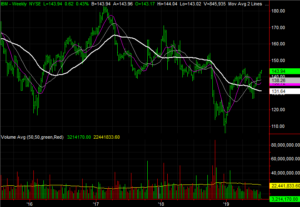 The turnaround International Business Machines (NYSE:IBM) CEO Ginni Rometty is leading has been interesting to watch, even if ineffective thus far. Despite solid revenue growth from the company’s so-called “strategic imperatives” like mobile and security, it has not been enough to offset headwinds on other fronts. Last quarter’s total top line was down nearly 5%.

The tech giant may have reached a turning point though. While this year’s top line is expected to shrink by another 3%, next year’s estimated revenue suggests revenue will be flat.

What happens beyond that is still too uncertain to say with any great confidence, but the deal announced on Tuesday morning to provide software-defined networking solutions for AT&T (NYSE:T) in addition to the recently completed acquisition of Red Hat suggest IBM may truly be on the cusp of rekindled growth. 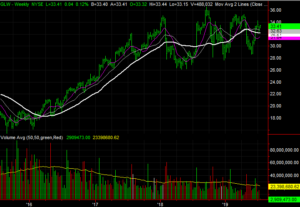 Corning (NYSE:GLW) may not be the growth machine it once was, but don’t count it out. What it lacks in raw horsepower it more than makes up for in value and reliability. The 5G evolution that’s now underway? The bulk of the data loads that the new high-speed wireless technology will facilitate won’t actually be handled wirelessly, but rather, through fiber optic cables like the ones Corning makes.

That’s not necessarily the reason Corning is quietly one of the best stocks to buy, however. Rather, Corning is a standout among tech stocks largely because the company’s leadership is so deliberate and self-directed. Just after completing a four-year, goal-oriented plan it called its “Strategy and Capital Allocation Framework” earlier this year, it unveiled another one called “Strategy and Growth Framework.”

This 2020-2023 plan is specifically going to dive into new kinds of glass pharmaceutical packaging at the same time it continues to capitalize on the growing mobile touch-screen market.

As of this writing, James Brumley held long positions in Alphabet and FireEye. You can learn more about James at his site, jamesbrumley.com, or follow him on Twitter, at @jbrumley.