News of the culling of thousands of jobs at Deutsche Bank is rattling Wall Street on Monday, with technology stocks getting hit. Also weighing on sentiment is a downgrade of Apple (NASDAQ:AAPL) by analysts at Rosenblatt. The downgrade comes ahead of the company’s unveiling of its new iPhone handsets later this year. And it also comes despite the addition of the stock to Needham’s conviction buy list. The downgrade is apparently carrying more influence on the minds of traders.

With all eyes on Federal Reserve Chairman Jerome Powell’s semi-annual testimony to Congress on Wednesday, stocks look set for further weakness here as an acceleration of job gains reported on Friday makes the rate cuts that the future market is expecting less and less likely.

The potential for disappointment is high at a time when a number of important large-cap stocks are already rolling over. Here are four Dow Jones stocks to sell now: 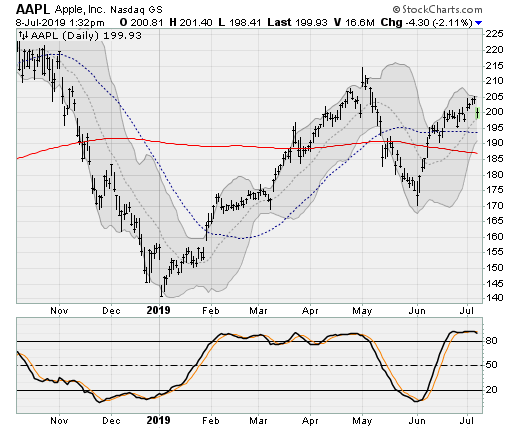 Apple shares are testing below the $200-a-share level and risks a violation of the 50-day moving average as investors respond to the downgrade from analysts at Rosenblatt, who assigned a $150 price target on a “fundamental deterioration” over the next 6-12 months.

To be fair, this price target is the lowest among the 39 Wall Street analysts covering the stock. But following the departure of Apple’s longtime design guru, doubts are growing.

The company will next report results on July 30 after the close. Analysts are looking for earnings of $2.10 per share on revenues of $53.4 billion. When the company last reported on April 30, earnings of $2.46 per share beat estimates by 10 cents on a 5.1% decline in revenues. 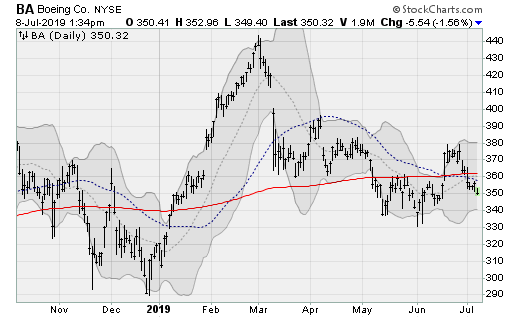 Boeing’s (NYSE:BA) woes continue to grow, with the 737 MAX fleet still grounded and a Federal probe into its safety practices widening to the 787 Dreamliner as well. Today, a Saudi airline cancelled nearly a $6 billion order for 737 MAXs in favor of Airbus. The longer the grounding continues, the more damage is done to the company’s hard-won reputation with passengers.

The company will next report results on July 24 before the bell. Analysts are looking for earnings of $1.81 per share on revenues of $19.9 billion. When the company last reported on April 24, earnings of $3.16 per share missed estimates by three cents on a 2% decline in revenues. 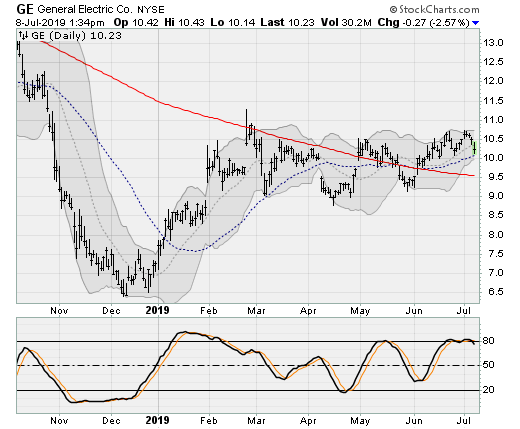 Shares of General Electric (NYSE:GE) are rolling down off of overhead resistance going back to late February, setting up a violation of both its 50-day and 200-day moving averages. Watch for a return to the April low near $9, which would be worth a loss of more than 12% from here. 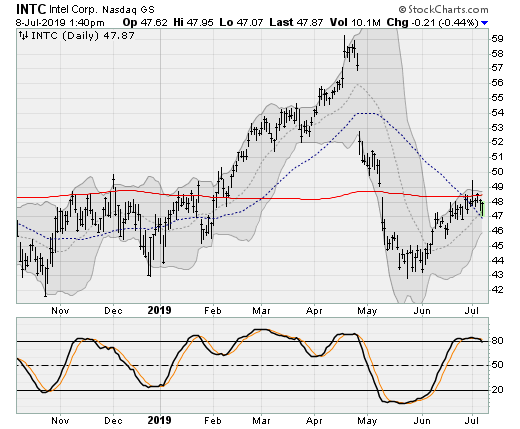 Intel (NASDAQ:INTC) shares are struggling to rise up and over their 200-day moving average, risking a reversal back down to its late-May lows. Shareholders are still shell-shocked by the near-30% decline suffered from the high set in April as semiconductor sales slowed and manufacturing activity globally hit a wall. There are also worries that the U.S.-China trade fight will be centered on the semiconductor industry. The U.S. government, for instance, pushed to cut Huawei off from American suppliers.