In his second day of testimony, Fed Chair Jay Powell essentially confirmed that a rate cut is coming this month. For the market’s part, the Fed Funds futures are pricing in at least a 25 basis point cut this month. To be fair, the market was already pricing in such a cut before Powell’s comments, but even so, the market was again unable to hold onto a bulk of its opening gains. Let’s look at a few top stock trades for Friday. 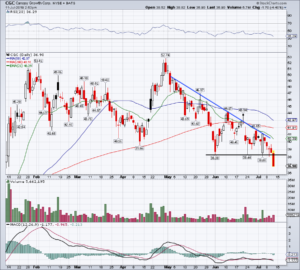 Shares of Canopy Growth (NYSE:CGC) are taking a tumble on Thursday, down almost 5% so far on the day. However, the breakdown could be more than just a shakeout.

CGC stock is cracking through a floor of support, showing that the descending triangle — a bearish setup — is in full force. If Canopy Growth can reclaim the $38-ish area and rally over $40, CGC could repair some of the technical damage.

Below $38 and the setup remains bearish. 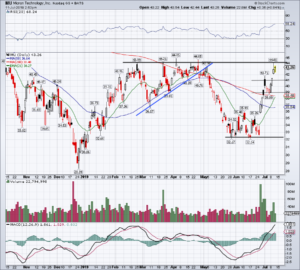 A few months ago we highlighted a potential breakout in Micron (NASDAQ:MU) with an ascending triangle — the opposite setup of CGC. However, when uptrend support (blue line) gave way, the setup failed.

Now, MU stock is back up into prior resistance near $44. Given the big run we’ve seen, I am going to assume $44 is resistance unless Micron stock can push through. On a retreat, let’s see if $41 holds as support. If not, a retest of $39 could be on the table. 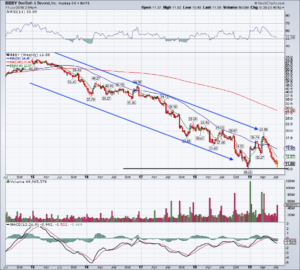 Man, Bed Bath & Beyond (NYSE:BBBY) has been a total disaster over the past few years. Shares have cratered 80% over the last five years, with Thursday’s 3% fall not doing much to help.

On the plus side though, BBBY stock has rallied strong off the lows at $10.43.

At this point, we need to see the lows from December hold, at $10.21. Below and more selling can take place. On a rally, let’s see if BBBY can reclaim the $12.50 level and the 10-week moving average. 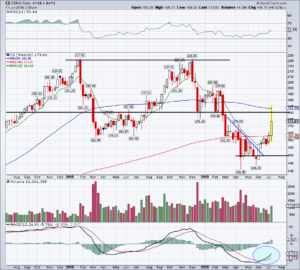 Shares of Cigna (NYSE:CI) are ripping higher by more than 8% on Thursday. That’s great news for bulls, although a stronger close would have been nice.

Further, the key $180 level couldn’t be reclaimed either.