It was a tough day for investors on Thursday, with U.S. equities falling on uncertainty around earnings. We’ve got a big day coming up, with Starbucks (NASDAQ:SBUX), Amazon (NASDAQ:AMZN), Alphabet (NASDAQ:GOOG, NASDAQ:GOOGL) and Intel (NASDAQ:INTC) all reporting after the close. Collectively, they represent almost 7% of the SPDR S&P 500 ETF (NYSEARCA:SPY) and more than 22% of the PowerShares QQQ ETF (NASDAQ:QQQ). Let’s look at some top stock trades for Friday. 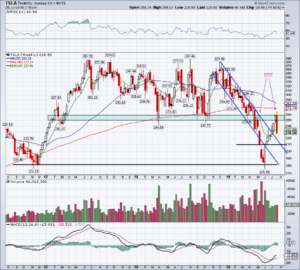 This is exactly what we were afraid of with Tesla (NASDAQ:TSLA): Long-time range support turning into resistance. We’ve been quite vocal here on InvestorPlace about this $250 to $260 area on the charts and now the setup is playing out.

Shares are down almost 14% on the day after the company disappointed Wall Street with its second-quarter results.

The $250 to $260 level had been vital range support for years — shown on the chart with a blue rectangle — but gave way in April as Tesla stock started to show its cracks. A week later, shares rebounded into this vital zone, but were then rejected from this area.

That was the big concern with this level, that support would turn into resistance. Last week, shares finally rallied back to this point. Ahead of earnings the stock was even breaking out over $260, while Tesla stock was up almost 50% from the lows two months ago, an incredible feat.

But with Thursday’s decline, the $250 to $260 level should now be viewed as range resistance until proven otherwise.

From here, it would be encouraging to see Tesla stock reclaim the 10-week moving average. If it can, perhaps it can retest this new level of resistance.

If it can’t reclaim the 10-week, it would be encouraging to see the 50-day hold as support near $221. Bulls would also like to see prior channel resistance (blue line) hold as support and they will not want to see TSLA below $210. If it is, it could retest the lows near $180. 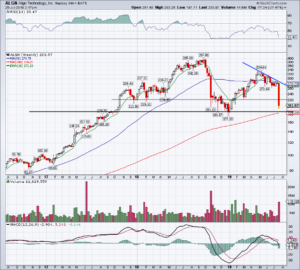 It’s a brutal day for Align Technology (NASDAQ:ALGN), with shares down over 27%. Disappointing earnings has sent this stock reeling, as it’s now about 50% off its highs.

Taking a look at the weekly chart, there may be some reprieve around the corner. The 200-week moving average is down at $184, while $185 has proven significant in the past.

While a 9% drop is rarely talked about as a good thing, that may very well be the case with ALGN. Should it get there or if Align finds its footing before falling that far, see how it handles a bounce back to ~$220. 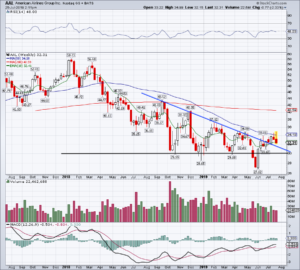 American Airlines (NASDAQ:AAL) has been a volatile one, rotating between plunges and rallies. On Thursday it’s in plunge mode, with shares falling almost 8% on disappointing earnings results.

AAL broke below long-term support near $30, before quickly reclaiming this level in June. The stock then reclaimed downtrend resistance (blue line) in what turned out to be a rather bullish development.

Below that and the June lows are in sight. This is great for traders, though. Either support between $30 and $31 holds and AAL stock can rally, or it fails and it’s a reasonable short. 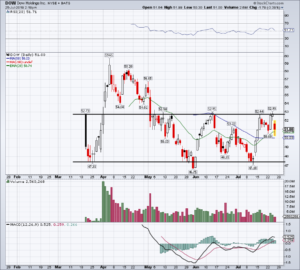 Dow Inc (NYSE:DOW) is still trying to find its footing in the public markets. However, Thursday’s earnings report isn’t helping matters, sending shares lower by about 4%.

While beating earnings estimates, the company missed on revenue expectations. Still, shares yield 5.5% at current prices. Luckily, we also have a solid setup on the charts.

Either shares continue to bounce higher or they move lower. If it’s the former, let’s see if Dow can clear resistance at $52.75 to $53, triggering a breakout. If it’s the latter, see if Dow takes out Thursday’s lows and the 50-day. If it does, range support at $47.50 is on the table.