The stock markets got off to an explosive start on Monday, ripping higher as investors read about a so-called trade truce between the U.S. and China and as oil prices rallied yet again. The indices logged decent gains, but individual stocks faded hard off the open. It was discouraging for bulls to say the least. 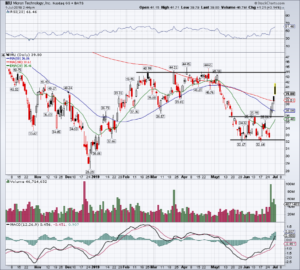 Click to EnlargeMicron (NASDAQ:MU) was among those early-morning winners. While shares pulled back off the highs, they were still up more than 3% on the day. Plus, the stock is toting a massive four-day gain of almost 20%.

On the initial post-earnings rally, shares gapped up and closed just under the 50-day moving average. The next session carried it through the 50-day, but stalled at the 200-day. The next day, MU closed above the 200-day.

The volume has been strong on this run too, making it even more encouraging. Ideally for bulls, MU stock will be able to hold up over its 200-day moving average. If it can’t though, holding above the 50-day is important. It’s not that the 50-day carries more significance than the 200-day — although based on the last year of price action mapped out above, one could certainly make that case — but because of another consideration.

The 50% retracement from the stock’s pre-earnings close to the post-earnings high sits at $37.15, not far above the 50-day.

Below that and we’ll need to see if $36 acts as support. 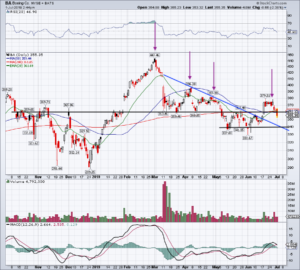 Of all the stocks that caught a lift on Monday, Boeing (NYSE:BA) was not one of them. The stock started off underwater on the day and kept on sinking.

The fall dropped BA stock below the vital $360 mark. Not only was this prior range resistance turned support, but it also stood as support after the 737 Max news broke. Making matters worse, all of Boeing’s major moving averages are within $1 to $2 of $360.

Now below it, it’s possible this level serves as resistance on a possible rebound. It also opens up the possibility of a decline down to the May/June support area, around $337 to $340. 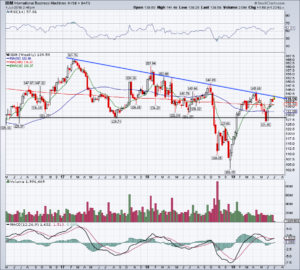 Click to EnlargeInternational Business Machines (NYSE:IBM) is up slightly on the day, but is well off its morning highs. Most of tech can make the same claim, though. The stock is holding up well over its major weekly moving averages, but downtrend resistance (blue line) is keeping it pinned down. 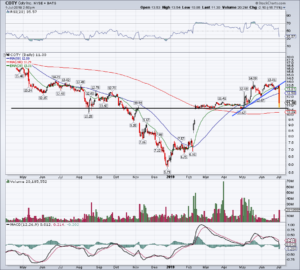 Shares of Coty (NYSE:COTY) are getting crushed Monday, falling more than 15% after announcing its turnaround plans.

In doing so, it’s bringing Coty stock back to familiar territory. $10.50 was a notable level of support from February through April. Just below at $10.29 is the 200-day moving average.

Coty is too volatile for me, but on a deeper decline into potential support, aggressive bulls may try to take a flyer on this one where the risk is at least defined.