Global equities are being smashed lower on Monday after President Trump — no doubt empowered by the S&P 500’s run to a new record high on Friday — put the squeeze on Beijing by announcing Sunday in a series of tweets that trade talks weren’t going so well after all. He threatened to raise tariffs on Chinese imports into the United States further on Friday.

Suddenly, after months of teasing a trade deal, another round of escalations seems likely. In fact, the U.S. Navy recently sailed two destroyers through the South China Sea. North Korea, no doubt with Beijing’s blessing, recently test-fired another ballistic missile. There is a geopolitical element to this that is worsening as well.

As a result, markets look vulnerable to a significant pullback here as the post-December uptrend has grown overhyped — from Uber’s upcoming IPO to a realization the Federal Reserve perhaps isn’t as dovish as the bulls were hoping, with Chairman Jerome Powell wondering aloud whether inflation could soon surge higher.

A number of large-cap stocks are feeling the pinch from the change of theme. Here are four trade war stocks to sell: 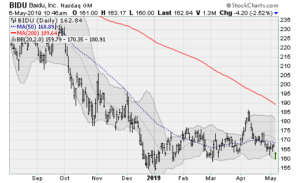 Shares of Chinese internet giant Baidu (NASDAQ:BIDU) are breaking down below a six-month consolidation range that marked a 40% decline from the highs set last year. The move puts the early 2016 lows near $140 in play, which would be a further 20% loss from here. The stock was recently downgraded by analysts at China Renaissance.

The company will next report results on May 16 after the close. Analysts are looking for an earnings loss of 10 cents per share on revenues of $3.6 billion. When the company last reported on Feb. 21, earnings of $1.92 beat estimates by 11 cents on a 9.4% rise in revenues. 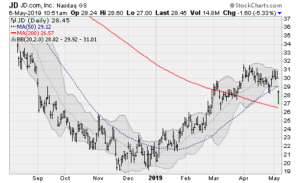 China internet retailer JD.com (NASDAQ:JD) is watching helplessly as its shares drop hard below their 50-day moving average, putting an end to a nice six-month uptrend and setting up a fall below its 200-day moving average. The stock had suffered a 60%+ decline from its early 2018 highs into the lows set late last year. A retest of those lows looks likely now, which would be worth a loss of nearly a third from here. 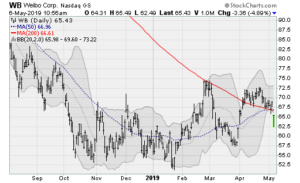 Weibo (NASDAQ:WB), China’s Twitter (NYSE:TWTR) knockoff, created thanks to the communists’ desire to control the flow of information online, has fallen back below its 200-day moving average after a short-lived attempt to challenge the late-February highs. This was the first move into uptrend territory since stocks lost more than half of their value falling away from the early 2018 record high. 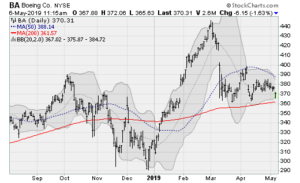 Things are going from bad to worse for Boeing (NYSE:BA), as its airplanes are a key strategic export from the United States to China at a time when the Chinese are rapidly developing their own aerospace industry. What’s more, the company is still reeling from the ongoing problems with the 737 MAX and the legal fallout from two fatal crashes over the past year.

Shares are breaking down out of a five-month pennant pattern, setting up a decline back below its 200-day moving average. The company will next report results on July 24 before the bell. Analysts are looking for earnings of $1.8 per share on revenues of $21.5 billion. When the company last reported on April 24, earnings of $3.16 missed estimates by 3 cents per share on a 2% drop in revenues.

B2Gold not buying Zimbabwe project, not interested in M&A