Thanks to another well-timed tweet by President Donald Trump, U.S. equities are bouncing back on Tuesday on fresh hope for a U.S.-China trade deal. Also helping was Trump’s disputing of a New York Times report that the Pentagon is reviewing a military plan for Iran that involves sending 120,000 troops to the Middle East.

This stands in stark contrast to the fears in play on Monday, with China vowing retaliatory measures including curtailing imports of Boeing (NYSE:BA) aircraft and the dumping of U.S. Treasury holdings.

The move was enough to push the Dow Jones Industrial Average back above its 200-day moving average and is focusing buyer attention on the handful of stocks that have largely ignored the month-long bout of volatility. Here are five worth a look: 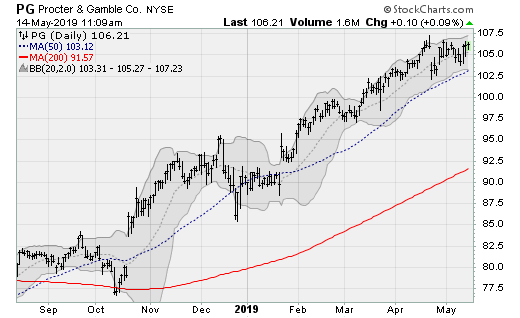 Procter & Gamble (NYSE:PG) shares have shaken off the broad market pressure to keep marching higher, inching towards a new record high as it keeps riding support near its 50-day moving average. Shares were also barely affected by the volatility seen late last summer as well, continuing an uptrend that started in April 2018 that has seen shares gain more than 50%.

The company is scheduled to next report results on July 30 before the bell. Analysts are looking for earnings of $1.05 per share on revenues of $16.9 billion. When the company last reported on April 23, earnings of $1.06 per share beat estimates by two cents on a 1.1% rise in revenues. 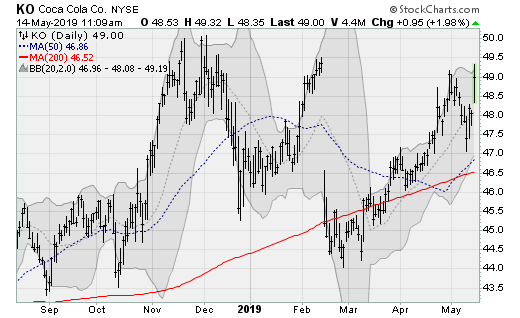 Shares of Coca-Cola (NYSE:KO) are rising up to challenge resistance from double-top highs near the $50-a-share threshold. Zooming out, the stock has been in a steady if somewhat choppy uptrend since the 2009 bear market low — the very definition of what you would expect from a well-run consumer staples company. 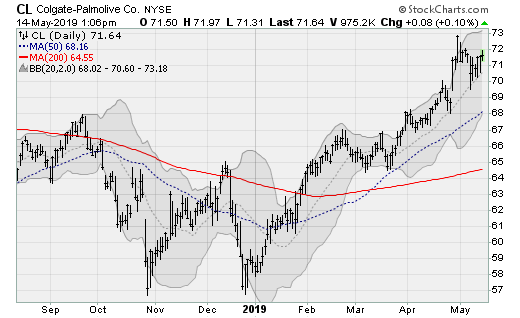 Shares of Colgate-Palmolive (NYSE:CL) are pushing higher to challenge highs the stock last set in early 2018. This continues a sideways channel that has been in place since the middle of 2016. Shares were recently upgraded to “buy” by analysts at Zacks, who are looking for a $80-a-share price target.

The company will next report results on July 26 before the bell. Analysts are looking for earnings of 72 cents per share on revenues of $3.9 billion. When the company last reported on April 26, earnings of 67 cents per share beat estimates by a penny on a 2.9% drop in revenues. Management reaffirmed its relatively bright 2019 outlook as well. 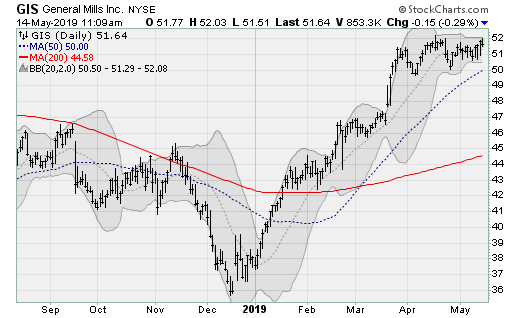 General Mills (NYSE:GIS) shares are continuing to attempt a breakout up and over three-month resistance near the $52-a-share level, setting up a run at its early 2018 highs near the $57-a-share level. Such a move would be worth a gain of nearly 10% from here. Shares have been trading at a discount to the average consumer packaged goods stock this year, making its relative price stability even more valuable in these volatile times. 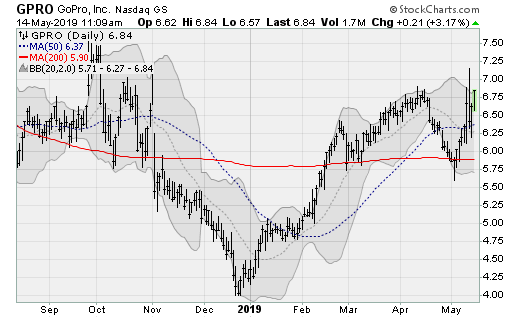 GoPro (NASDAQ:GPRO) is something of an unusual pick for this list, on account of its position as a turnaround consumer electronics name. Shares have cratered since reaching a high in late 2015, losing some 95% of their value into the low set in December. Since then, shares have been scrambling higher and are pushing up and over their April high today.

The company will next report results on August 1 after the close. Analysts are looking for earnings of four cents per share on revenues of $301 million. When the company last reported on May 9, a loss of seven cents per share beat estimates by two cents on a 20.1% rise in revenues.

Before I give my fiancée a $7,000 diamond engagement ring, I want her to promise to bequeath it to my daughter