Tech stocks among most U.S. equities are getting hammered on Friday as the U.S.-China trade talks ended in acrimony, with the President Donald Trump administration pushing ahead with higher tariffs on $200 billion worth of Chinese imports. The tariff rate will increase from 10% to 25%. Additionally, Trump announced they are starting the process of slapping another 25% tariff on the remaining $320 billion of Chinese imports thus far not affected by the trade standoff.

China, for its part, has vowed to take retaliatory measures.

This is pretty much the worst-case scenario, coming after months of hinting and teasing in the press that a deal was forthcoming. Tech stocks in particular are looking vulnerable here, as they are highly sensitive to global supply chain linkages. Higher tariffs will directly eat into profitability margins.

As a result, the group is slumping. Here are five tech stocks to sell now: 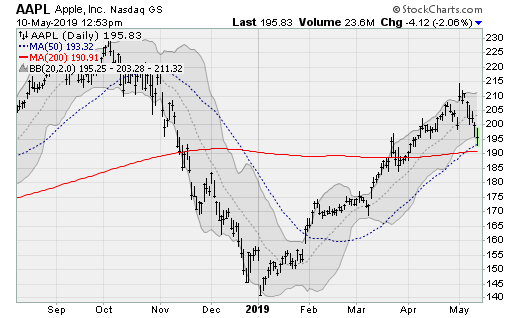 Apple (NASDAQ:AAPL), which loves to tout that its products are “Designed in California,” has thus far avoided being impacted by the Chinese import tariffs Trump has enacted, as the product codes for its iPhone and Airpods and other devices have been left out of the regulatory changes. But with Trump threatening to tariff all products, the company will soon no longer be able to skirt higher customs costs.

Investors are dumping shares in response, and AAPL stock is threatening to fall below its 50-day moving average for the first time since October. Watch for a possible decline down to the February-March lows, which would be a worth a decline of roughly 13% from here. The company will likely next report results on July 30 after the close. Analysts are looking for earnings of $2.11 per share on revenues of $53.5 billion. 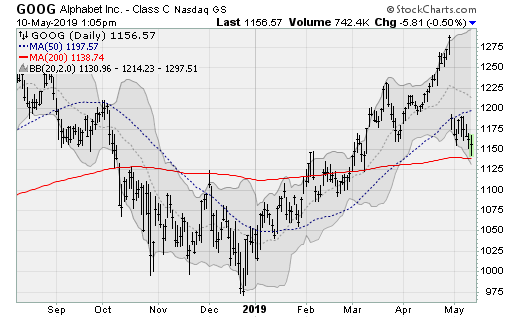 Shares of Google parent Alphabet (NASDAQ:GOOG, NASDAQ:GOOGL) have pulled back violently from a recent push to record highs, collapsing below their 50-day moving average and closing in on the 200-day average. This after the tech stock reported a surprise revenue miss late last month, posting the slowest growth in four years as ad pricing came under pressure.

This is a bigger deal than it seems at first, since so much of the technology ecosystem depends on display and text ad pricing. Prior to this, the company last reported on Feb. 4, with earnings of $10.95 beating estimates by four cents on a 16.7% rise in revenues. 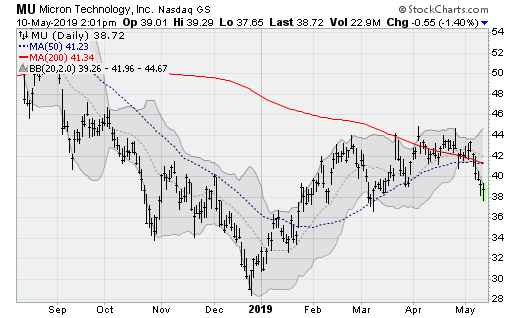 Micron Technology (NASDAQ:MU) shares are falling below both their 50-day and 200-day moving averages, threatening to break the March-low support and return to the lows not seen since December. Such a move would be worth a loss of more than 25% from here. The tech stock’s China segment revenue is at risk from deepening trade tensions and a possible nationalist blowback against Apple products in China, which Micron supplies components for.

The company is scheduled to next report results on June 19 after the close. Analysts are looking for earnings of 85 cents per share on revenues of $4.8 billion. When the company last reported on March 20, earnings of $1.71 beat estimates by five cents on a 20.6% decline in revenues. 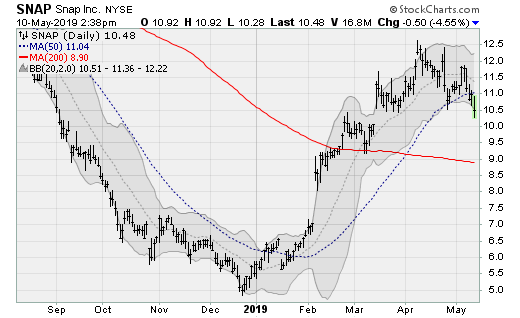 While Uber (NYSE:UBER) is getting all the IPO attention these days, 2017 IPO Snap (NYSE:SNAP) is coming under pressure as the social media darling continues to struggle after an ill-reviewed Snapchat redesign and an odd move to relabel itself a “camera company” with its Spectacles wearable device (which are horribly ugly, by the way). 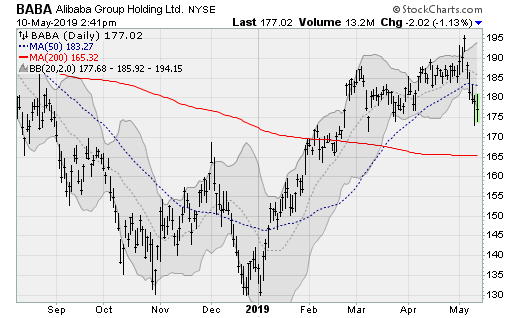 Speaking of Uber, it is the largest IPO by market cap after eclipsing Chinese e-commerce giant Alibaba (NYSE:BABA). Shares are drifting lower on worries about the domestic Chinese economy in the wake of higher U.S. tariffs. Shares are threatening to fall out of a four-month consolidation range, setting up a retest of the October-December lows. Not exactly what KeyBanc Capital Markets analysts expected when they raised their price target to $240 back on May 7.

The company will next report results on May 15 before the bell. Analysts are looking for earnings of 98 cents per share on revenues of $13.4 billion.

As of this writing, William Roth did not hold a position in any fo the aforementioned securities.

Microsoft in Talks to Acquire TikTok While Trump Seeks A Cut