Bulls are doing a great job at extending this bounce. After a strong “Turnaround Tuesday,” they pushed stocks higher on Wednesday and are keeping the markets elevated on Thursday. It gives us a tricky set-up going into Friday — especially with the non-farm payrolls report coming out before the open. Let’s look at some top stock trades ahead of it. 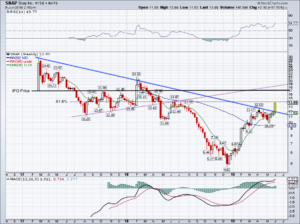 Shares of Snap (NYSE:SNAP) are moving higher on the day, climbing over 8%. Shares are quickly up about 40% from its lows last month and breaking out over long-term downtrend resistance (blue line).

Just over $14 is the long-term 61.8% retracement. If this level acts as resistance, we have to let Snap digest some of this rally. As long as it holds the backside of prior downtrend support and the 10-week moving average though, it’s still okay. 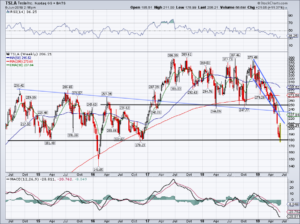 Shares of Tesla (NASDAQ:TSLA) are finally fetching a bid, after a big-time breakdown that InvestorPlace readers saw coming. The stock bounced hard off the $180 level and has actually found itself back over $200.

Now things get tricky. If you’re a trader and were long off that $180-ish test, it may be time to book some profits or at the very least, raise stops.

The stock filled last month’s gap and is coming into the backside of prior channel support. If this level acts as resistance, Tesla stock could retreat. For bulls to gain any lasting momentum, TSLA needs to clear this mark as well as the 10-week moving average. 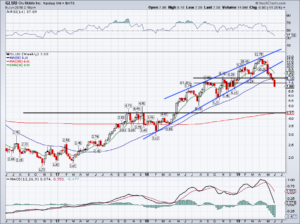 Shares of Glu Mobile (NASDAQ:GLUU) are sinking Thursday, falling over 8% in the session.

The selling pressure has been strong in this one, with long-term uptrend support giving away last month. Now shares are below $8 — resistance in 2018 and support in 2019 — and the 50-week moving average. The stock also lost the 61.8% retracement for the one-year range.

So now what? From a trading perspective, I would consider GLUU a no-touch for me. At least until it finds its footing. If it does, see how it does on a retest of these key areas, mainly between $7.50 and $8. 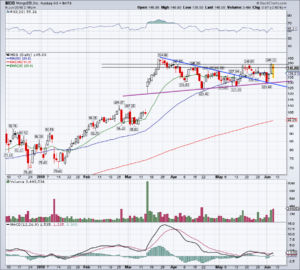 Shares of MongoDB (NASDAQ:MDB) initially sold off and looked to be breaking down after the company reported earnings. The stock broke below the 20-day and 50-day moving averages in morning trade before reclaiming them later in the session. It also broke yesterday’s lows and reclaimed them as well.

Those were bullish signs for short-term and day traders. But what about the swing trader or swing investor?

The stock holding $145 is a good start, but clearing $150 is better. North of that and MDB can challenge new highs near $155 and look to breakout even further.

Below the 50-day moving average, and uptrend support (purple line) is on the table. If that fails to buoy MDB, then the backside of prior downtrend resistance (blue line) is possible. Should both marks fail, a gap fill down to $105 is technically possible. 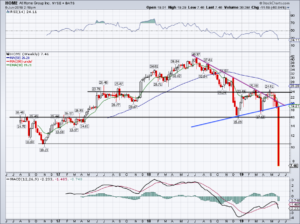 Yikes. Of all the ugly moves we’ve seen over the past month, At Home Group (NYSE:HOME) is up there with the worst of them. Down 56% on the day and there’s not many positives on this chart.

The stock blew right through uptrend support (blue line), range support at $16 and its prior lows from 2016 at near $10. This one is definitely a no-touch for me. Don’t be a hero. There are much better trades out there, even of the “dumpster dive” variety.

Should this one snap-back any time soon, see how does with a retest of its prior lows.

What is Decision Fatigue and How Can You Outsmart it?