A day after the Fed’s statement on Wednesday, the stock market ripped higher Thursday. On Friday, it cautiously hovered around flat as investors contemplate the Fed, the trade war and potential geopolitical issues with Iran. That said, there are some solid moves in individual names, leading the way for our top stock trades. 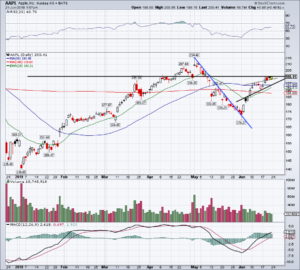 I really like the way Apple (NASDAQ:AAPL) is coiling just below $200. The FANG + Apple group came into Friday’s session 13% or more below their all-time highs, with the exception of Amazon (NASDAQ:AMZN), which was about 6% below its highs.

It will be hard for the Nasdaq to hit new highs with this lagging action under way. If the trade-war rhetoric starts to improve though, AAPL could be a big winner. 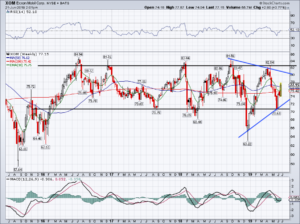 Click to EnlargeAbove is a long-term weekly chart of Exxon Mobil (NYSE:XOM). While not displayed, the stock barely reclaimed and closed above both its 50-day and 200-day moving average on Thursday. On Friday, it added to those gains, as it’s now over the 50-week moving average as well (that’s actually shown above).

I want to see if XOM can put together a rally up toward $80, currently downtrend resistance (blue line). Above that mark calls for a test of range resistance near $83. Should shares falter from current levels, a decline to its 200-week moving average near $75 is in play. Below that and uptrend support around $73 is on the table, with range support at $70 just below that.

Keep it simple and visual. 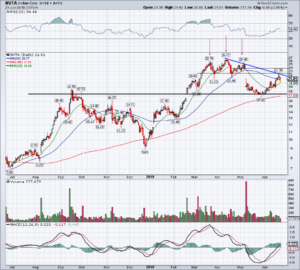 Invitae (NASDAQ:NVTA) really burst onto the scene this year, running from about $10 in January to $26.77 in April. Wow, what a run! But the whole long setup fell apart when a head-and-shoulder formation sent shares reeling once neckline support near $22.50 gave way.

Since then, $17 support held up fine as shares have been making their way higher once again. Friday’s action looked disappointing, but long-term bulls have to be happy with it holding its 20-day and 50-day moving averages.

NVTA is a speculative holding, but looks set for big long-term gains in my view.

I would love to see it push through this $22 to $22.50 area, which marks prior neckline support as well as downtrend resistance (blue line). If it does, look for a gap fill up toward $24. If it can’t push through $22.50, see if its moving averages can buoy the name again. 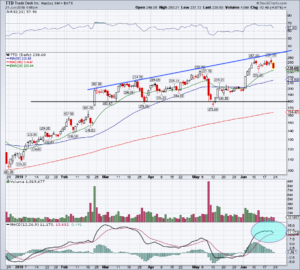 Another high-octane growth name has been The Trade Desk (NASDAQ:TTD).

Earlier this month, we called TTD a better sell than buy up near $260 channel resistance. While it wasn’t overbought, going from $200 to $260 in just five trading sessions was too far, too fast.

Momentum is starting to roll over (blue circle) and TTD is coming under pressure. I don’t know if the 20-day saves it or if it will fall to the 50-day. Will it return to $200? I really don’t know — no one does.

However, bulls who wisely took profits can start to rebuild a position near any of these key levels. It just depends on how comfortable they feel with the potential risk. $231 marked the recent low this month, so perhaps the 20-day isn’t a bad spot to nibble. I would love another shot at TTD closer to $200 though. 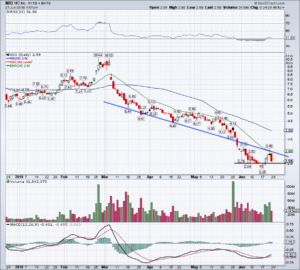 This is another one we recently warned investors about. Nio (NASDAQ:NIO) stock rallied up to prior downtrend support and the 20-day moving average.

On Friday, these marks ruthlessly swatted Nio lower, as shares collapsed more than 8%. Now the $2.50 level is back on the table. Below and Nio stock will look quite ugly. Simply put, this is not one I want to be long.

If $2.50 holds, we need to see a move over the 20-day and downtrend resistance before it’s even close to being a buy.

BA Stock: Is it Time to Get Back Into Boeing Stock?