The jobs report for April smashed expectations and that’s leading to a strong rally on Friday. It’s got a lot of high-quality companies rallying on the day too. Let’s take a look at our top stock trades to watch on Monday. 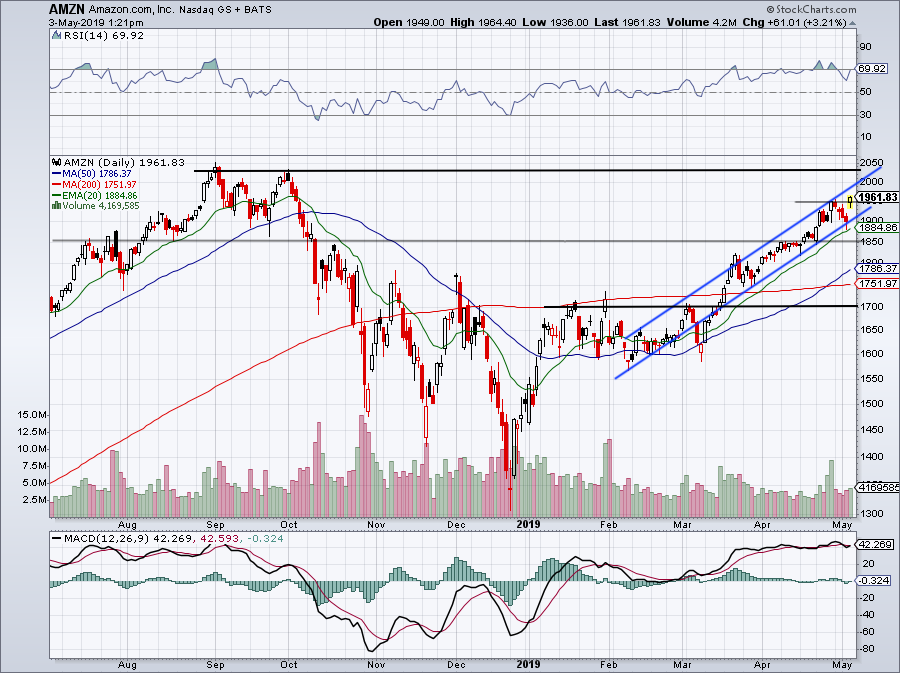 Amazon (NASDAQ:AMZN) posted a big breakout over $1,750 in March. InvestorPlace readers nailed that trade as AMZN trended higher into earnings a few weeks ago.

Post-earnings, AMZN found resistance at $1,950 and on Thursday, it posted a sweet bounce off the 21-day moving average. As tempting of a buy as this was, some investors were unsure of the market’s climate thanks to Fed comments a day earlier.

Now shares are bursting through $1,950 after Buffett’s Berkshire Hathaway (NYSE:BRK.A, NYSE:BRK.B) has taken a position in the name (although not by Buffett himself). In any regard, this opens up the door to channel resistance near $2,000 and its all-time highs at $2,050 above that.

Above the 20-day moving average and uptrend support, and I don’t see any reason to turn bearish on Amazon now. 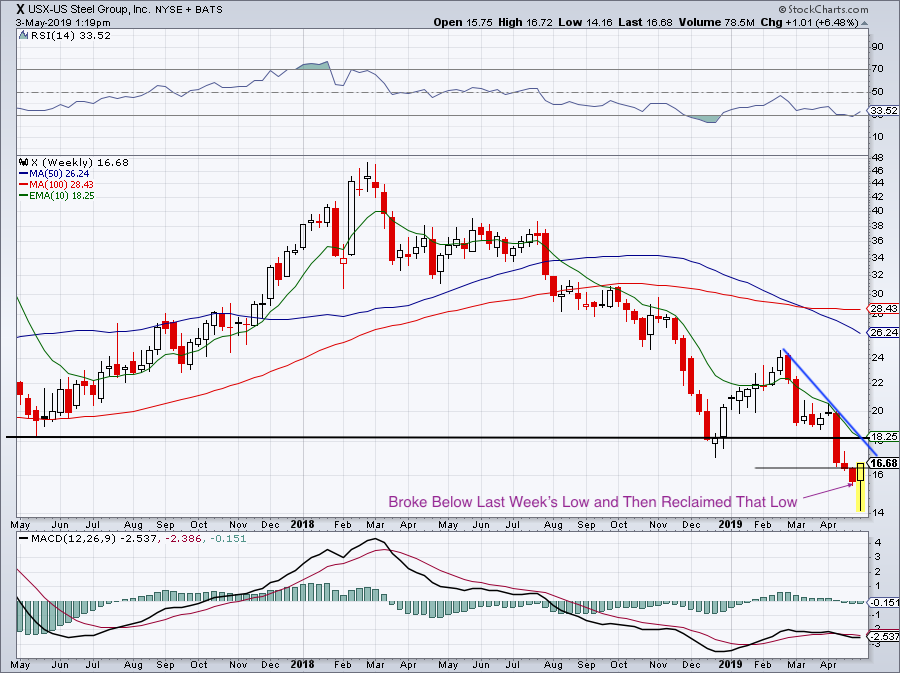 That’s a really encouraging setup, especially for a volatile name like X. I would like this name a lot more over $18. That means X would have to clear downtrend resistance and the 20-day moving average, but it would give a lot more room to the upside. 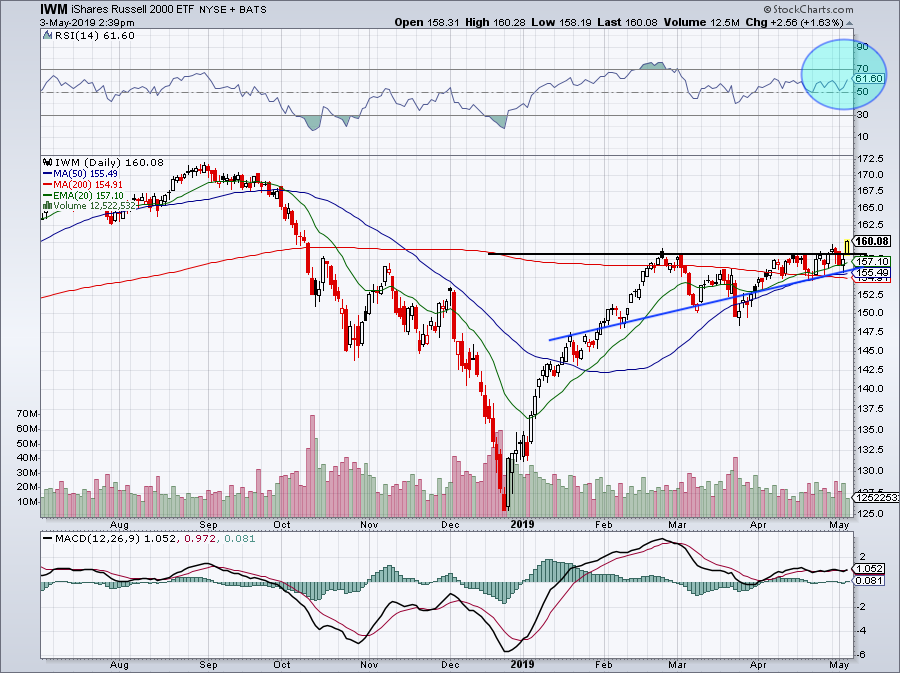 The iShares Russell 2000 ETF (NYSEARCA:IWM) is up nicely on the day, climbing over 1.5% and finally breaking out over resistance. We flagged this one a few days ago and have been patiently waiting for some action.

With the RSI (blue circle) nowhere near overbought and the IWM severely lagging other large cap U.S. indices, this one could gain some serious momentum into next week. Below $158-ish, and this one becomes discouraging.

For those that didn’t go long on Thursday or Friday, look for a quick pullback early next week into the $158 to $159 area and for this area to hold as support. Otherwise, it might be time to look for other setups. 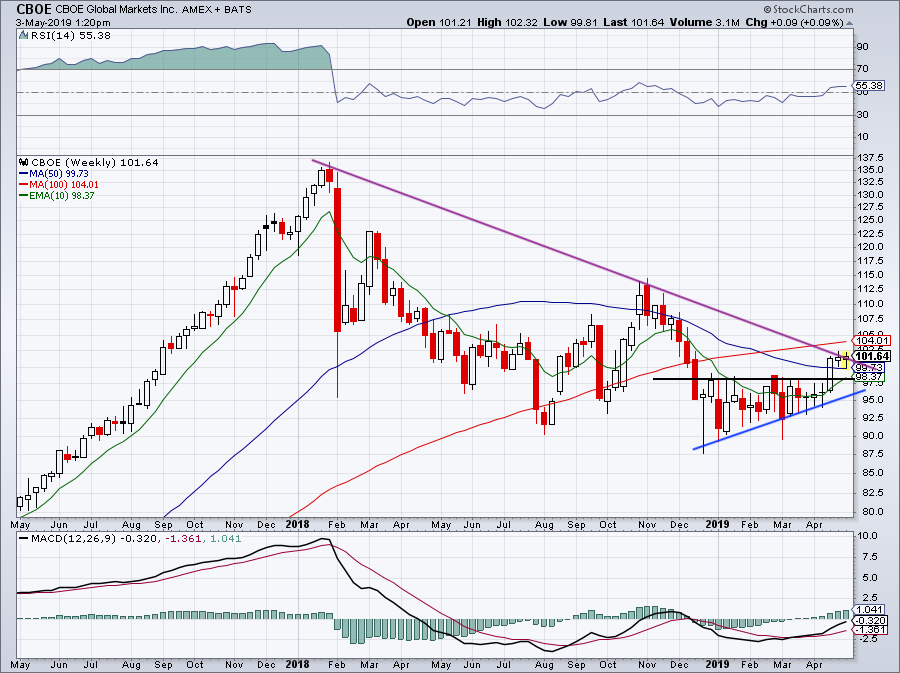 Shares of CBOE (NYSE:CBOE) are barely moving, up 1.5%, despite a top- and bottom-line earnings beat on Friday morning.

A little below the two-week low looks like a good spot for one, but as long as it holds $98, CBOE still looks good on the long side. It’s flirting with a bigger breakout over downtrend resistance (purple line), which would send it to the 200-week moving average. Above that and CBOE has room to $107.50. 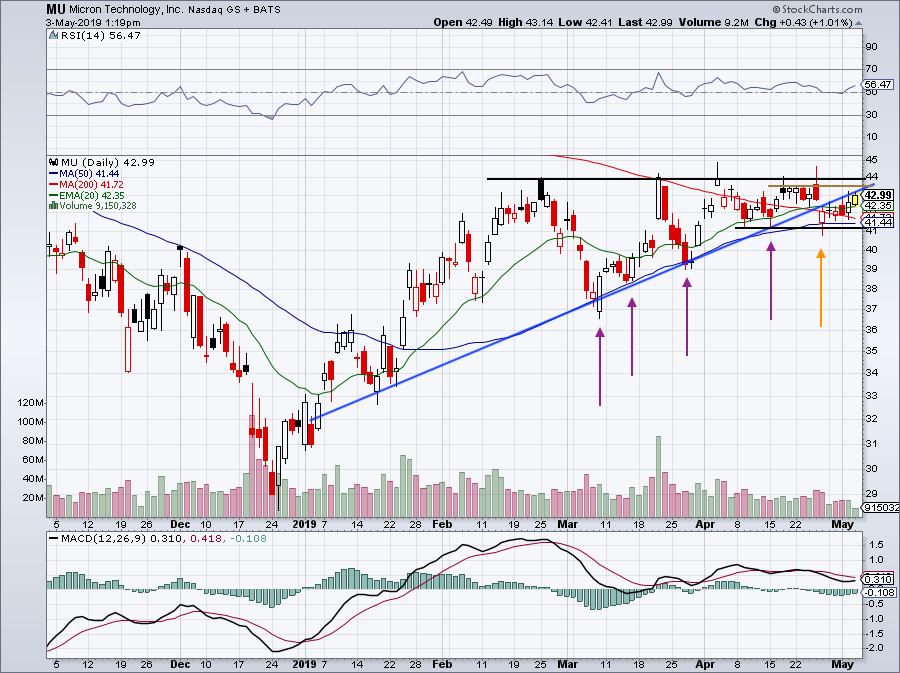 Talk about watching paint dry. We were lucky and hit a couple of breakouts this week in Johnson & Johnson (NYSE:JNJ) and Alibaba (NYSE:BABA). But the moves have been underway for weeks now, which is exactly the type of action that burns short-term options buyers.

In any regard, this Micron (NASDAQ:MU) trade has yet to breakout — and it’s taking a painstakingly long time to find out. The stock is flirting with a big move over $44 and I’m not sure when or if that move will pan out. In any regard, MU should be on investors’ radar.

There are a few caution flags though.

This stock was making a series of higher lows (purple arrows) until last Friday. While the stock recovered the losses intraday and closed above its prior low, its lows did negate that trend. It’s not the end of the world, but something to note. Further, notice how the stock is creeping up along the backside of prior uptrend support. Is it starting to act as resistance? Perhaps.

If Micron can’t get above $43.50, it may start notching lower highs. Admittedly, MU is a bit of a mixed bag right here in the short term. Let it play out and see if it can breakout over $44. Be careful of a false breakout, which MU has done for its last two moves over $44.

I would love a strong gap up early next week back over uptrend support and into $44 to setup a possible breakout.

How to Survive & Thrive in today’s Market