U.S. stocks retreated on Friday, but certainly haven’t cratered over the last few sessions. It looks like the stock market is simply digesting its big gains from last week. Will this weekend or next week carry increased risk? We’ll see. Until then, let’s look at a few top stock trades. 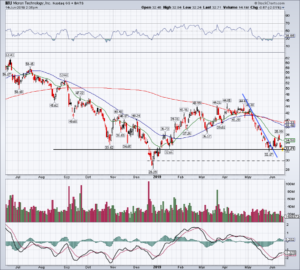 Micron (NASDAQ:MU) is under pressure like most memory and chipmakers on Friday. However, that follows very discouraging action from this week, after MU stock topped out near $36. Already it’s down almost 10% from those levels.

If it loses Friday’s lows, it could be a slippery slope for Micron. In that case, a drop down to $30 could be in the cards.

If semis and tech catch a bid next week, see that Micron can hurdle $34 and its 20-day moving average. Otherwise, this one looks risky on the long side, particularly with a percolating trade war. 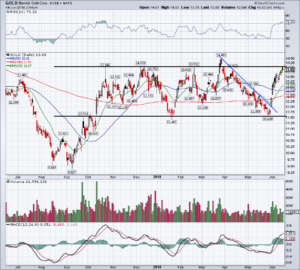 The recent rally has taken GOLD right into range resistance. Of course, it’s possible that the stock is able to breakout. But I’d rather play the move after the fact than bet on it happening beforehand.

If range resistance is in fact resistance, look for GOLD to pullback into its 20-day to 50-day moving average range, between $12.82 and $13.07. A breakout over $14 could trigger a larger move higher. 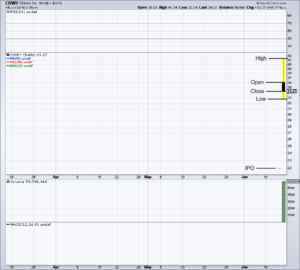 Chewy (NYSE:CHWY) made its public debut on Friday, erupting from its $22 IPO price and opening at $36. Here are 14 things to know about the company.

Shares are not exactly reminiscent of Lyft (NASDAQ:LYFT), as they back off the opening level highs, but they do share some resemblance. Investors are now trying to figure out if this IPO is going to be an Uber (NYSE:UBER)/Lyft debacle, or a Zoom Video (NASDAQ:ZM)/Beyond Meat (NASDAQ:BYND) situation. Truth is, no one knows.

Risk-taking speculators can take a flyer on CHWY, banking that higher prices are here to come. At the end of the day though, trading day-one IPOs is really just speculation. No one really knows which way it will go.

Just know its range. Over the IPO open price of $36 and CHWY can run to its day-one highs near $41 and possibly higher. Below its day-one low and shares can move lower, although I’d be surprised to see it down to $22 anytime soon. Trading this close to the IPO date isn’t for me. 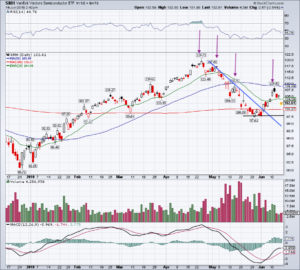 Click to EnlargeThe VanEck Semiconductor ETF (NYSEARCA:SMH) is under pressure Friday, falling about 2.5% thanks to the earnings results from Broadcom (NASDAQ:AVGO). The latter beat earnings estimates, but provided a tepid outlook as the trade war continues to weigh on its business.

While AVGO was the catalyst Friday, a whole host of stocks will drive the SMH going forward. Nvidia (NASDAQ:NVDA), Advanced Micro Devices (NASDAQ:AMD), Micron and others will all have an effect.

As for the ETF, the 50-day promptly rejected the SMH, while the 20-day could do little to buoy the name. That leaves the 200-day — which didn’t help much last month — and last month’s lows near $97.50 as the must-hold spot.

Below those lows opens the SMH to a drop to the sub-$93 area. On a rebound, we need to see the SMH’s series of lower highs (purple arrows) cease and for the SMH to clear its 50-day moving average.

Bottom line: Watch the 200-day and last month’s lows if the decline continues. Watch the 50-day and $109 if the SMH rebounds. 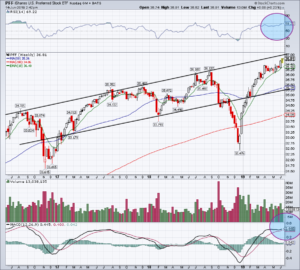 The iShares Preferred Stock ETF (NYSEARCA:PFF) has been on fire. But could the run be coming to an end?

Once the PFF reclaimed its 10-week moving average, it has been on absolute fire. That was in the last week of December, by the way. In any regard, multi-year channel resistance is up near $37, while the MACD and RSI (blue circles) are suggesting momentum could be topping out as the ETF flirts with an overbought condition.

That’s not to say the PFF can’t go to $37, $38 or even higher. Just that over the past few years, this resistance mark has generally kept a lid on the stock. Investors will likely keep buying on pullbacks into the 10-week moving average until it fails. If and when it does, a drop down toward channel support and the 50-week moving average could be in the cards.

Do you know enough about pre-delivery inspections to do one yourself? Probably not

Neglected market feeling the worst effects of the affordability crisis