The stock market put together a decent rally on Wednesday, adding to Tuesday’s gains as tech led the way higher. Bulls are hopeful that more gains are to come, while others may look at the rally as an opportunity get short or lighten up their long exposure. Let’s look at some top stock trades ahead of Thursday. 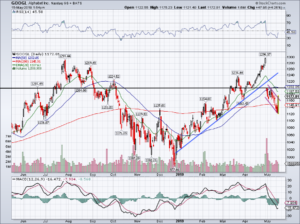 Click to EnlargeDid investors sleep on this one too long? Alphabet (NASDAQ:GOOGL, NASDAQ:GOOG) has been a dog since its earnings report in April, but that’s not what we saw on Wednesday. Shares are erupting more than 4% on the day, up about $50 apiece.

The move forms a bullish engulfing candle, as shares took out Tuesday’s lows before rocketing higher above the prior session’s high. Now what?

Just $15 above current levels and GOOGL will hit its 20-day moving average. This moving average was prior support over the past few months, gently guiding Alphabet stock higher. We’ll see if there’s a “change in tone” with the stock now if this moving average acts as resistance. 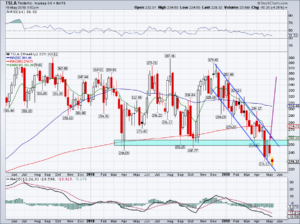 The capital raise gave a temporary boost to Tesla (NASDAQ:TSLA) earlier this month. However, once TSLA broke below long-term range support near $250, we’re now seeing this level act as resistance. That’s emphasized by the chart’s purple arrow.

For now, Tesla remains trapped in a long-term downward channel. It will remain in that channel until either more downside breaks it down below support or bulls can rally through channel resistance. The issue for longs? They’ll now have to get through downtrend resistance and the $250-ish level to undo much of this technical damage. 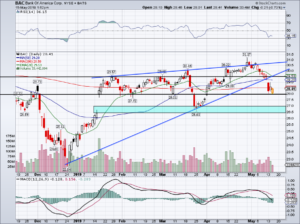 Click to EnlargeMany banks are trading well, but we’re not seeing the same “oomph” in Bank of America (NYSE:BAC). Shares are clinging to prior range support near $28 and haven’t cleared the 200-day moving average in Wednesday’s session. 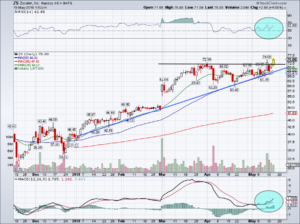 Click to EnlargeThis is a breakout we flagged earlier in the week, as we were looking for stocks that were showing notable strength amid the market’s recent correction. The 20-day moving average held as support for Zscaler (NASDAQ:ZS) all week, while the 50-day and uptrend support continue to guide shares higher.

Last week the stock peeked its head over the $72.50 level, but Monday’s selloff cut the rally short. After a few days of consolidation, we’re seeing a nice move in ZS. See that $72.50 holds as support now. Below and bulls may want to wait for a retest of support before getting long again. Aggressive bulls may consider buying a retest-and-hold of $72.50-ish, provided the overall market climate warrants it.

Notice how the RSI suggests shares aren’t overbought and the MACD shows that momentum is now in bulls’ favor (blue circles). If not for the trade-war worries, there would be much more confidence in this stock. 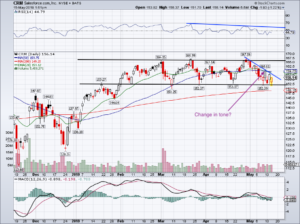 This one is really interesting to me, as Salesforce (NYSE:CRM) is a name I was long for quite some time. Shares have been range-bound for a few months now, bobbing between $150 and $166 since February.

Earnings aren’t until June 4th and even though the trade war has little to no impact on CRM, the stock just doesn’t have much mojo. Last week shares rallied off range support, but were stymied by the 20-day and 50-day moving averages (with the former crossing below the latter, indicating bearish short-term momentum). Downtrend resistance (blue line) has also keep a lid on the name.

Over $157.50 gets me interested, while a bounce over $160 gets me excited. Otherwise, bulls may want to wait for a pullback into the $152 range. Keep in mind that if CRM can’t get above downtrend resistance, a break of range support may be in the cards. That puts a test of the 200-day immediately on the table, with lower prices to come should that fail as support.

Rich Uncles vs. Fundrise vs. PeerStreet: Which is Better?