After a bruising close on Friday, U.S. stocks bounced back a bit on Monday. That’s as investors gear up for some big-time earnings reports later this week. By individual stock standards, the mellow trading days this week are over once we hit Tuesday. Let’s look at some top stock trades going forward. 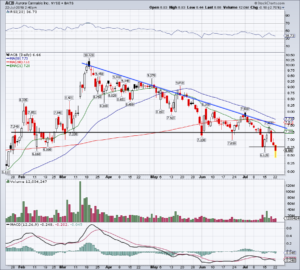 Earlier this month we pointed out the bearish setup developing in Aurora Cannabis (NYSE:ACB), which was a bearish descending triangle. We saw a robust rebound in the ensuing days, but it was merely a check-back trade to resistance.

On Monday, shares broke below last week’s lows and are looking increasingly unattractive. While this one may be too risky for investors to hold outright short, I wouldn’t be long until ACB either gets significantly cheaper or it can clear overhead resistance. 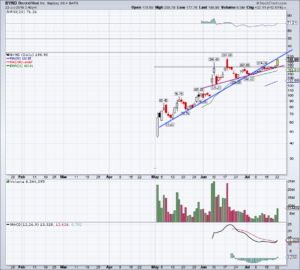 Shares of Beyond Meat (NYSE:BYND) will report earnings on July 29th, but the stock is heating up on Monday, up over 11%.

Beyond Meat stock burst through $175 resistance and is now hitting the backside of prior uptrend resistance (blue line). If I’m long BYND stock coming into Monday, I’m taking some or all profits on this move.

I wouldn’t be surprised to see the stock take out its $201.88 high ahead of earnings, but I would be de-risk ahead of the event if I’m trading (not owning) the name. 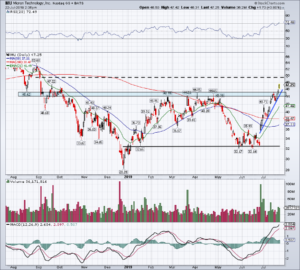 We have been flagging Micron (NASDAQ:MU) for InvestorPlace readers all month. Earlier this month, we pointed out that Micron was running into resistance near $44 to $45. On Friday we said the stock is breaking out and on Monday we’re seeing a big move higher on a Goldman Sachs upgrade.

Let’s see if the stock can continue higher and fill the gap back toward $49.50. Otherwise, I would love a pullback in the next day or two down to $45 or $46. Traders can buy that pullback, with a close below $44 as their stop.

If the pullback finds support, a move toward $49.50+ could be in the cards. 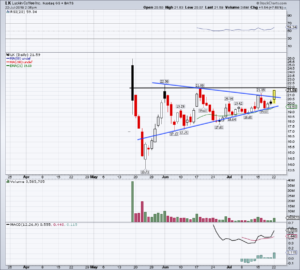 Maybe it’s the insane run in Starbucks (NASDAQ:SBUX) helping fuel the nice breakout in Luckin Coffee (NASDAQ:LK). At the end of the day though, the “why” doesn’t matter so much as the “what” — and what’s happening here is a nice move to the upside.

Shares are surging more than 8% as momentum traders pick up on the scent. LK has been building a beautiful post-IPO wedge for a few months now and is now resolving higher.

A move over $22 would be most attractive, but we also need to see if it will act as resistance. On the downside, see that prior downtrend resistance (blue line) acts as support. 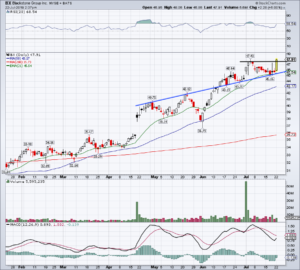 Blackstone (NYSE:BX) reported earnings last week, but the stock was relatively muted after doing so. That’s not the case on Monday, up almost 5% and hitting 52-week highs in the process.

I love this name, as it made a perfect check-back down to its 20-day moving average and consolidated a bit ahead of — and after — earnings. Now hitting new highs, let’s see if BX can maintain above $47 to $47.50. If it can, $50 could be in the cards.

10 odd facts about marijuana that you probably never knew