Stocks stagnated on Monday, as investors gear up for the start of earnings throughout the week. Let’s look at a few top stock trades to kick off the week. 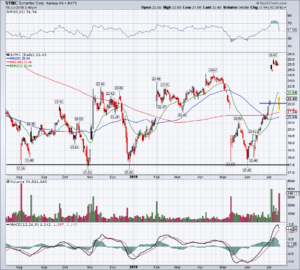 Broadcom (NASDAQ:AVGO) is reportedly walking away from talks to buy Symantec (NASDAQ:SYMC), causing the latter to drop by almost 12% on the day. On the plus side though, SYMC is rallying off its low.

Shares are up off the lows and north of the 200-day and 50-day moving averages. For those that feel compelled to buy SYMC — I am not one of them — they may want to consider using a stop loss at Monday’s lows. If that’s too tight, then we at least need to see the stock hold these two key moving averages.

See if it can climb over its 20-day moving average on the upside, or if it acts as resistance. 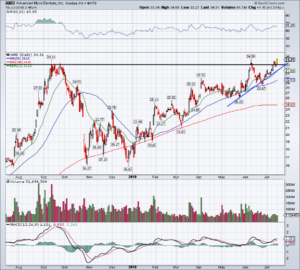 Advanced Micro Devices (NASDAQ:AMD) surged to $34 and backed off last week. On Monday, it’s right back to its bullish ways, pushing up to new highs. The stock is holding up over $34, while prior resistance at $33 is now proving to be support.

As long as this one holds the 20-day, uptrend support and $33, investors can keep riding it higher. Below and AMD may need some time to digest the gains. 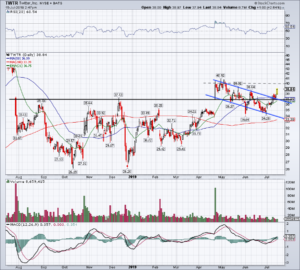 As far as upside targets go, $40 would bring TWTR back near its May highs, while a run to $42 would fill the gap from last July. Shares need to hold above $37 to keep the setup intact.

Netflix (NASDAQ:NFLX) remains range-bound, stuck between $340 and $385. If I were long NFLX, I would like to see the stock cooling off as it is ahead of its July 17th earnings report. Going in too hot could cause a selloff.

On its post-earnings reaction, see if NFLX can breakout over $385 or hold $340 on a pullback. Sooner or later, we’ll have some action. 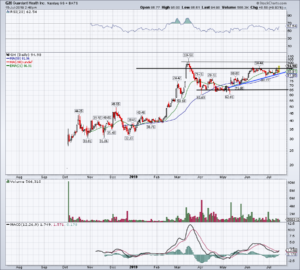 If prior resistance fails to hold as support, see that uptrend support near $85 holds.