After weekend news regarding the cancellation of tariffs on Mexico, U.S. stock were primed for more gains on Monday. While not as explosive as some bulls had hoped, others are pointing out just how far we’ve rallied over the past few days. Let’s look at some top stock trades as part of a busy Monday. 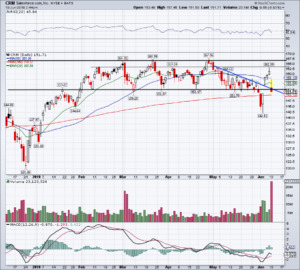 Salesforce (NYSE:CRM) was part of a loaded “Merger Monday” after it snapped up Tableau Software (NYSE:DATA) in an all-stock deal worth $15.7 billion.

So far though, shares aren’t reacting too kindly, down more than 6% on the news. The move drops shares below range support near $152.50, as well as prior downtrend resistance (blue line). CRM stock was able to hurdle the latter mark on its post-earnings rally last week. 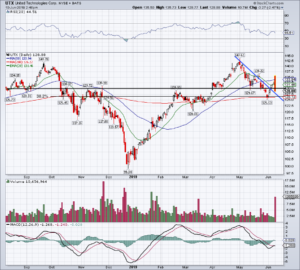 Topping CRM’s near-$16 billion deal is the mega-merger between United Technologies (NYSE:UTX) and Raytheon (NYSE:RTN). The tie-up has even drawn early concern from President Trump, which is likely why both stocks are off their session highs as investors worry about regulatory approval.

It was disappointing that $130 couldn’t hold as support. Now bulls will want to see support in this $126 to $128 area hold up. It marks the backside of prior downtrend resistance, the 200-day moving average and the 38.2% retracement. 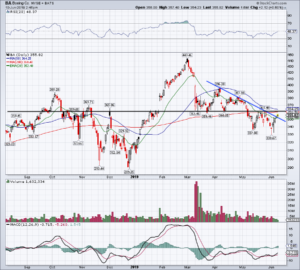 Boeing (NYSE:BA) is finally over downtrend resistance, but it has bigger hurdles on the horizon. For instance, the 200-day and 50-day moving averages loom large at $360.40 and $364.25, respectively.

Not to mention since the 737 MAX issues, the $360 to $362 area has been acting as range support for BA. That creates a very vital level just ahead. If BA can clear this area, $400 is back on the table.

If it acts as resistance, look to see if the 20-day moving average and backside of prior downtrend resistance can act as support. 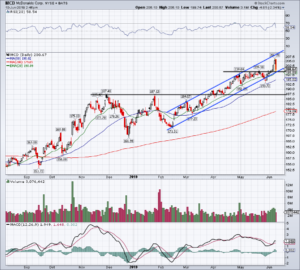 McDonald’s (NYSE:MCD) has dumped lower since Monday’s open, ultimately falling about 2% on the day. The bulls aren’t in trouble yet though.

But before you get too bearish, just look at this stock during the month of May. It was a total beast and while the market was melting down, shares didn’t even test the 50-day. Don’t bet against MCD quite yet. 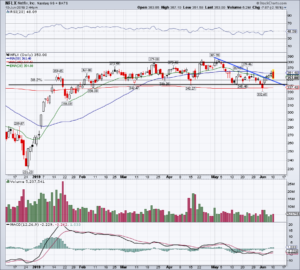 Netflix (NASDAQ:NFLX) is reminiscent of CRM, but without breaking back below prior downtrend resistance (blue line).

Remember, almost all of FANG — Facebook (NASDAQ:FB), Amazon (NASDAQ:AMZN) and Alphabet (NASDAQ:GOOG, NASDAQ:GOOGL) — are under watch for antitrust practices. NFLX seems to be safe of that risk, but that doesn’t mean the other three can’t weigh it down.

Shares are teetering just above the 38.2% retracement near $350, with range support down near $340 and the 200-day at $337.50. Last week, shares temporarily broke below all of these support levels, but quickly reclaimed them with a big rally.

For now, the 50-day is acting as resistance. If shares hold up over downtrend resistance and the 38.2% retracement, see if it can reclaim the 50-day. If they fail as support, see if $337 to $340 holds as support. Below could attract plenty of sellers, especially if FANG weighs it down.

Bret Kenwell is the manager and author of Future Blue Chips and is on Twitter @BretKenwell. As of this writing, Bret Kenwell was long AMZN and GOOGL.