Indices tiptoed higher on Monday, but investors are waiting to hear what the Federal Reserve has to say later this week before making any drastic moves. That’s not stopping some companies from pouncing though, as M&A continues to be a theme over the last few weeks. Let’s let a deal kick off our top stock trades for Tuesday. 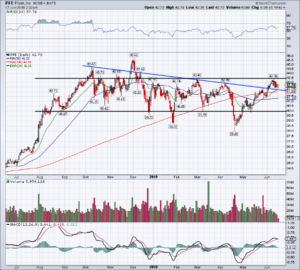 Pfizer (NYSE:PFE) stock is in the news following its $11.4 billion acquisition of Array Biopharma (NASDAQ:ARRY) for $48 per share. The deal sent the latter up by more than 50%, while the former is trying to breakout over resistance as well.

PFE stock has been a better sell than buy up near $43 to $43.50, and a solid buy down near $40. That said, with shares holding up on news of this deal — actually eking out a gain on Monday — and trading north of all three of its major moving averages, it looks okay on the long side.

If it can clear $43.50 though, it WILL be setting up as a breakout. Over that and $45 is in sight, with even higher prices possible should PFE push through. 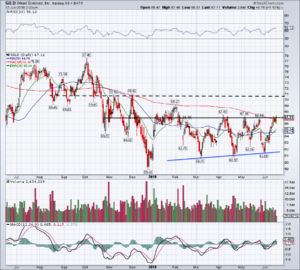 The PFE deal has biotech trading higher on the day and Gilead Sciences (NASDAQ:GILD) is no exception. Shares are up more than 1% on the day, as GILD stock pushes through its 200-day moving average.

The 200-day happens to overlap with $76 range resistance, so perhaps this area knocks the stock down once more. However, if GILD can push through, a run up to $70 is possible. If it is resistance, a decline down to the 50-day is expected, with a possible decline down to uptrend support being possible. 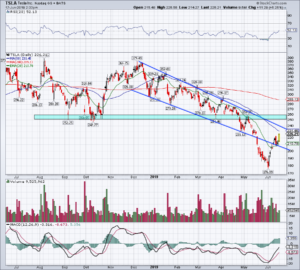 Should Tesla rally this far, it would be a logical place to book profits for traders. Above it and former range support between $250 to $260 comes into play. In May that area acted as resistance for TSLA.

On a pullback — either from current levels or after tagging resistance — see that channel support (blue line) holds. Ideally though, the 20-day will act as support for Tesla. 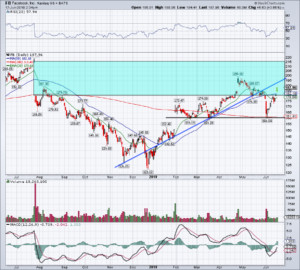 The big blue box on the Facebook (NASDAQ:FB) chart above represents the gap that was created from the company’s disappointing quarterly results 11 months ago.

Shares have pushed into this gap twice, in August 2018 and Q2 2019. Neither time has the stock been able to “fill” the gap all the way back up.

With FB stock now jumping higher though, is the third time a charm? Maybe. Shares have climbed aggressive off the $160 lows and 200-day moving average, up almost $30 per share in just a few weeks. FB previously topped out near $196 and needs to push through this mark, as well as prior uptrend support (blue line) to fill the gap even more. 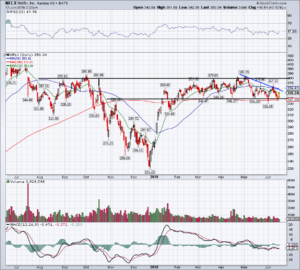 Netflix (NASDAQ:NFLX) stock has been highly responsive to this $340 to $342 level. Buyers gobble it up each time NFLX dips in this area of range support.

That makes it a simple setup, and simple is what we like when it comes to trading. Below the 200-day and traders can cut their losses when dip-buying into this area. Now up a quick 10 points, let’s see how NFLX handles the 50-day moving average. Above it could send Netflix to range resistance up near $380.