The broader market continued lower on Monday, despite falling for four straight weeks at this point. However, large cap tech was at the center of investors’ attention on Monday, with government investigations into whether there are antitrust issues among some of the U.S.’s largest tech companies. Let’s look at some top stock trades for Tuesday. 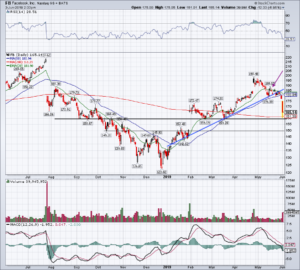 Facebook bounced off its session lows and still fell about 7.5%. Ouch. For now, it’s holding its 200-day moving average, which is more than many stocks can stay. Still, it doesn’t look all that healthy.

Learn how to spot short-term clues in some of these charts. For instance, FB stock lost its 20-day moving average and couldn’t reclaim it as support (purple arrow). You’ll see the same on the next chart. Then FB lost its 50-day moving averages and headed lower.

It’s not a guaranteed setup of course — nothing is — but it can give clues to traders on when to lighten up their position. These antitrust concerns could persist and weigh on Facebook going forward. So watch near Monday’s lows. Just below it is the 200-day moving average, gap-up support and the 61.8% retracement for the 52-week range. 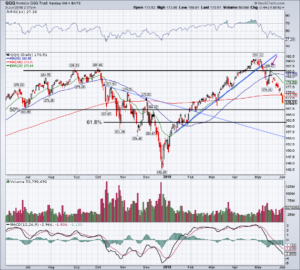 The moving-average breakdown is also apparent on the PowerShares QQQ ETF (NASDAQ:QQQ). Given the selling pressure we’re seeing in FANG, the QQQ’s 2.4% decline on Monday is no surprise.

Will we go down 15%? How about 20%? At this point, I don’t think we revisit the December lows, but I could see an accelerated selloff taking place to get some panic into the market. That seems to be the one thing we’ve been missing: panic. Capitulation is often needed for bottoms. That is, unless we start to get some trade-war improvements. 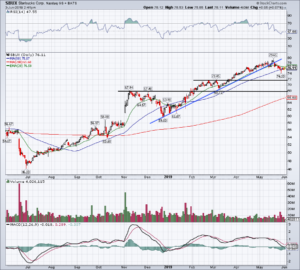 Starbucks (NASDAQ:SBUX) has been a name showing relative strength through most of this selloff. But in mid-May, we started to see some weakness develop.

Keep in mind just what a stud this name has been. A year ago, it was changing hands near $46 and a few weeks ago it was at $80. Just look how it did in Q4. Yeah, this thing has been a total beast.

However, we saw it lose its 50-day last week, albeit only for a day. Still, the 20-day has started to weigh on SBUX stock, uptrend support (blue line) is gone and we could see a similar setup to the QQQ. That is, where the 20-day turns to resistance and the 50-day eventually gives way.

That’s very possible, and I could see SBUX down at $72 if we get some selling pressure. Over the 20-day could send it back to $78+, but bulls may not want to be too aggressive in this environment. Watch the 50-day and should it break, keep an eye on last week’s low. 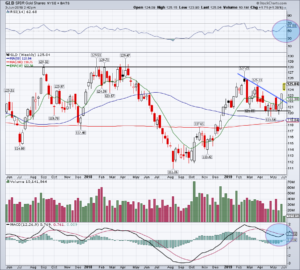 The SPDR Gold ETF (NYSEARCA:GLD) is getting a nice bid — as are Treasuries — as investors search for safety. Last week’s rally snapped GLD out of its downtrend and this week’s spark is adding to the gains.

I want to see the 20-week moving average hold as support. On the upside, see if GLD can test $128. 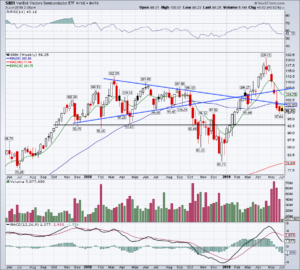 Advanced Micro Devices (NASDAQ:AMD) rallied big on the day (on this news), but saw its gains fizzle out. Nvidia (NASDAQ:NVDA) has been a disgrace, falling about 25% in five weeks. Intel (NASDAQ:INTC) continues to cling to its lows.

In other words, the VanEck Semiconductor ETF (NYSEARCA:SMH) has been under pressure.

The SMH spent much of 2018 in a wedge, which eventually resolved lower. But then semis were able to rally too, with the SMH climbing to $120 about six weeks ago. Since then, it has lost both prior wedge support and resistance, as it hovers under the 50-week and 200-day moving average.

The action is discouraging to say the least. The setup looks bearish and if the SMH loses last week’s low, it will likely test the 61.8% retracement at $96. Below that and $93 is likely the next line in the sand.

Bret Kenwell is the manager and author of Future Blue Chips and is on Twitter @BretKenwell. As of this writing, Bret Kenwell is long AMZN, GOOGL, SBUX and NVDA.