Talk about a “Turnaround Tuesday.” U.S. stocks snapped back and put in an inspiring rally. The question is, can bulls keep up the momentum or will bears use the rally as a chance to reload their short positions? Let’s look at a few top stock trades for Wednesday. 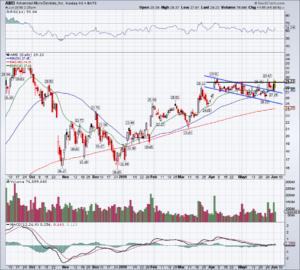 This one didn’t start off all that strong on Tuesday, but boy did Advanced Micro Devices (NASDAQ:AMD) gain steam throughout the session. Shares climbed 6% and pushed through tough resistance at $29.

The move is giving bulls confidence. AMD stock broke out of its downward channel a few trading sessions ago and continued to hold its 20-day and 50-day moving averages as support. That’s pretty impressive in this tape.

Now it’s pushing through resistance. A close over $29 puts its recent high of $29.95 on the table, with a push above that sending AMD into the low-$30s. If $29 acts as resistance while the broad-market volatility picks back up, look to buy AMD on a test of its 50-day. 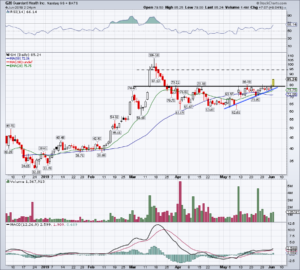 This one is pretty clear, with Guardant Health (NASDAQ:GH) pushing through $79 resistance. If the upside continues, look for a run to $95. I would love a pullback to $80 that holds as support.

That would give investors a low-risk trade entry. Below uptrend support and the 50-day moving average could be on the table. 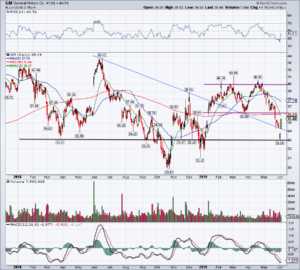 Click to EnlargeGeneral Motors (NYSE:GM) saw a healthy 5% jump on Tuesday. The move jolted the automaker out of oversold territory, as GM does not benefit from an escalating trade war. (Psst: Here are 3 ways to avoid exposure to the trade war).

However, we’re about 50 cents away from possible resistance. Just over $36, GM stock will face the 200-day moving average, as well as the declining 20-day moving average. Further, this area marks short-term range support. Could it act as resistance on a test from the bottom? It’s possible.

What now? I want to see how GM does on a test of $36. Reclaiming this level is good for the bulls, while GM failing and breaking below the 61.8% retracement for the one-year range at $35.17 is bad.

Let’s give GM stock a few more days to tip its hand. 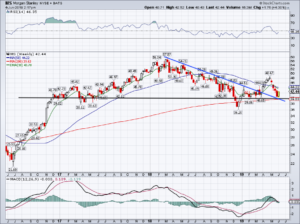 Morgan Stanley (NYSE:MS) has an interesting setup here. Shares are bouncing right above the 200-week moving average and are holding above the backside of prior downtrend resistance (blue line).

On the downside, this stock has to hold $40.

On the upside, I want to see how it does with the 10-week and 50-week moving averages near $44. That’s also about where investors will find the 200-day moving average and 50% retracement for the one-year range. 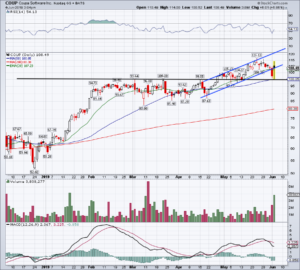 Coupa Software (NASDAQ:COUP) beat on earnings, but the reaction has been mixed. That’s not all that encouraging given Tuesday’s big market rally. Further, bulls may be apprehensive to take a long flyer on Coupa given the market climate we’re in.

That said, It has to hold $100 for bulls to stay long. While we’re $8.50 above that mark, this level serves, essentially, as the two-day low. It’s also now the post-earnings low, as well as the 50-day moving average. Finally, its prior range resistance turned support.

It’d be encouraging for COUP to hold channel support and the 20-day. If it can, perhaps it can take out its $116 high and test channel resistance. Investors can try to buy a dip down to $100. But below and they need to let Coupa reset.

Osisko to carry out innovative gravity survey at Pine Point