U.S. stocks bounced back on Tuesday, with an increasing number of traders talking about choppy market conditions. Without a change in trade-war rhetoric — either good or bad — it’s hard for the market to gain much momentum in either direction. Let’s look at a few top stock trades for Wednesday. 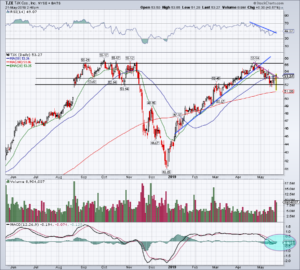 TJX Companies (NASDAQ:TJX) beat on earnings expectations and raised its outlook. Shares are about flat on the day despite its report, although it’s now well off the lows. It doesn’t help that the retail sector is mixed following Tuesday’s earnings releases.

For TJX, it’s a best-in-breed name that’s clinging to its 50-day and 20-day moving average. It’s also holding that gap-up level near $52. So long as that remains the case, bulls can stay long TJX.

Below and it gets more iffy. If that’s the case, see how it handles Tuesday’s low and the 200-day moving average. If it fails as support, sub-$50 could be the way. Should TJX can maintain current levels, see if it can rally to resistance near $55 to $56.

Momentum and the RSI (blue circles) are starting to move in bulls’ favor. 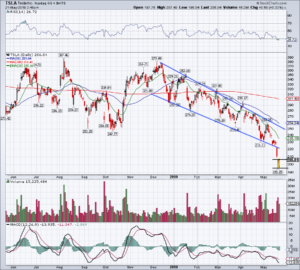 We took a longer-term look at this one last week, but the continued selling pressure in Tesla (NASDAQ:TSLA) is forcing us to take another look. This time, it’s after Morgan Stanley analysts give their new opinion on the stock, which includes a “bear case” price target of $10. (Psst…was Apple (NASDAQ:AAPL) thinking about buying Tesla a few years ago? Reportedly, yes!)

The stock broke below its downward channel last week, as Tesla dove below $200. However, it’s putting together a nice two-day range. I like two-day ranges because it gives both buyers and sellers a level to measure against.

Over the two-day high — currently $207.40 — and investors can look for TSLA to move higher. Upside targets include the gap fill just over $210, Friday’s high at $222.25 and the next gap fill up near $227.50. The middle of those three targets would be a test of prior channel support.

Below the two-day low of $195.25 and we can get a break lower if TSLA stock does not reclaim this mark in the session. 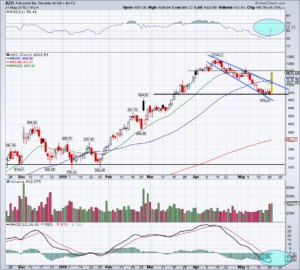 Click to EnlargeAutoZone (NYSE:AZO) beat on earnings and revenue expectations, as shares jumped almost 6% in the session.

The $980 level held as support while AZO is now smashing through the 20-day and 50-day moving averages. The RSI and MACD (blue circles) shows there is plenty of room for bulls to run if they can maintain momentum. 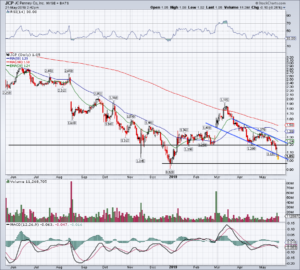 J.C. Penney (NYSE:JCP) is down about 8% after reporting earnings and flirting with a decline below $1.

Shares are also on the cusp of falling below downtrend support. If it does, look for a retest of the December lows. If channel support holds, a rebound up to $1.20 is possible. I am not a big supporter of trading JCP stock, as it’s often too volatile and there are almost always better candidates in the market. 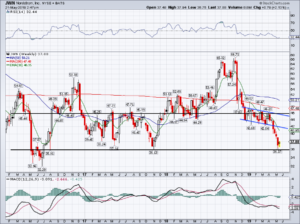 Nordstrom (NYSE:JWN) will report earnings on Tuesday after the close, while investors continue to digest retail earnings.

$36 has been a decent level of support and JWN has come down big ahead of the print. Its legacy business may struggle, but perhaps Rack can save the overall results. Still, retail isn’t getting much love and it’s hard to be super bullish into the print.

Below $36 could call upon the $32 to $34 range, while a rally could send JWN up to the $40 to $41 level. That’s prior channel support and the 20-day moving average. See if this area is reclaimed or if it acts as resistance.