U.S. stocks were slightly lower Tuesday as investors begin to digest corporate earnings results. Over the coming weeks, we’ll be hit with hundreds of reports, with banks mostly leading the charge on Tuesday. Let’s get a look at a few top stock trades going into mid-week. 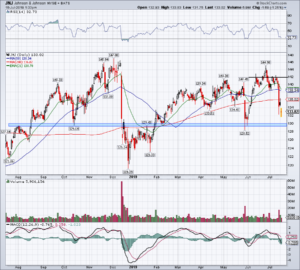 Shares of Johnson & Johnson (NYSE:JNJ) are down just over 1% despite beating on earnings estimates. The price action over the last few days has been telling and leaves a roadmap for investors.

That’s a perfect little map for short-term investors. Above Tuesday’s high and we can get a retest of the 200-day. Over the 200-day and perhaps J&J can work its way up to the 50-day. On a drop below Tuesday’s post-earnings low, we could see a decline down to the key support area between $129 and $130. 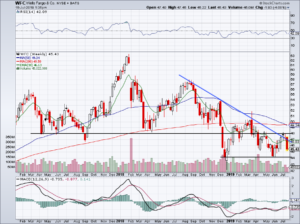 We’re seeing some decent reaction to bank earnings, with JPMorgan (NYSE:JPM) and Goldman Sachs (NYSE:GS) advancing on the day. However, Wells Fargo (NYSE:WFC) isn’t one of them, falling more than 2.5%.

The stock has been in a downtrend (blue line) for about a year now, while $48 is acting as resistance. $45 has buoyed the name over the last few months, but should it fail, the May/June lows at $44 are on deck. Below that and WFC is in trouble.

North of $45.63 and perhaps WFC can gain some bullish momentum. 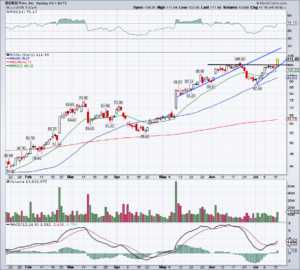 Roku (NASDAQ:ROKU) surged more than 8% at one point, as the stock went on to make new highs above $113.

Earlier this month, we flagged this one for InvestorPlace readers and boy is it paying off. Shares bounced cleanly off the 50-day and quickly reclaimed the 20-day. As long as it holds $105 now, it looks good on the long side.

It sounds crazy, but I wouldn’t be surprised to see $120 to $125 on this one ahead of earnings — assuming the market continues to trade well too. 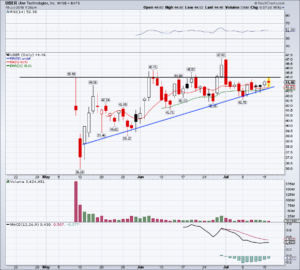 Uber (NYSE:UBER) looked like it was ready to go earlier today, rallying right up to $45 before falling back down.

This stock continues to put in higher low after higher low and is maintaining above its 8-day and 21-day moving averages.

It’s either going to create an epic breakdown or breakout at this point. The key point to watch is the $45 IPO price. Either shares break over this point, running to $47 and potentially to $50+ if it can gain momentum, or it’s going to stumble hard. Watch $45 like a hawk (but remember, everyone else is too). 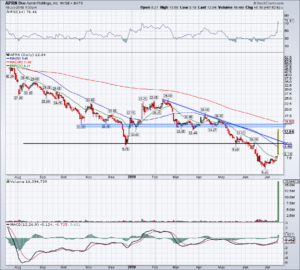 Blue Apron (NYSE:APRN) has had one of the worst post-IPO runs I’ve ever seen. Did you know, APRN hasn’t ever closed above its IPO price?

Ironically, Beyond Meat (NYSE:BYND) has had one of the best IPOs in recent memory, so it only makes sense that the two partner. The move is sending shares of APRN higher by more than 50% and shares eclipsed $13.50 at one point. It was a very strong move and it makes sense why.

Blue Apron’s IPO price was actually $10, but on the chart it will show up at $150 because the company already had to do a reverse stock split. In any regard, the stock’s move above $10 is notable. In doing so, it reclaimed the 50-day moving average and, at least for now, is breaking out of its downtrend.

Bret Kenwell is the manager and author of Future Blue Chips and is on Twitter @BretKenwell. As of this writing, Bret Kenwell was long ROKU.