Stocks opened lower on the day, but by the afternoon were able to turn higher. M&A remains a constant theme in the market, although investors are getting more focused on the Federal Reserve and whether it will cut rates or hold steady. Let’s look at a few top stock trades going into Wednesday. 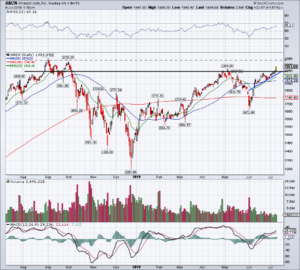 Click to Enlarge Not all that long ago in InvestorPlace’s Nasdaq Today column, we wrote that the Nasdaq would have trouble getting back to all-time highs if FAANG didn’t start participating.

Well, Amazon (NASDAQ:AMZN) is trying to do its part, hitting its highest levels since Q4 2018. The stock’s post-earnings rally was halted in its tracks a few months ago when the stock market took a dive on renewed trade-war fears.

Over the last month though, AMZN has been trending higher (blue line) while bumping into resistance near $1,950. On Wednesday, it burst through the latter. 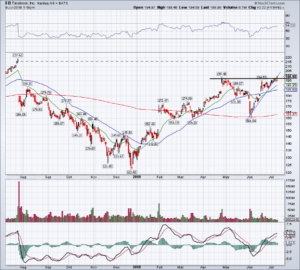 Click to Enlarge  Another FAANG component is on the move Wednesday, with Facebook (NASDAQ:FB) jumping higher. Pushing through its April and May highs, the stock is hitting its highest levels in a year.

I want to see a further push above $200, increasing investors’ confidence that a gap-fill up toward $215 can take place. Let’s also see if this $197.50 area can act as support going forward.

If FB stock breaks down, I want to see either the 20-day or the 50-day moving average act as support. 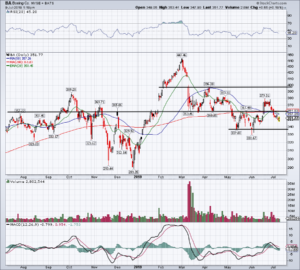 Click to Enlarge  I will give Boeing (NYSE:BA) stock some credit, as shares handle bad news relatively well. Shares are up Tuesday despite a year-over-year decline in Q2 and 1H deliveries, and only fell modestly on Monday despite one customer canceling an order for up to 50 jets.

Most importantly, though, it’s still below the key $360 level, which buoyed BA stock for almost two months following the 737 MAX incident. It’s also below all of its major moving averages. 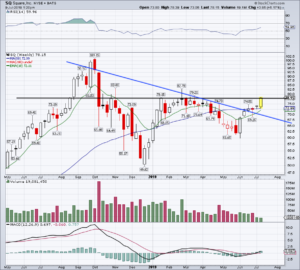 Click to Enlarge Square (NYSE:SQ) stock is erupting on Tuesday, up more than 6% on the day. The action is promising, as SQ jumps off its 50-week moving average and tests a key level of resistance near $78.

Over this mark and a run to $82 or higher is in the cards. Eventually, we want to see $78 turn to support. If $78 holds as resistance, see that the 10-week holds as support. 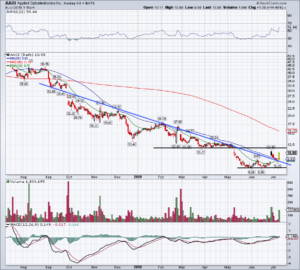 Click to Enlarge Applied Optoelectronics (NASDAQ:AAOI) caught a huge lift on Tuesday, up 14%, thanks to Cisco Systems (NASDAQ:CSCO) agreeing to acquire Acacia Communications (NASDAQ:ACIA) for $2.6 billion. It sent a bid through the whole group, as investors add M&A to the industry’s list of catalysts.

The move is igniting AAOI stock over the 50-day moving average, while keeping it north of the 20-day moving average and prior downtrend resistance. If it can continue higher, see how it handles the high from a few weeks ago at $11.40. Above that and the $11.80 to $12 area (black line) will be interesting.

This zone was strong support before giving way in May.