I can’t believe how badly the media is downplaying the 5G revolution. They’re so focused on the U.S.-China trade war that they’re completely missing the epic battle over 5G.

You may have heard that the big wireless carriers — Verizon (NYSE:VZ), AT&T (NYSE:T),T-Mobile (NASDAQ:TMUS) and Sprint (NYSE:S) — are racing to roll out 5G networks.

But this story is MUCH bigger than that. 5G will literally change the world forever (as we’ll see).

And you better believe Wall Street is all over this. While the  mainstream media may be mostly ignoring 5G, the “smart money” sure isn’t.

So…why are investors so fired up about 5G stocks? And why should you be, too? Let me explain why.

5G: What You Need to Know

I remember very well, back in the early days of the internet, when folks often referred to it as the “information superhighway.”

So let’s picture it that way. You’re heading home after a long day of work. Your commute shouldn’t take very long, but there is only a one-lane highway, and it’s the only way home. The traffic is bumper-to-bumper, and what should be a quick 20-minute drive takes hours instead.

Over time, a second lane is built. There’s still plenty of traffic, but the congestion is less.

Eventually, a third lane is built, and then a fourth. Those of you who commute this way find that your ride home is getting shorter and shorter.

Then, one day, 10 more lanes suddenly open up. Not only is that awful congestion gone, but cars are zipping along. Now you’re home almost instantly! With the commute done, you’ve got the rest of the day to yourself.

That’s the kind of difference we’ll see with 5G.

5G — the fifth generation of wireless technology — will introduce blazing speeds…and be more readily available. I’m expecting a massive upgrade to smartphones and other mobile devices.

What’s so exciting is that it has low latency: Instead of two minutes or more to load a webpage, like we dealt with in the 1990s, now it’ll take you six seconds to download a whole movie with 5G!

With so many web services going to the cloud, that’s key. You’ll now be able to interact with them in real-time.

Phones Getting Smarter By the Day

Since 5G tends to be associated with the big wireless carriers, like Verizon’s “5G Revolution” and AT&T’s “5G Evolution,” let’s start there.

1G wireless devices were those big, clunky phones from the 1980s. Since they used analog technology, they only supported voice calls. They also had poor battery life and security and were prone to dropped calls. And most people could barely fit them in their car’s glove compartment, let alone their pants pocket. 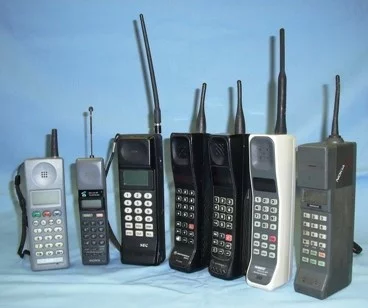 Wireless technology certainly has come a long way since then, as the graphic below illustrates. 2G brought us SMS text messaging. With 3G we had texting and internet access, while 4G tacked on video — and 5G opens the door to Ultra HD, 3D video and smart home apps. The hardware is also much, much sleeker. 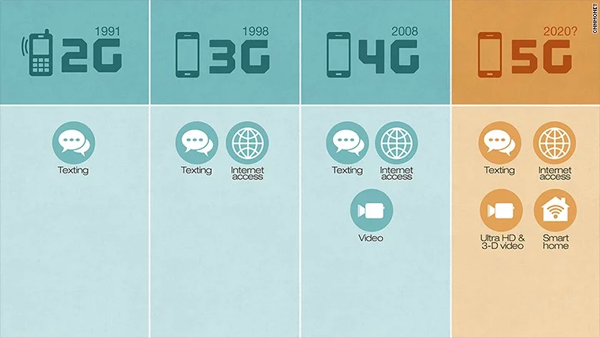 The first five phones are in the works, starting with the Samsung Galaxy S10 5G and the LG V50 ThinQ, and with the Huawei Mate X, the Xiaomi Mi Mix3 5G and the ZTE Axon 10Pro soon to come.

These will offer buffer-free video, faster downloads, and greater bandwidth to handle more data. So much so that they’ll be able to capture an entire 3D space!

According to CCS Insight, sales of 5G smartphones should hit 100 million units in 2021.

Grab Your Slice of the Pie

You can see why Verizon, AT&T, T-Mobile and Sprint are all vying to place first in the race to 5G. In fact, all of them released some form of 5G this year. Verizon is in the lead: It’s already rolled out mobile 5G in Chicago and Minneapolis in April, with 20 other metro areas to come later in 2019.

So, you might be expecting me to recommend VZ, or one of its peers, as my 5G play. Not so.

5G has many more applications than smartphones — we’ll look at some more tomorrow — and one of them is “the mother of all technologies,” a breakthrough that will change our world…once we’ve got those “extra lanes” for it to run on.

The 5G global infrastructure market is expected to grow from $2.55 billion in 2020 to over $42 billion by 2025. That’s a 75% increase — far larger than many other industries could ever imagine in just five years.

The bottom line: 5G is a very, very big deal. Essentially, whoever controls 5G is anticipated to control the internet several years from now. So, the long-term investment potential is huge.

However, instead of one company that needs 5G technology, I think more money can be made in the one that’s involved in the creation of 5G. That will be the stock that lets us cash in on that whole meteoric rise of the 5G market.

In Growth Investor, we own a little-known electronics company — that is helping some high-profile clients move to 5G. Its customers include the top 25 telecoms…the top 25 tech companies…and 78 of the Fortune 100 companies.

Go here to watch my presentation on the huge technological shift going on now. At the end, you’ll get the chance to hear my #1 Investment for the Coming 5G Revolution — for free.

How Much Of A Threat Are Zillow & The New iBuyers?