On Thursday we had some geopolitical news that sent oil prices flying while U.S. stocks pushed higher. The bears still can’t grab control of the football, despite the bulls having run so far, so fast. Let’s look at a few top stock trades as we enter Friday. 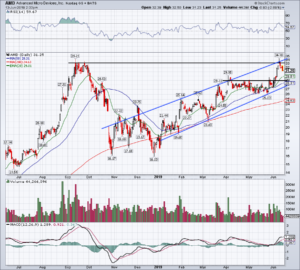 Shares of Advanced Micro Devices (NASDAQ:AMD) made new highs earlier this week, but have since retreated. The stock is under pressure following an analyst warning on valuation and after reports surfaced of new GPUs from Nvidia (NASDAQ:NVDA).

That’s got shares down below $32, as a potential pullback looms. InvestorPlace readers nailed the breakout in AMD over $29. If we could get a “return to the scene of the crime,” that would be a great potential buying opportunity.

$30 may buoy the name first, though. That’s where the April highs rest with the 20-day moving average trending higher toward that mark now. There are various levels between $27.50 and $30 that should support AMD stock and I consider this a buy-the-dips candidate until proven otherwise. 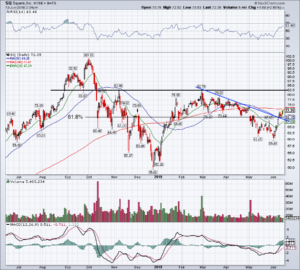 Square (NYSE:SQ) did a great job pushing over downtrend resistance (blue line), hurdling its 50-day moving average in the process.

So long as SQ stock maintains above $69 it looks good on the long side in the short term. That keeps the stock over the 61.8% one-year retracement and the 50-day moving average. Over the 200-day moving average — which Square is currently contending with — could spark a breakout. 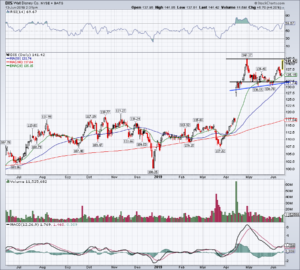 Disney (NYSE:DIS) continues to move really well. Notice how the House of Mouse was almost immune to the May selloff. Not that it didn’t come under pressure and dip below its 20-day moving average — it did — but that’s mostly as shares went from $107 to $142 in just a month’s time.

After consolidating those gains and reclaiming the 20-day, shares look ready to move again. They are knocking on the door of new highs and it looks like DIS wants it. A breakout over $142.50 could trigger another wave of buying, perhaps pushing it to $150. 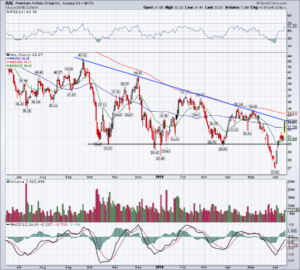 American Airlines (NYSE:AAL) is rebounding from a brutal breakdown in late May, with shares crashing through long-time $30 support.

However, it’s since reclaimed that level, as well as the 20-day and 50-day moving averages. Now it contends with downtrend resistance (blue line), while the 200-day rests about $1 above current levels. Both have been strong levels of resistance.

Should they continue acting as resistance, see if investors get another buying opportunity back at $30. Otherwise, a breakout opportunity may be in the cards. 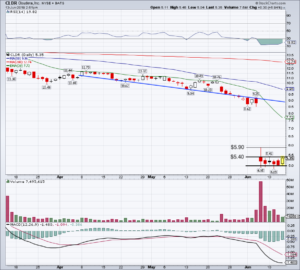 What a disaster Cloudera (NYSE:CLDR) has been. Shares have been cut in half in less than a month and appear lost for direction. There are better setups out there, but traders seem to have their eye on this one.

Over $5.40 to $5.50 could send CLDR back to $5.90. Clearing this mark is what’s necessary to start filling the gap, while the descending 20-day moving average will likely act as resistance. Below $5 is a big concern with CLDR.

I’d rather play a different stock… 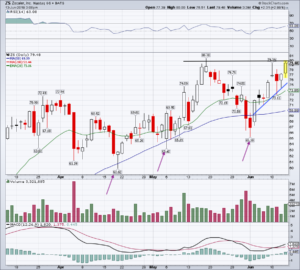 This name has been knocking on the $80 door all day Thursday and wants to bust through like nobody’s business. Can it? Maybe this one fails to push through or causes a false breakout, but I like it more than CLDR. Watch for a push through $80 on ZS.

This one paid out nicely last time we were watching it.