7 Marijuana Stocks to Avoid That Are Bleeding Cash


You may find it surprising, but the Post Office, the Atlanta Hawks and these seven marijuana stocks all have something in common. At first glance, you may think they have nothing to do with each other. After all, the Post Office is run by the government, the Atlanta Hawks are a professional basketball team and cannabis companies were established to profit off of the booming legal cannabis industry.

But unfortunately, these very different organizations do in fact have something in common. And it just so happens that it is a very important thing. They are all losing money! None of them have made a profit in years!

But let’s talk about the cannabis companies In the stock market, the idea is to invest in companies that are, or will be, profitable. This profitability will, in turn, lead to the share price appreciating. Financial theory, history and common sense all tell us that if a company doesn’t make money it will eventually go out of business. Investors will see declining share prices and losses.

Looking at the Cannabis Companies: You are probably familiar with the following companies if you trade or invest in the cannabis markets. They may have cool products and be in a cool industry, but if you are considering investing in them, it is important to understand that they are losing money. You may ask yourself, “how have they been able to lose money for a sustained period of time?”

The answer is that they borrow money or issue stock and use these proceeds to cover their expenses. But eventually, the ability to do so will stop if they are never able to turn a profit.

I am not saying that these companies will never earn money and that you can’t profit by investing in their stocks. Some of them may eventually become great investments. My intent here is to express my belief that before making an investment in a company, one should consider if it is actually making money and what the future prospects of profitability are. In the long run, these dynamics will ultimately have a significant effect on the share price. 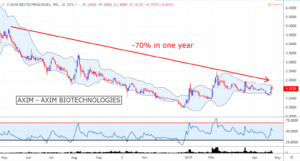 Click to Enlarge Axim Biotechnologies (OTCMKTS:AXIM) makes a really cool product. It is a biotechnology company based in New York City. The company makes chewing gum that is infused with medicinal cannabis. This is used to treat pain, anxiety and other conditions. It can even be used to treat opioid addiction, which we all know is a terrible epidemic. I am not really sure how they do it because I’m a stock market guy, not a scientist, but I think it sounds like an awesome idea.

Not surprisingly, the stock has not acted well. It is currently trading around the $1.50 level. As you can see on the chart, over the past year it has lost about 70% of its value. Maybe someday one of the company’s product will be a huge success and it will become profitable, but over the past few years, it has certainly been a disappointment to shareholders. 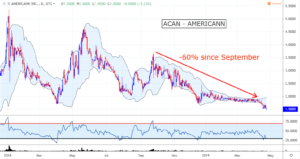 Click to Enlarge Americann, Inc. (OTCMKTS:ACAN) is next on the list. Like many other cannabis companies, they are based in Denver. This company develops medical cannabis cultivation and processing properties. In other words, they build greenhouses. The greenhouses they build aren’t like the kind my grandfather had in his garden. These are big-time greenhouses that are used for largescale industrial growing. They have built and developed over one million square feet of growing area.

Apparently, the Cannabis greenhouse business isn’t very profitable — at least in the way that Americann does it. Last year they lost $4.4 million which equates to a loss of 22 cents per share. This is more than they lost in the prior few years. In 2017 the loss was $2.7 million, in 2016 it was $2.2 million, and in 2015 the loss was $1.7 million. Maybe one day the company will be profitable but, as for now, they seem to be headed in the wrong direction. 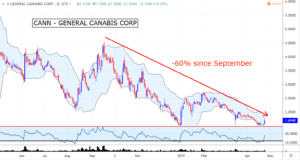 Click to Enlarge General Cannabis Corp. (OTCMKTS:CANN)  is a holding company that is based in Denver. They have four different segments — security, operations, consumer goods and investments.

The security segment provides different types of services to cannabis growers and retails stores. These services include video surveillance, transporting cash and providing security professionals. Consulting services to the cannabis industry that include obtaining licenses, compliance, logistics, retail operations and facility services are offered by the operations segment. The consumer goods segment includes developing relationships with apparel retailers and distributors. The investments segment provides loans and financing to companies within the cannabis industry.

General cannabis is clearly an organization that is involved in many things. Maybe it is involved in too many things. Have you ever heard the expression “jack of all trades and master of none?” I think that could apply here. This company hasn’t earned any money in years. Last year it lost almost $17 million, or 49 cents per share. The prior year’s losses were less than half of that. In 2017, the loss was just over $8 million. In 2016, General cannabis lost just over $10 million and, in 2015, the loss was almost $9 million. If you’re keeping track, this company has lost a total of $44 million in the past four years. 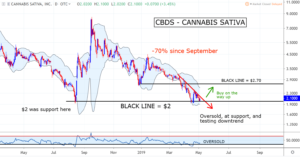 Click to Enlarge Cannabis Sativa, Inc. (OTCMKTS:CBDS) is next up on the list of losers. After looking at the company website for a while, I couldn’t even figure out just what they actually do. I think it has something to do with providing services to cannabis dispensaries. Here is the description from MarketWatch:

“Cannabis Sativa, Inc. engages in the research, development, acquisition and licensing of specialized natural cannabis related products, including cannabis formulas, edibles, topicals, strains, recipes and delivery systems. The company was founded on November 5, 2005 and is headquartered in Mesquite, NV.”

This company seems very mysterious to me. According to MarketWatch, there is only one employee despite having revenues that were over $500 million. One of the things that I noticed when I was looking at the financials is that the Quick Ratio is only 0.25 while the average Quick Ratio for the industry is 2.67.

The Quick Ratio is the company’s cash and short-term securities divided by the current liabilities. Current typically means one year or less. In other words, Cannabis Sativa only has 25 cents for each dollar of debt that they have, while the industry average is to have $2.61 for each $1 of debt. With a ratio like that, it isn’t surprising that they are losing money. 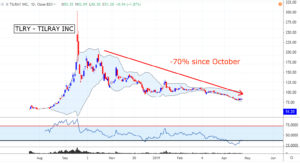 Click to Enlarge Tilray Inc. (NASDAQ:TLRY) hasn’t been a publicly traded company for that long. The initial public offering was last summer. This company has the distinction of being the first publicly traded cannabis company to list on the Nasdaq. Their business model is very understandable. They engage in research, cultivation, production, and distribution of cannabis and cannabinoids. Products include dried cannabis and cannabis extracts. In other words, they grow and sell weed.

Tilray went public last year, but they have disclosed financial information going back further. If you think about it, it is kind of amazing that a company that loses money could go public. This was a common occurrence back in the dot-com era. The company has a market capitalization of around $5 billion despite the fact that they lost $67 million last year. In 2017, they lost about $8 million and had a similar size loss in 2016. 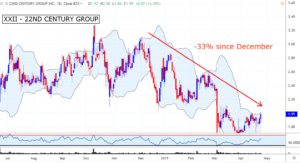 Click to Enlarge 22nd Century Group, Inc. (OTCMKTS:XXII) is based in Clarence, New York. It is a biotech company. They research and develop technologies that will allow the increase or decrease of the levels of nicotine and nicotinic alkaloids in tobacco plants and the levels of cannabinoids in cannabis plants.  My guess is that there will be greater demand for increasing than decreasing. This is done through genetic engineering and plant breeding. Sounds like pretty neat stuff.

Maybe this company will turn around one day and become successful, but the current shareholders must be disappointed. The valuation has fallen by about one-third since December as the price per share has fallen from $3 to $2 while the broader equity markets have been booming since then. 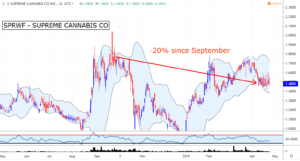 Click to Enlarge The Supreme Cannabis Co, Inc. (OTCMKTS:SPRWF) is last on the list. Obviously, there are many other cannabis companies that are losing money out there, but today I just wanted to focus on these seven because they seem to be popular recently. Supreme has a similar business model as Tilray. The company grows and sells cannabis, although the product may be a little different because they say it is ‘“sun-grown.” I suppose this is in contrast to being grown with artificial light. Supreme does this through their wholly owned subsidiary 7ACRES.