7 Penny Stocks That Are NOT Cheap Stocks

The allure of investing in penny stocks can be quite strong. Every investor has dreams of putting a few thousand dollars in a penny stock and becoming a millionaire when it goes to $100 per share.

But you need to be careful. Things aren’t always as they seem. Just because it is a penny stock, it isn’t necessarily cheap. Companies are typically valued by taking the assets and subtracting the liabilities. Assets consist of things such as cash, property, and inventories. Liabilities consist of things such as debt and loans, salaries, and taxes. These values are easily found on the company’s balance sheet.

You can also look at the Total Debt to Total Assets ratio. If it is greater than 1, consider it a major red flag. This means liabilities exceed assets.

The following 7 marijuana stocks all have terrible valuations. In other words, their liabilities are greater than their assets. If you are considering investing in penny stocks, this is something that I believe you should take a look at.  Does it make sense to invest your money in companies that are essentially bankrupt?

I’m not saying that you can’t make money investing in them. But you don’t need to be Warren Buffet to understand that companies that have value and make money will outperform companies with negative valuations that lose money. 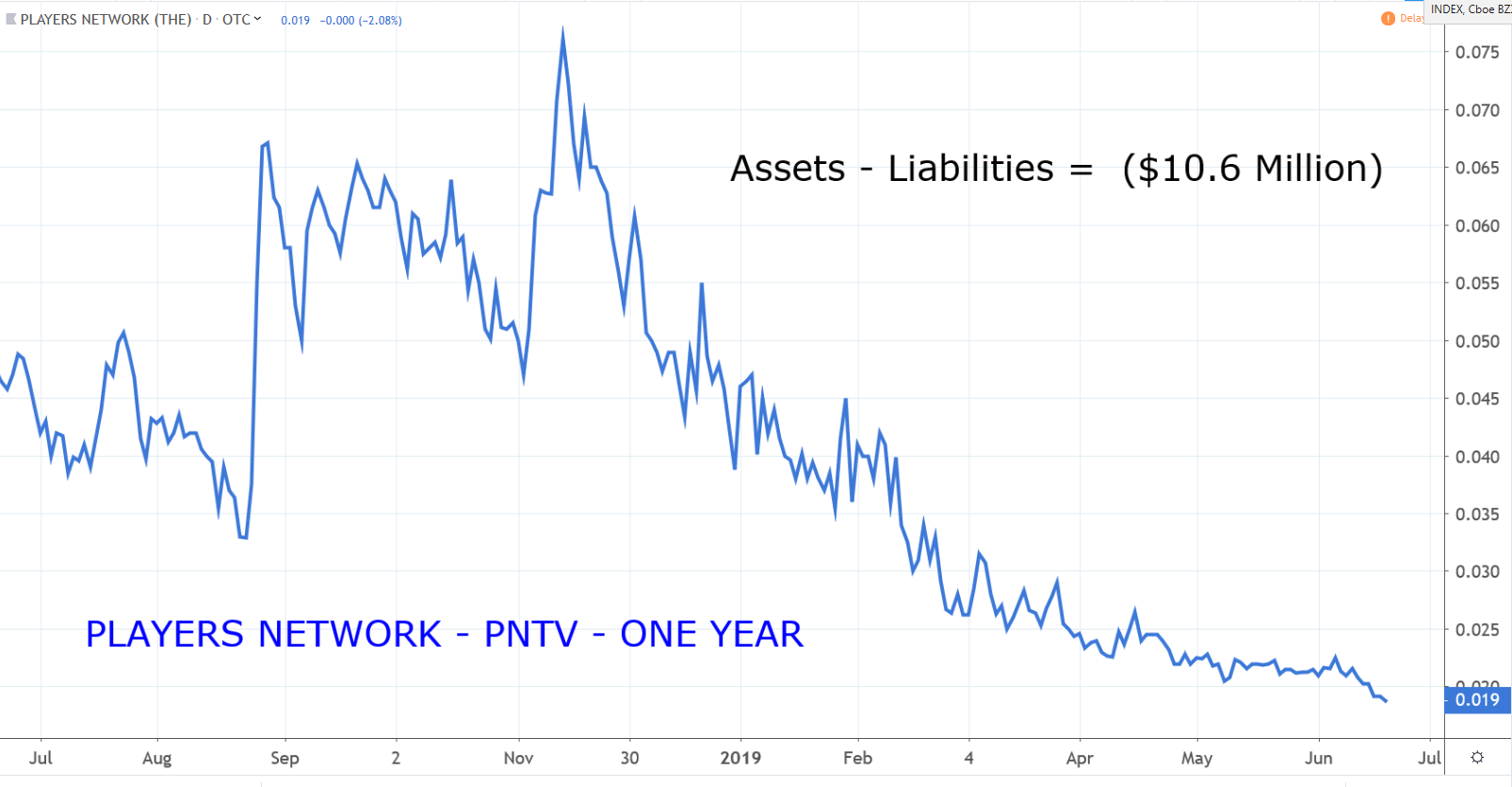 Players Network (OTCMKTS:PNTV) is involved in the creation of digital networks and broadband distribution. It also grows and processes medical marijuana. And no, I’m not exactly sure how these two seemingly very different businesses are related.

Maybe this strange mix is why this company has been such a loser. Last year it lost over $1 million. According to the balance sheet, the total assets of the company are around $1.2 million and the total liabilities are $11.5 million. That means this company has value of -$10.6 million. Despite this, it has a market capitalization of $17 million. 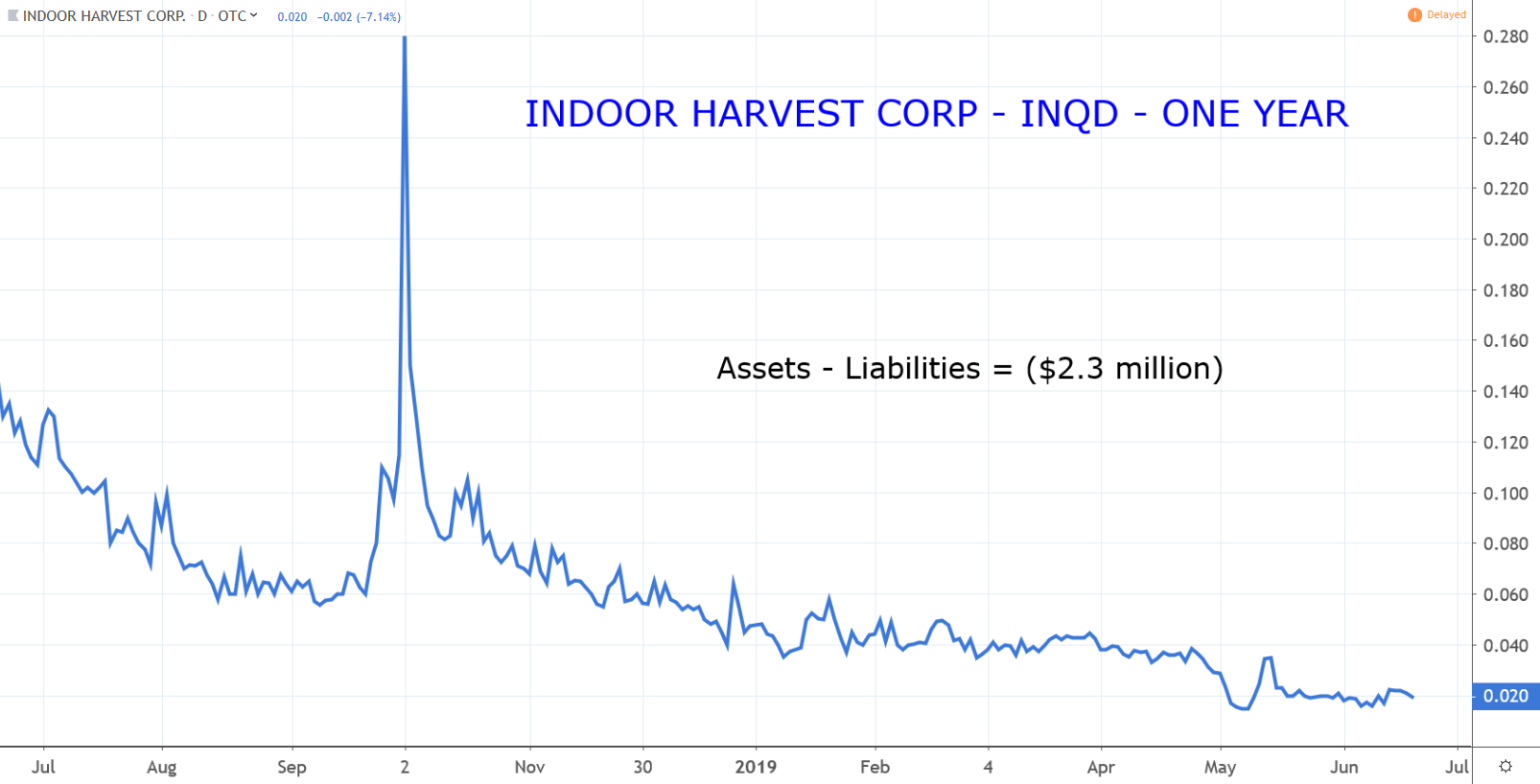 This seems like a great industry to be in, but unfortunately things aren’t working out so well for INQD. The company’s market cap is less than $1 million. This isn’t surprising considering that that it only has $200,000 in assets and $2.6 million of liabilities giving it a total value of negative $2.3 million. 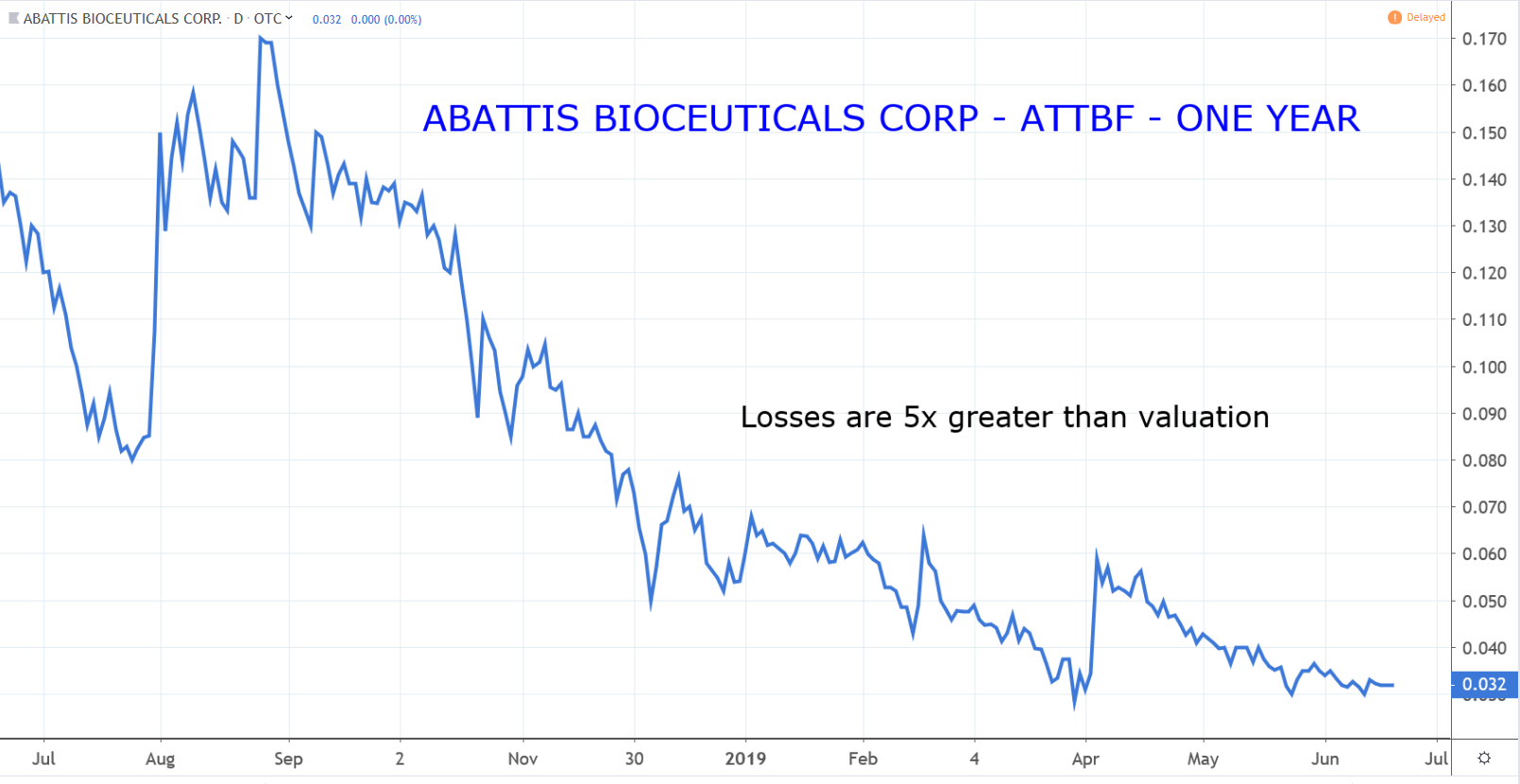 Despite how cool this business description sounds, this company losses a lot of money.

Like most of these little penny stock companies, information on ATTBF was hard to find but I think they have lost more than $20 million between 2014 and 2017, an average of $5 million annually. The most recent reported assets were $1.2 million with liabilities of $440,000. This gives it a valuation of about $700,000. It is typically not a good thing when a company post losses that are more than 5 times its valuation. 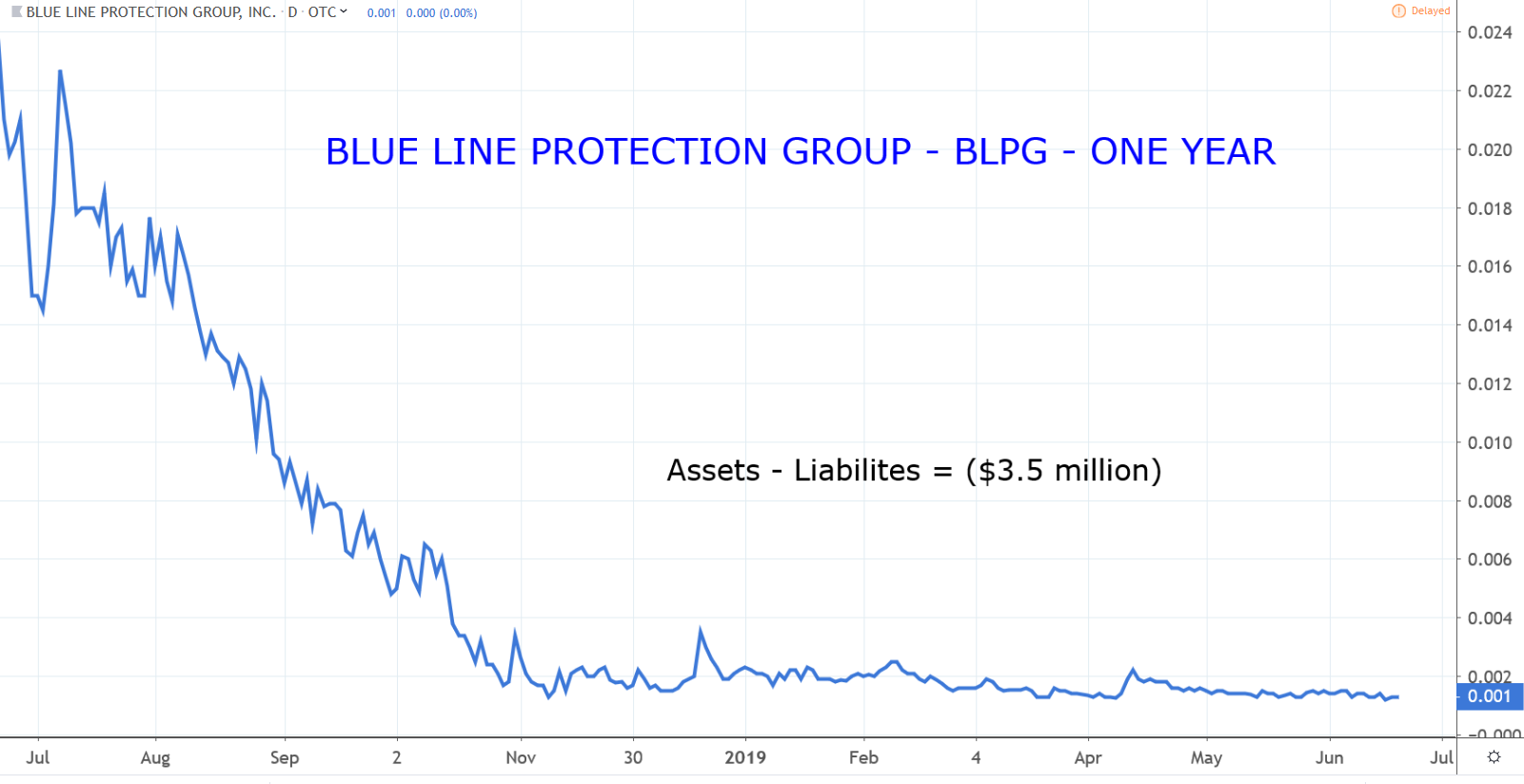 Blue Line Protection Group (OTCMKTS:BLPG) provides protection, transportation, banking and training services for the legal cannabis industry. This is a fancy way of saying that they are in the security business.

Unfortunately for Blue Line they may not need protection for themselves because they probably don’t have anything worth stealing. BLPG lost $1.25 million last year. In the prior four years, it lost a total of about $9 million. 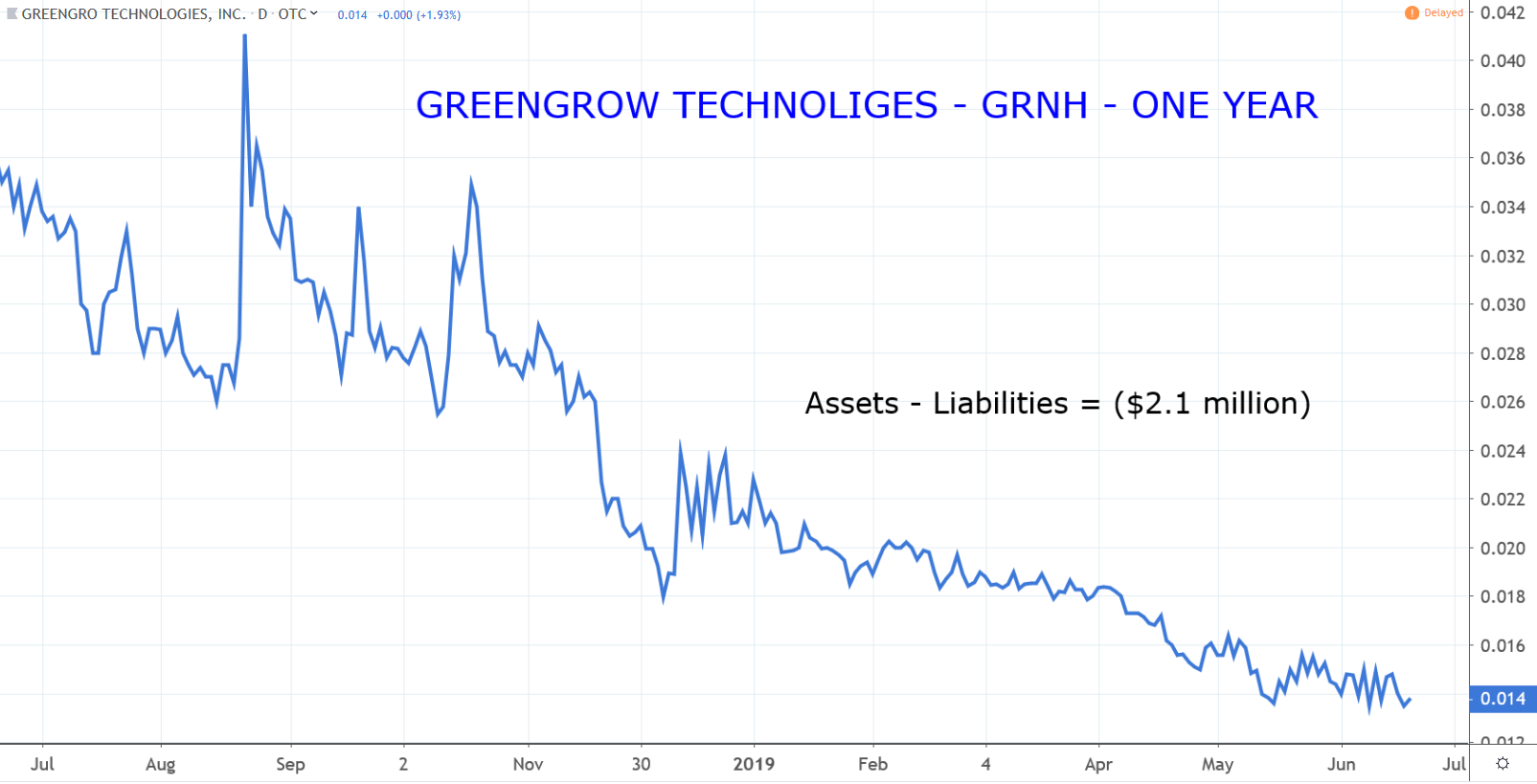 GreenGro Technologies (OTCMKTS:GRNH) is involved in the sale of greenhouse systems. The company also sells hydroponic supplies at its retail store in Anaheim, California. They sell pretty much anything you could need if you want to build a greenhouse or an indoor growing system.

Considering the rapid growth of the cannabis markets, it is reasonable to believe that this would be a great business to be in. Unfortunately for GreenGro, this has not been the case. Last year it lost $3.7 million. In 2017 the loss was $8 million. With assets of $4.6 million and liabilities of $6.6 million, the value is negative $2 million. 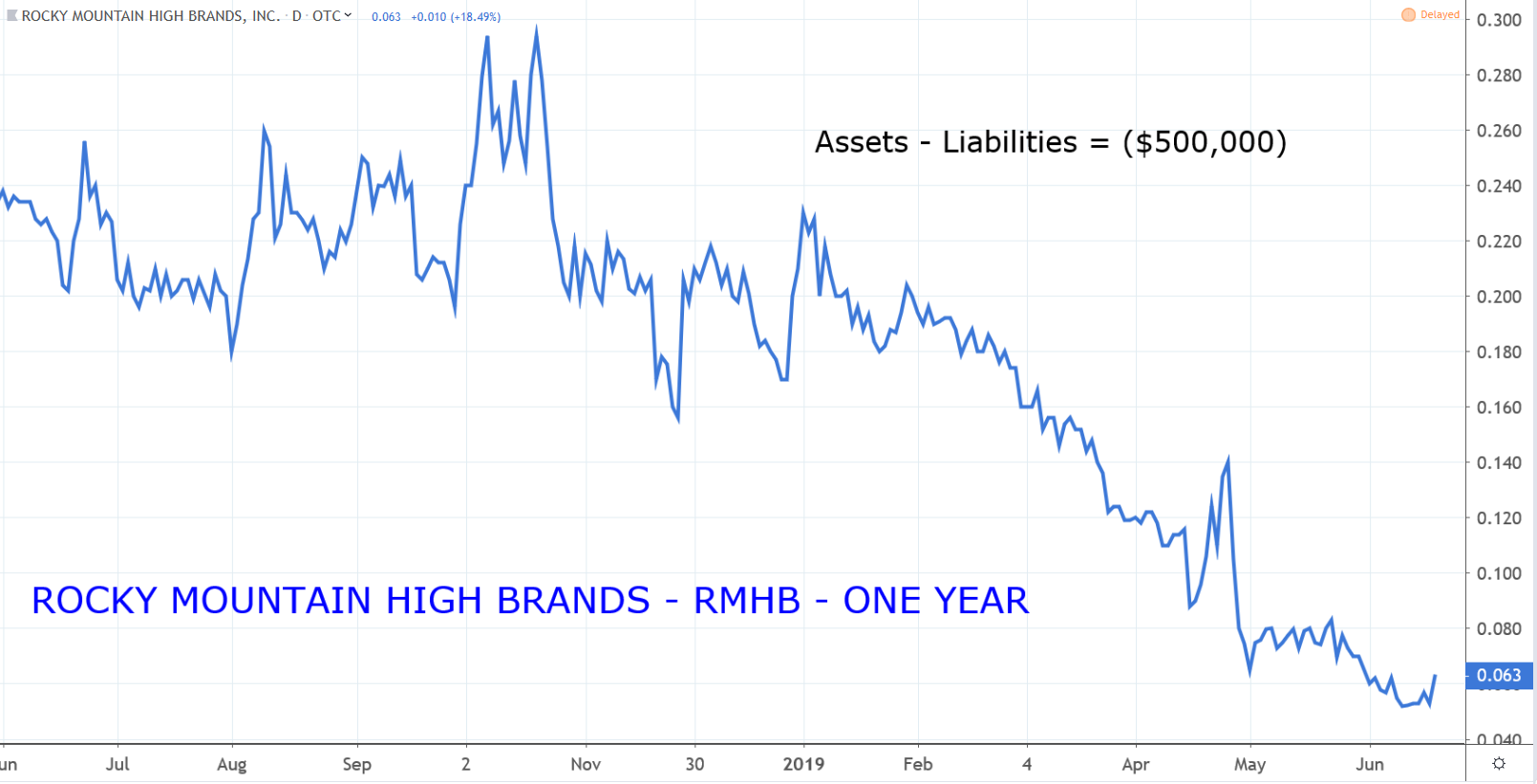 Rocky Mountain High Brands (OTCMKTS:RMHB) is a lifestyle brand management company. Their products include cannabidiol and hemp-infused products such as spring water and protein drinks. This is and old company with origins going back to 1968. It seems like in all that time they haven’t learned how to make consistent profits. Last year the company lost $3.4 million and in 2017 losses were $9.3 million. 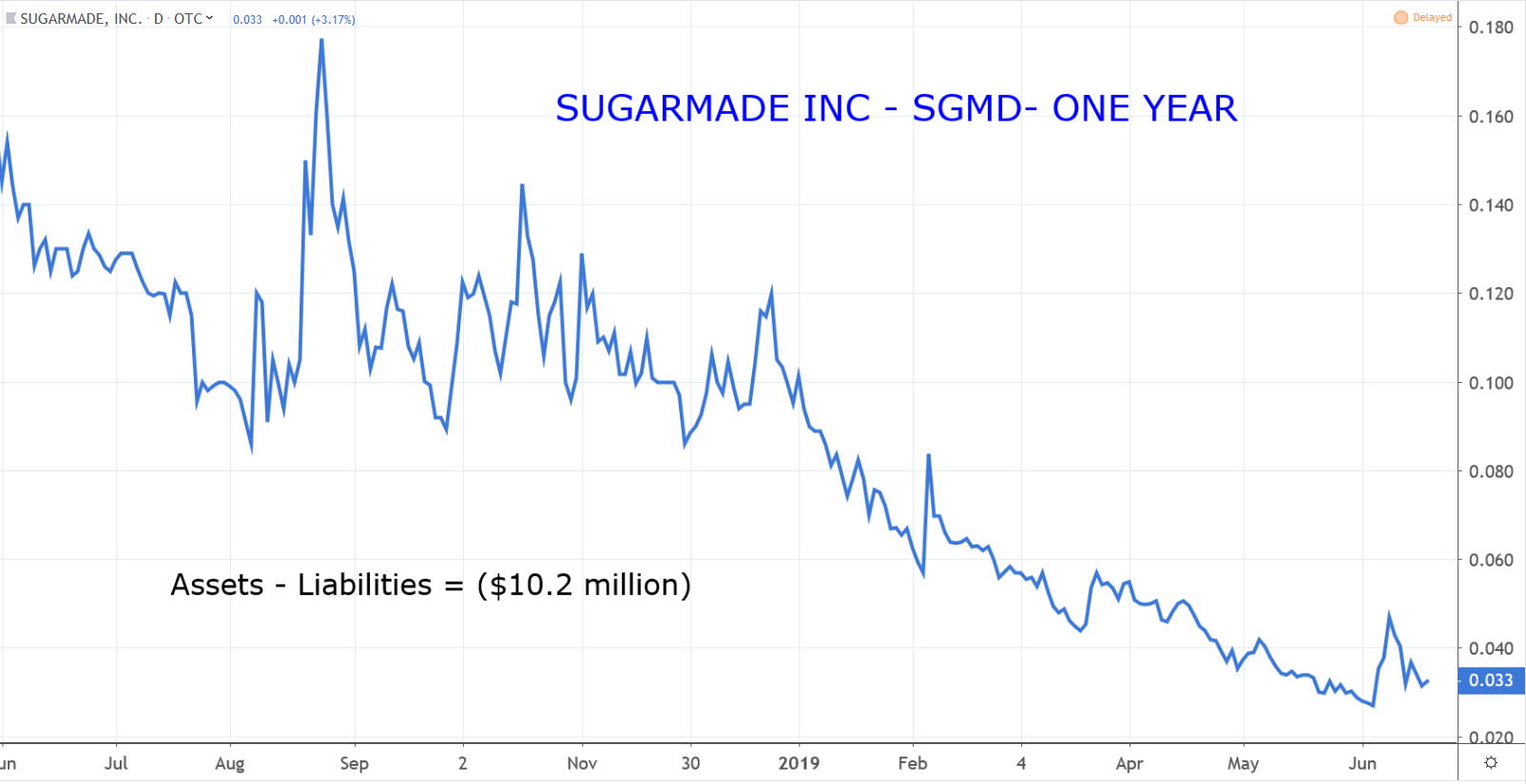 Sugarmade (OTCMKTS:SGMD) is a distributor of paper products. The company recently announced plans to enter the hemp extraction technologies and equipment market.

SGMD has unfortunately not been too sweet to its shareholders. This company hasn’t made money in years and the trend seems to be getting worse. In 2016 it lost $2.5 million and it 2017 the loss was $4.7 million. Last years loss of $6.3 million was even worse. It is no surprise that SGMD has a negative valuation. With assets of $2.2 million and liabilities of $12.4 million, the valuation is negative $10.2 million.