The young staffer was worried his boss was suicidal …

He had just found the hedge fund manager lying on his couch, reeling from a disastrous bet on bond-futures contracts.

The mistimed call had lost nearly a million dollars of client money. This was 1979, so that was a large sum, especially for this particular small investment shop.

“Sometimes I look at this and feel I’m just some guy who doesn’t really know what he’s doing,” said the fund manager.

At the time, there was no way to know that this tortured person would go on to become the most successful money maker in the history of modern finance …

***The unparalleled success of Jim Simons

Guys like Warren Buffett and George Soros get the limelight, but when it comes to returns, no one tops Jim Simons.

Starting in 1988, his flagship Medallion fund has generated average annual returns of roughly 66%, generating trading gains of more than $100 billion.

No other marquee hedge fund manager even gets close. See for yourself below (by the way, realize that you’re seeing after-fee returns to investors). 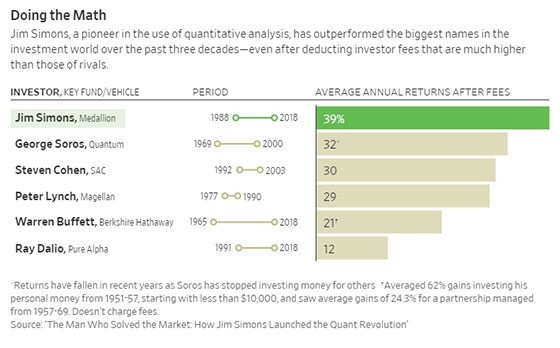 The remarkable thing is that Simons began his investment career with practically zero investment experience. He was just a mathematician who decided to try his hand at trading currencies.

There were no finance classes in his background, and no real trading experience. And unlike so many traditional hedge fund managers at the time, he had no idea how to perform basic investment analysis like estimating earnings, or using macro factors to predict changes to the broader economy.

And yet somehow, this was his result over three decades of volatile markets … 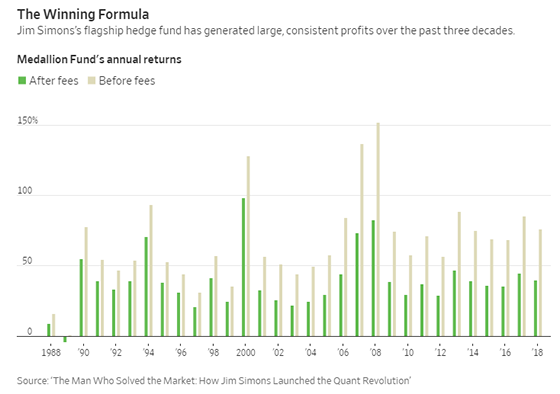 ***What’s behind this astonishing success?

For a while, Mr. Simons traded like most everyone else, relying on intuition and old-fashioned research. But the ups and downs left him sick to his stomach.

Given this, eventually, Simons decided to adopt a different approach …

He built a high-tech trading system guided by preset algorithms — basically, step-by-step computer instructions. It was a program designed to digest vast quantities of market data from which it would then select attractive trades. The goal was to remove human emotion and instinct from the investment selection process.

Simons told a friend, “I don’t want to have to worry about the market every minute. I want models that will make money while I sleep. A pure system without humans interfering.”

***If this sounds, familiar, it’s because famed investor, Louis Navellier, shares some striking similarities to Simons

I’m a numbers guy. Always have been. Since I was a kid, I’ve loved math and I knew that math was the right way to understand the world.

Said another way, I depend on evidence for my decisions.

Early in his career, Louis turned to math and computers for better investment results, and he’s never looked back.

Thanks to technological advancements, an analytical project that took one month to complete a few decades ago can be performed on high-powered computers in less than one minute today … and at less than 1% of the cost.

This massive increase in computing power is enabling us to gather, record, and monitor trillions of data points, signs, and clues … and then determine exactly what they mean.

This is what Louis and his team have been working on for years, incrementally improving models, algorithms, and inputs. It’s something they now refer to as “Project Mastermind.”

This past Tuesday, Louis held a live event that revealed how Project Mastermind works. It turned into a huge evening, with thousands of attendees who got to see how mathematics can help explode their own wealth. If you weren’t able to join, you can click here to watch a replay.

But let’s jump into some of the details of Louis’ system now to give you a sense of how it’s engineered to generate outperformance.

***Pulling back the curtain on Project Mastermind

But there are also data points related to the macro environment — for instance, how are competitors and the broader market affecting the company?

Then there’s time — certain data points are more reflective of shorter-term moves, while others relate more to the long term.

Louis’ project focuses on shorter-term price movements. As you’d probably guess, they’re often more complicated to analyze than longer-term movements. That’s because a huge variety of factors can affect the price of a stock in the short term …

But you also have to factor in countless other economic and political influences that are often overlooked. For instance, what’s the effect of today’s zero-interest-rate environment? Or geopolitical tensions with Russia and China? What about unemployment levels?

For instance, take a tech company that uses rare earth metals in its products. How might political tensions in the country that sources those metals be affecting supply? What are the correlations between both of those factors and stock movements?

It’s too much data for any one human to crunch. That’s why computers are necessary.

Similar to Simons’ mathematical approach, Louis’ goal with Project Mastermind was to use numbers to cut through the “noise.”

He wanted to identify the right combination of these millions of inputs that would help his readers find not just profitable stocks, but the ones that were most likely to make big moves in a short period of time.

***What were the results?

As we noted in Tuesday’s Digest, during Louis’ “beta test,” the system helped him find a pharmaceutical company called Depomed, which delivered 169% gains. There was also a biotech called Repligen that jumped 311%. The model also found Santarus just before it went on a 613% run.

At Louis’ event, he gave away the name of a stock that his computer system has recently identified — Clearfield Inc (CLFD).

It’s a communications company that achieved record revenue results for fiscal year 2020 (last November). Fourth-quarter revenue increased 14% year-over-year to $27.3 million, up from $24 million in the same quarter a year ago. That topped analysts’ estimates for $26 million.

In the three days since Louis’ recommendation, the stock has surged 22%.

Of course, Louis’ system anticipates even more gains to come.

If you’re curious about this latest pick, or want to learn more about how a a computerized market approach might dramatically improve your portfolio, click here.

We’ll give Louis the final word:

(Project Mastermind is) unlike anything you’ve ever seen from me before.

The impact this could have on your wealth is incredible … enabling you to “catch up” on your retirement in no time.