A Return to Recent Highs

Overnight, we learned President Trump has tested positive for COVID-19.

As I write Friday morning, the markets are rallying from their 1% pre-market selloff, though still negative.

What are investors to make of this news?

Let’s turn to Louis Navellier, who updated his readers earlier this morning:

… after stunning runs higher like what we’ve experienced in the past week, it’s not unusual for the market to “burp” and digest its recent gains. That’s what is happening today.

Wall Street used this morning’s news that President Trump and the First Lady tested positive for COVID-19 as a reason to take some profits off the table. The broader indices all opened more than 1% lower today.

Of course, the virus is a very serious thing. But I fully expect President Trump to have the best medical care and to be treated with Remdesivir, Gilead’s (GILD) treatment for COVID-19.

As a result, I don’t think we should worry too much about the recent White House cases of COVID-19.

If President Trump, the First Lady and other members of the White House recover from the virus, it should spread a lot of hope throughout Wall Street and Main Street.

Let’s join with Louis and avoid the temptation to panic.

That’s according to our technical experts, John Jagerson and Wade Hansen, editors of Strategic Trader.

In their newsletter, John and Wade combine options, insightful fundamental and technical analysis, and market history to trade the markets, whether they’re up, down, or sideways.

In their Wednesday update, they gave October the greenlight:

Everything we are seeing right now tells us that bullish investors are willing to give the stock market the benefit of the doubt for now.

Today, let’s dig into “why?” according to John’s and Wade’s three indicators, and discover what’s behind their prediction that October will see the market climbing back toward recent highs.

The first bullish indicator that John and Wade point toward is a strong, up-trending channel in the S&P 500.

The idea behind this is simple. If we look beyond the shorter-term volatility of a few days or even a week, can we see a broad, general trend in market direction?

John and Wade say “yes,” even with the pullback in September.

Looking at the daily chart of the index in Fig. 1, you can see that while the S&P 500 has experienced a recent pullback, it has not broken below the longer-term up-trending support level that forms the bottom of the channel it has been in since recovering from its bearish correction in April. 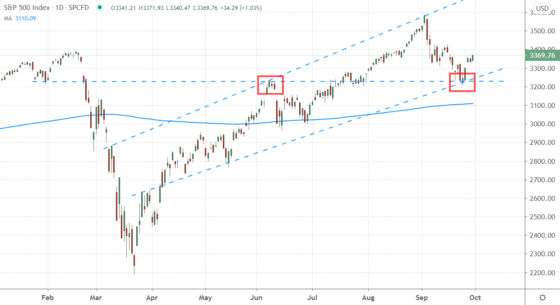 The bullish bounce up off a confluence of support levels — both up-trending and horizontal — just above 3,200 confirms that the level that served as resistance before the S&P 500’s bearish pullback in June is now holding as support in the aftermath of the index’s bearish pullback in September.

John and Wade add that the S&P 500 is still well above its 200-day simple moving average. That tells investors that the index’s longer-term bullish momentum is still intact.

Next, John and Wade highlight one of their favorite methods to gauge whether bullish sentiment is getting stronger or is starting to fade.

This indicator is a relative strength chart they create that compares two consumer-based stock sectors against each other: consumer discretionary and consumer staples.

“Consumer discretionary” represents companies like Amazon and Home Depot. These companies do better when consumers have extra money to spend and feel confident that their financial future will continue to be strong.

“Consumer staples” represents companies like Procter & Gamble and Walmart. These companies tend to do well even during economic slowdowns. That’s because people still need to buy basic items to live (shampoo, toothpaste) despite a souring economy.

John and Wade explain that these sectors tend to overperform and underperform at certain points in the overall business cycle:

Consumer discretionary stocks typically start to outperform near the bottom of the business cycle when the economy is shifting from its contraction to its expansion phase.

Consumer staples stocks typically start to outperform near the top of the business cycle when the economy is shifting from its expansion phase to its contraction phase.

John and Wade note that by comparing these two stock sectors, we can see whether Wall Street is preparing for expansion or contraction.

When the XLY/XLP relative-strength chart is moving higher, it tells you that XLY is outperforming XLP and the S&P 500 is likely going to be doing well.

When the opposite is true, it suggests bearish pressure on the S&P.

Let’s return to John and Wade for what this indicator is revealing today:

You can see in the XLY/XLP relative strength chart in Fig. 3 just how bullish sentiment on Wall Street has been since the S&P 500 reached its low on March 23. 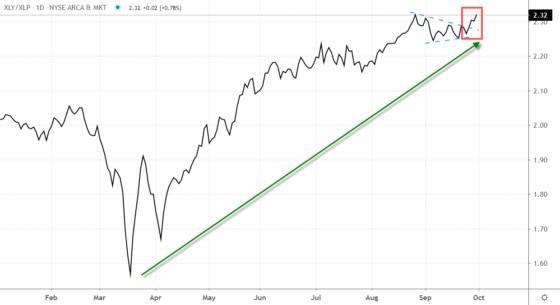 John and Wade are especially encouraged that the chart has not only maintained its longer-term bullish uptrend, but also broken out of its latest consolidation range with a bullish surge higher.

That’s because it’s a helpful gauge to measure how worried traders are that the S&P 500 might suddenly drop within the next 30 days.

So, what is it telling us today?

Two weeks ago, we looked at the VIX …

We discussed the chart shown in Fig. 4 and said there were three directions the S&P 500 might move based on where the VIX went:

1. If the VIX breaks through the current horizontal support level and starts dropping down toward number 1 on the chart, look for the S&P 500 to climb toward its all-time high of 3,588.11.

2. If the VIX continues to bounce up off the current horizontal support level at number 2 on the chart, look for the S&P 500 to consolidate for a while. 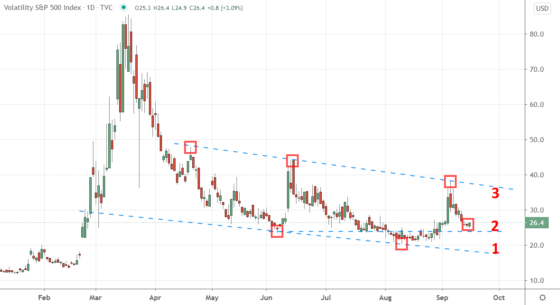 We said we thought it was most likely that the VIX would follow option 2.

As you can see in the daily chart of the VIX in Fig. 5, the index followed option 2. 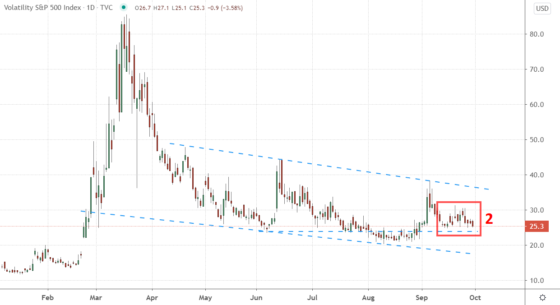 This tells us that traders are not concerned about an imminent pullback for the S&P 500.

John and Wade tell us that the VIX is still low enough that it could test its current support level. That would be extremely bullish for stocks.

So, as we’ve seen from John and Wade, we have three short-term indicators all suggesting a strong October.

Couple that with October being a historically bullish month for the market.

And as you can see below, the entire fourth quarter is easily the strongest quarter out of the year on an average basis. 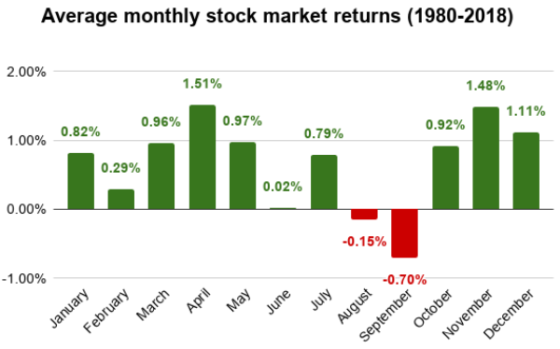 Put it all together, and the market-outlook appears good today.

I’ll give John and Wade the final word:

Yes, there has been a lot of short-term bearish noise in the stock market the past few weeks as the S&P 500 has pulled back from its all-time high.

However, short-term bearish pullbacks are normal during longer-term bullish uptrends.

We expect 3,200 to hold as support while the S&P 500 explores climbing back up toward its recent highs during October.