A “Tsunami” of Wealth | InvestorPlace

An invitation to The Awakening … an altcoin primer … what’s the real value driving prices higher?

We start today’s Digest with an invitation.

This coming Monday, September 21, at 4 p.m. ET, our cryptocurrency specialist, Matt McCall, will be sitting down with crypto visionary and one of bitcoin’s first tycoons, Charlie Shrem.

The purpose of the event is simple …

Matt and Charlie believe the crypto universe is on the verge of printing a new batch of millionaires and billionaires.

In short, they see a fuse being lit under the altcoin market — one that will set off one of the most significant explosions of wealth in the modern era. Modest investments in the right altcoins stand to turn into millions of dollars.

At Monday’s presentation, called “The Awakening,” Matt and Charlie will explain the forces that are setting up what Matt calls “one event that could change your financial life.”

Given this, in today’s Digest, let’s do a top-down look at the crypto market to make sure everyone has a base-level understanding of this explosive asset class. And then, we’ll look ahead to what Matt and Charlie will be discussing next this Monday.

***Altcoins 101 and how they can transform a portfolio

As we’ve noted before here in the Digest, they can be gimmicky “me too” products which are just trying to capitalize on investor interest in the space, or they can provide a unique twist on the crypto/blockchain/financial world that makes them truly unique and valuable.

Overall, there are hundreds of different altcoins with various degrees of individualization (and real value … or lack thereof). As you might guess, this sets up a wide spectrum of returns for investors wading into the crypto space.

While there is certainly need for caution, the potential for massive gains from the most valuable altcoins is nothing short of astonishing.

Part of the reason why is their small size. When investors wake up to an elite altcoin’s inherent value, it doesn’t take many investment dollars to get an altcoin’s price soaring.

Let’s put some numbers on this to give you a better understanding.

As I write, bitcoin’s market cap is around $204 billion. To put that into perspective, Amazon’s market cap alone is about $1.5 trillion.

In other words, relative to stocks, bitcoin is barely a blip on the radar.

Yet in the crypto world, bitcoin is massive compared to altcoins.

Below you can see how Ethereum, the largest altcoin, is only about 1/5th the size of bitcoin. The ensuing market caps trail off from there. 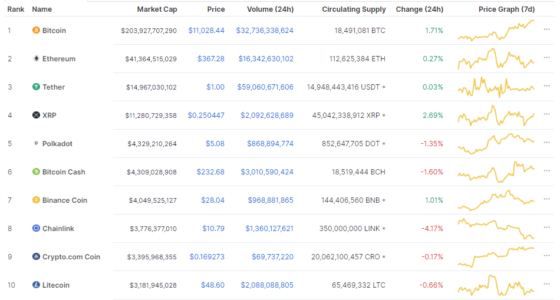 So, with such miniscule market caps, when a specific altcoin becomes “hot,” a flood of investor dollars can drive its price stratospheric in a matter of months, weeks, or even sometimes days.

I honestly believe altcoins are the fastest way to legally get rich in America today.

***But what’s behind the “elite” part of elite altcoins?

It’s fun to talk about big gains with cryptos, but let’s dig deeper.

What makes one altcoin superior to another?

What’s the actual reason for the firepower behind the massive returns?

To answer that, let’s back up a moment …

The underlying technology behind bitcoin and altcoins is blockchain.

Though I’m willing to bet you’ve heard the buzz surrounding blockchain in recent years, if not, you might just think of it as a “virtual ledger.”

Blockchain is really just a system of linked computers that records, verifies, and secures digital transactions. It’s a series of confirmed and encrypted data, spread across many geographic locations.

The benefit is it’s impossible to hack or fake, because the information is stored on an entire network of computers that check with each other for a transaction’s authenticity. So, if a hacker breaks into one computer and alters data, the blockchain network immediately picks up on the inconsistency.

Now, perhaps the easiest way to think of blockchain and cryptocurrencies is as software — and if you know software, you’re aware of how it reduces work time, cuts out middlemen, and reduces costs.

How much time has Excel saved the world, by ending the tedium of calculations with a hand calculator?

Think of how much more productive companies have been with all the added time saved by employees not having to crunch numbers.

***This “software” benefit is where the value proposition begins with elite altcoins.

Some of the most lucrative software companies on the market right now are working to cut out the middleman. Many of these are altcoins.

I describe them as the oil of the 21st century, as they’re about to mint another generation of millionaires — in short order.

Software companies have provided enormous wealth for investors from the ’90s through today because of their ability to save us time and headaches.

So, what we find with the quality altcoins is that they serve an actual purpose. These are the coins that Matt and Charlie seek out.

***What’s happening in the altcoin space right now that makes Matt and Charlie so excited about investing?

Well, that’s in part what they’ll be discussing on Monday, so I’ll leave that for them.

What I can say is that Matt and Charlie are amped up about the potential here. So, I strongly encourage you join just to learn more. There’s no obligation of any kind. Just click here to reserve your seat.

By the way, Matt and Charlie will be giving away their #1 altcoin investment recommendation, totally free. It’s their gift to you for attending.

Here’s Matt with the final word:

One of the biggest events in modern history is about to kick off.

And it directly relates to blockchain and a small group of select cryptocurrencies.

We’re going to blow this story wide open and reveal why everyone needs to know what’s happening.

If there’s one event that could change your financial life, it’s this.

It will be fascinating. It will be educational — I doubt you’ll think of cryptocurrencies the same way again. And my guest believes it could hand you a fortune that most people only dream of.

I look forward to seeing you on Monday.