Advanced Micro Devices (AMD) Stock Is Down, But It’s Not Out

If you’ve been waiting for a pullback in Advanced Micro Devices (NASDAQ:AMD), that day is here. But game-changing conditions off and on the price chart of AMD stock suggest the time to buy shares is yet to come. Let me explain.

AMD. It has been a growth darling — and for good reason. This success comes despite a hotly contested valuation and a few bears who are unwilling to accept a remarkable turnaround story. And the argument for more good things to come AMD’s way was solidified a couple weeks back, after the semiconductor outfit’s blowout earnings report.

And investors took notice in a big way.

In the report’s aftermath, shares of AMD stormed higher. An immediate gap of just over 12.5% to record highs makes headlines. Then, additional gains approaching 15% followed. The total improved AMD stock’s year-to-date return to an impressive 90% and hoisted the company’s market capitalization to $100 billion.

Yet while trillion-dollar market caps for tech heavyweights Apple (NASDAQ:AAPL), Microsoft (NASDAQ:MSFT) and Amazon (NASDAQ:AMZN) persist in the face of recent U.S.-China escalations, the standoff has hit AMD shares harder. Rising tensions have changed its market cap, at least for the near term.

In less than three sessions AMD has shed a bit more than 13%. And that loss was underscored by yesterday’s hard-hitting loss of 6.5%. Behind the pressure and relative weakness, investors appear to be reacting to President Donald Trump’s growing war against China. Now, the battles include a ban against the WeChat app from Tencent (OTCMKTS:TCEHY).

So, what? The potential problem for Advanced Micro Devices — aside from trade-war repercussions on the industry — is Tencent’s huge ties to the booming gaming market. If the industry weakens because of the ban, a bearish domino effect for AMD’s highly popular products, which help run those games, could logically follow.

And right now, that uncertainty needs to be respected based on what is developing on AMD’s price chart. 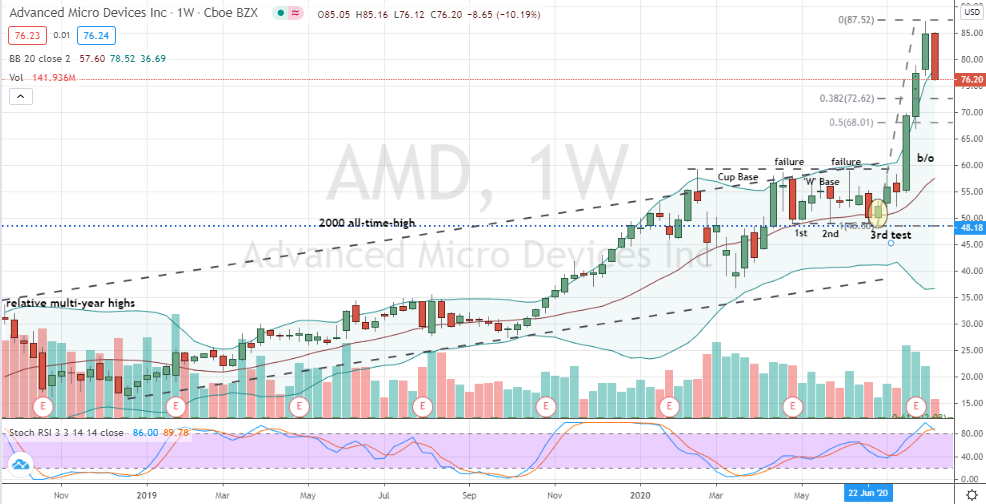 AMD remains well-positioned within a larger uptrend. And longer term, that strength is likely to continue. But it is a poor time to simply buy shares. Why?

The problem today is AMD’s confident behavior, which helped it reach its already addressed technical notoriety in 2020, appears to have topped. An overbought stochastics has gone from a support zone to an indicator now signaling a bearish crossover. AMD’s prior strength is now also a foe rather than a friend. Aggressive price action outside the upper Bollinger Band has worked its way into a candlestick topping pattern on the weekly chart.

How to Trade Advanced Micro Devices

Technically, my best guess is shares are in the process of establishing a correction on either side of 20%. If correct, AMD will challenge its 38%-50% retracement levels tied to the stock’s key July pivot low.

This is critical as the low coincided with a third test of AMD’s 2000 all-time high.

For the time being I’d simply suggest investors wait until AMD challenges support in the area of $68-$72.50. And if you’re like me and are currently positioned, hopefully that exposure includes protection such as a highly flexible collar that is bulletproof during times like today.

Chris Tyler is a former floor-based, derivatives market maker on the American and Pacific exchanges. Investment accounts under management own Advanced Micro Devices (AMD) and its derivatives, but no other securities mentioned in this article. The information offered is based on his professional experience but strictly intended for educational purposes only. Any use of this information is 100%  the responsibility of the individual. For additional market insights and related musings, follow Chris on Twitter @Options_CAT and StockTwits.