Alibaba Group Holding (NASDAQ:BABA) is becoming, like Amazon (NASDAQ:AMZN) and Apple (NASDAQ:AAPL), a stock you need to hold and ignore. 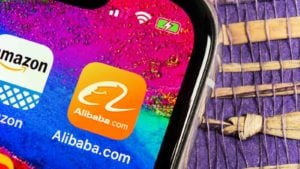 Alibaba announces earnings August 14, with analysts expecting $1.13 per share of net income on revenue of $16.39 billion.  That’s about 30% more revenue than the same quarter last year.

Alibaba stock is not cheap. Its valuation of $474 billion is about 8.4 times its annual revenue and over 50 times earnings. But that’s not extreme for an internet stock. Amazon has a higher earnings multiple and Microsoft (NASDAQ:MSFT) has a higher price-to-sales.

Alibaba is Chinese. This means it lives in a different, more favorable regulatory environment. It is also more dominant within its market than any American rival. Its cloud operates differently, and it’s miles ahead of Facebook (NASDAQ:FB) in payments.

For those worried about the American Cloud Czars, this is a defensive play.

It’s the nature of Alibaba’s cloud that really makes it different.

While Amazon sells cloud infrastructure, and Microsoft a cloud platform, Alibaba sells its own software as a service. This delivers it maximum profit, and insights into its customers it can use to drive its own commerce strategies.

Alibaba began as a way for small Chinese producers to reach shops in cities. Its latest move is an effort to organize global trade. Instead of just selling to Chinese cities, producers can use Alibaba to sell anywhere. It brings the power of Alibaba to India, to Southeast Asia, and to Africa. And its anti-counterfeit efforts are superior to those of American rivals.

Alibaba is happy to provide its marketplace to Europeans and Americans, too. Office Depot (NYSE:ODP) sees it as a lifeline, as its U.S. business model continues to dry up, the shares are worth just one-fifth what they were in 2015.

American politicians complain about Amazon having half the U.S. e-commerce market. Alibaba has 62% of China’s market. Its TMall offers far more sophisticated branding than Amazon’s, with social marketing and promotion tools American companies just assume they must build themselves.

Then there is Alipay, the company’s payments network. It’s following Chinese tourists around the world and becoming a “must have” for stores that want to sell to them. It has already a $150 billion business, with lower costs than Visa (NYSE:V) and over 1 billion users.  This before Facebook even gets started.

Alibaba is one of three Chinese “Cloud Emperors.” The other two are Tencent Group Holding (OTCMKTS:TCEHY), built around games and the WeChat service (which also handles transactions), and Baidu (NASDAQ:BIDU), built around a search engine.

Because the NASDAQ began listing dual share companies before Chinese markets, Alibaba took its public listing here, selling co-founder Jack Ma as a Horatio Alger story. But Ma, too, is very Chinese, and as the U.S. Administration seeks to close itself off from China, Alibaba is becoming more so.

The new willingness of the Hong Kong exchange to accept dual-share listings means Alibaba will soon sell stock there. In preparation the company is doing an 8:1 stock split, which took effect July 15.

It means more liquidity for U.S. shareholders, and more competition for shares from Chinese investors. Given the past behavior of these investors, there may also be more volatility, but this will reward the patient.

The Bottom Line for BABA Stock

While the U.S. is trying to put its Cloud Czars in a box, China’s Cloud Emperors are free to fly around the world. None fly higher than Alibaba. It’s a stock a tech-oriented investor needs to hold for the long term.

Dana Blankenhorn is a financial and technology journalist. He is the author of a new environmental story, Bridget O’Flynn and the Bear , available now at the Amazon Kindle store. Write him at danablankenhorn@gmail.com or follow him on Twitter at @danablankenhorn. As of this writing he owned shares in MSFT, AAPL, BABA and AMZN.