Amazon Stock Price Will Get Back to $2,000 and Keep Going

In this market, investors holding Amazon.com (NASDAQ:AMZN) likely are a bit worried. AMZN isn’t cheap. Amazon.com’s massive reach makes its sensitive to consumer demand. And the Amazon stock price already is dropping, falling over 7% in just the last six sessions. 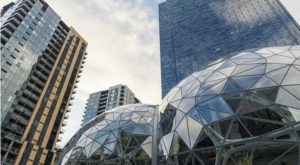 And it wouldn’t be a total surprise if AMZN stock fell even further. Shares declined by one-third in less than three months during the market declines of last year. Should trade war fears drive another broad market pullback, Amazon stock is unlikely to emerge unscathed.

But from a long term standpoint, Amazon.com looks just fine, in fact better than fine. The Amazon stock price admittedly hasn’t returned to last year’s peaks. AMZN then traded at over $2,000 and briefly had a trillion-dollar market capitalization. But I expect it will get back to those levels and beyond, even if the wait might require some patience.

For most of the past decade, AMZN stock has been cited as the epitome of an overheated market. AMZN always has looked expensive, often trading at earnings multiples over 100x. It historically has generated little in the way of profit: operating margins were 2.3% as recently as 2017.

The combination made AMZN seem like a symptom of a bubble. What would happen if the company stopped competing solely on price? For how long would investors keep paying nosebleed multiples for a company that went public last century? At some point, bears argued, Amazon stock inevitably would come back to Earth.

Despite some stumbles over the years, the supposed bubble never popped and with good reason. Amazon earnings have stayed low because the company chose to kept them there. It has for years invested in back in business, trading profit dollars today for more profit dollars tomorrow (or, perhaps more accurately, five years from now).

As I’ve argued for some time, simply looking at Amazon’s P/E multiple is not the way to properly value its business. Amazon’s high multiples haven’t been the case, as bears have argued, of the market not paying attention. It’s precisely the opposite, in fact. And that’s why the Amazon stock price has managed to stay so elevated, for so long.

The good news for Amazon stock is that the long term strategy remains in place,  yet earnings are starting to soar regardless. Operating income tripled in 2018. Profits then more than doubled in Q1.

Much of the growth is coming from Amazon Web Services, whose profits rose almost $3 billion in 2018 and another $800 million-plus in the first quarter of this year. International losses are starting to narrow as well: that business was nearly breakeven in Q1. North America sales continue to rise steadily, and profits in that segment, rose almost exactly 100% year-over-year in the first quarter.

What makes AMZN stock attractive is that none of those trends are likely to change. North America margins still are in the 6% range, and have room to further expand over time, even if the rollout of one-day shipping should provide a near-term hit. Revenue growth is going to continue as more purchases move online. And advertising represents another billion-dollar opportunity at significantly higher margins.

AWS continues to lead Microsoft (NASDAQ:MSFT) and Alphabet (NASDAQ:GOOG,NASDAQ:GOOGL) in cloud. International profits are on the way. Even assuming Amazon continues to invest in the business, and doesn’t look to squeeze additional pricing dollars out of its customers, earnings are going to keep growing steadily.

So the argument that Amazon can’t really make profits has been debunked, and slowly but surely the seemingly outlandish valuation is coming in. Consensus EPS estimates suggest a 67x multiple to 2019 EPS and a sub-50x multiple to 2020 EPS.

Earnings next year are expected to 40%; even a deceleration means Amazon’s multiples starting getting closer to that of other tech stocks in reasonably short order.

But there’s really no reason why the Amazon stock price should trade in line with other tech stocks. It is a company that dominates enormous industries and has room to enter even more.

One big reason why Walgreens (NASDAQ:WBA) and CVS Health (NYSE:CVS) are trading at the lows is that Amazon acquired PillPack last year, and can challenge their dominance in prescriptions. Prime Video and Prime Music still have room for growth. The same is true for the acquisition of Whole Foods Market and other efforts to return to brick-and-mortar retail.

EPS likely heads near $40 next year. There’s no reason why it can’t get to $80 over the next five years (that would represent just 15% annual growth, a notable deceleration from recent performance). Give AMZN even a 40x multiple and the stock rises to $3,200. Discounted back at 10%, that in turn values AMZN at almost exactly $2,000 right now.

In other words, even if Amazon’s growth slows, and its earnings multiple comes in, its stock still is undervalued. It might seem hard to believe given how expensive the stock has looked for so long. And while it’s hardly cheap now, as long as Amazon keeps doing what it is doing, it will look cheap much sooner than investors might think.