Warren Buffett of Berkshire Hathaway (NYSE:BRK.A, NYSE:BRK.B) did not just buy into Amazon (NASDAQ:AMZN). One of Buffett’s portfolio managers bought some Amazon stock.  That will show up in the company’s next 13f filing, which investors scour like Kremlinologists for hints on what they should do. 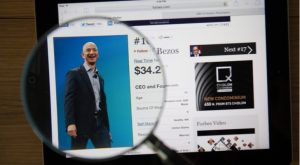 But Buffett himself didn’t buy Amazon stock. He likes to say he still doesn’t understand technology.

As Buffett teaches through his annual letter to shareholders, let him now learn from the letter of Amazon CEO Jeff Bezos, released this week.

Jeff Bezos’ most stupendous insight, headlined in his first 1997 investment letter, was that Amazon is an infrastructure company. His latest letter  illustrates the result of that insight — 58% of Amazon’s gross merchandise sales are now from independent, third-party sellers.

“Third parties are kicking our first party butt. Badly,” he writes. They know their customers better than Amazon’s sales algorithms know them. By giving third-party sellers access to all of Amazon’s infrastructure — its cloud, its transaction processing, its tax calculation, its warehousing and shipping — these sellers can focus on what matters to them and to their retail customers.

Clouds are the most important, and profitable, form of new infrastructure. Clouds, when used not just by those who built them but by everyone, drive up productivity and create deflation like nothing else we’ve seen. Now that its cloud infrastructure is largely in place, Amazon can bring nearly 30% of cloud revenue to the net income line.

Once any critical infrastructure is in place, that becomes an enormous profit engine. In its first-quarter report, Amazon earned $3.56 billion, $7.09 per share fully diluted, on revenue of $59.7 billion. Sales were up 17%, but profits more than doubled, compared with a year earlier.

It’s this critical, privately owned infrastructure that made Sen. Elizabeth Warren put a target on Amazon’s back. Bezos alludes to this in his letter, a topic I covered in my own newsletter this week. “Retailing is no longer the monopoly Walmart (NYSE:WMT) threatened to make it 25 years ago,” when the Web was first being spun, I wrote. “The difference is Amazon.” (Buffett recently sold out his Walmart position.)

There’s a second important point in Bezos’ latest letter — that failure should scale as well as success. “If the size of your failures isn’t growing, you’re not going to be inventing at a size that can actually move the needle,” he writes. The Fire phone failed but Echo, the two-way speaker launched at the same time, became a huge success.

The Bottom Line for AMZN Stock

Amazon’s infrastructure delivers enormous opportunities for it to try things and make mistakes. Its spending on content was $1.7 billion last quarter, even though only half of Prime members watch what it streams, even though Apple and Spotify (NASDAQ:SPOT) continue to kick its butt in music streaming.

Dana Blankenhorn is a financial and technology journalist. He is the author of a new mystery thriller, The Reluctant Detective Finds Her Family, available now at the Amazon Kindle store. Write him at [email protected] or follow him on Twitter at @danablankenhorn. As of this writing he owned shares in AMZN, MSFT and AAPL.