The cannabis industry has not been trading all that well lately, and Aphria (NYSE:APHA) is hardly an exception. Although Aphria stock has some unique qualities vs. its peers, it’s not helping to slow the bearish developments on its chart.

Earlier this month we covered the bearish descending triangle that was wreaking havoc on Canopy Growth (NYSE:CGC). Luckily for InvestorPlace readers, they were able to see this breakdown setting up before it happened. However, similar patterns have been seen elsewhere too.

Cronos Group (NASDAQ:CRON) had a similar development in its charts, while Aurora Cannabis (NYSE:ACB) has been flashing some warning signals too.

Unfortunately for Aphria, the same bearish setup could be taking hold. The fear here is that the floors give out and shares tumble lower. Will it lead APHA stock to $5 per share?

Let’s look at the charts.

As you can see, the descending triangle has struck Aphria stock as well. That’s where a declining trend-line (blue line) squeezes a stock lower against a static level of support. In this case, that support level was near $6.30, which has since given way. 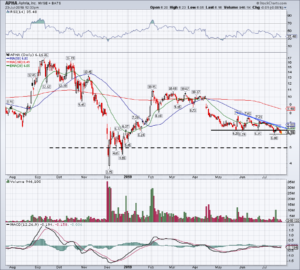 Some hopeful bulls may argue that APHA stock looks set to reclaim this level. After all, it did earlier this month after breaking below this mark. However, shortly after reclaiming former support, Aphria was quickly batted back below it after running into downtrend resistance.

It’s not as if the bull case has been completely obliterated. However, without getting back above some of these key levels, the stock is set to struggle in the short term. For the bulls to be back in healthy standing, Aphria stock needs to first reclaim prior support. Then it needs to push through downtrend resistance. Currently, that will also require APHA to reclaim the 20-day and 50-day moving averages.

All of this is possible, but the odds aren’t good. Should the stock take out its lows from earlier this month at $6, it could tumble into no man’s land. Although it cracked a few times, $5 drew in buyers throughout the month of December. Should $6 fail as support, $5 is a reasonable downside target.

Breaking Down on APHA Stock

With a market cap of “just” $1.5 billion, Aphria is certainly one of the smaller names among its peers. That could make it an attractive investment or M&A candidate in the future. That’s especially true given that big brands — like Altria (NYSE:MO) and Constellation Brands (NYSE:STZ) — as well as the larger cannabis companies are constantly looking to put investment dollars to work.

Aphria is going through some serious growth right now. In the prior four quarters before the most recent results in February, APHA had grown sales between 100% and 140%. Solid growth for sure, but nothing like what the company’s most recent results looked like. Revenue of $55 million surged almost 575% (although it did miss analysts’ estimates).

That’s some of the strongest growth in the industry and for a company with a $1.5 billion market cap, it could surely draw some attention.

Aphria Stock vs. Its Peers

Yet, ACB, CGC, and CRON command market caps of $6.8 billion, $12.2 billion and $5.1 billion, respectively. Quite the difference from Aphria’s $1.5 billion valuation.

That said, CRON and CGC have billions in cash thanks to investments from larger companies. Among the group, APHA has the lowest cash equivalents. Aphria doesn’t have a weak balance sheet per se, but it lacks power vs. some of its peers.

Does that make it undervalued? Maybe. But I need the charts to cooperate when dealing with a speculative name like Aphria stock before making it a buy.