Apple Stock, The Spotify War and the Streaming Gold Mine

Apple (NASDAQ:AAPL) has been beaten to a big share of the riches from streaming music by Spotify (NASDAQ:SPOT). And Spotify is seeking an even bigger share of the pie by accusing Apple of being a monopoly. 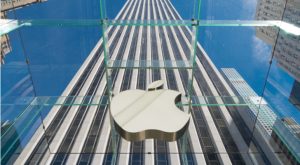 The charge was leveled in March before European regulators. It was that Apple’s cut of two years’ subscription revenue in its App Store is an “Apple Tax” that stifles innovation and penalizes users.

Spotify says these payments inflate its prices above those of Apple Music, and that Apple penalizes users who get the app directly from Spotify. Apple’s response is that the case is irrelevant, because fewer than 1% of Spotify users are subject to even its 15% subscription fee.

The Modern Gold Mine

Streaming has become a gold mine for services, as consumers stop buying physical media and instead prowl the libraries of streamers for the tunes they want. Spotify alone had 100 million customers in its first quarter report. Goldman Sachs (NYSE:GS) now expects the streaming market to be worth $27.5 billion per year in 10 years, representing more than half the total music market, as the number of subscribers grows ten-fold.

Before this pie is served, of course, it must be divided among the services, the songwriters, the artists, publishers and recording labels. As was true with records and CDs, the artists who make the music are being taken to the cleaners by the suits. They may get just $5,000 when their music is heard 1 million times.

The fight between Apple and Spotify isn’t about cutting the pie, but who will get to do the cutting. When Apple was getting growth from its iPhone, it could ignore streamers. Now that its growth is coming from services, it can’t.

Apple is thus breaking up its once-beloved iTunes software  into separate apps for podcasts, music and video. The iTunes software was said to be a bloated mess that allowed services like Spotify to dominate streaming  and allowed other services to dominate other niches.

Apple is now focusing more attention on its own Apple Music app for streaming. Analysts feel Apple Music is a business that could be worth $20 billion by itself.

That’s a conservative estimate because Spotify is worth $27 billion, and there are a host of competitors from Amazon (NASDAQ:AMZN), Alphabet (NASDAQ:GOOG, NASDAQ:GOOGL), and many others worth billions more. The business is rapidly going niche. The biggest streaming app in Africa, for instance, is Chinese.

The question Spotify really wants the Europeans to consider is whether Apple’s control over devices and its app store can be used to control the rest of the industry. Since Spotify is based in Sweden, and Europe has few big tech companies, it’s going to get a hearing.

The Europeans have not yet decided whether to investigate Spotify’s claims of monopoly.

But the whole mess illustrates how late Apple has been to the content party. Apple’s Worldwide Developer Conference show early in June served to highlight how far behind it is in online TV, news and music — markets its devices helped create and on which it wants its cloud to capitalize.

You can call this a glass that’s half-empty or half-full. Apple remains focused on its software, which defines its hardware, rather than the content that runs through it. It is now shifting its attention to industries that have grown rich off that inattention.

Dana Blankenhorn is a financial and technology journalist. He is the author of a new environmental story, Bridget O’Flynn and the Bear, available now at the Amazon Kindle store. Write him at [email protected] or follow him on Twitter at @danablankenhorn. As of this writing he owned shares in AMZN and AAPL.