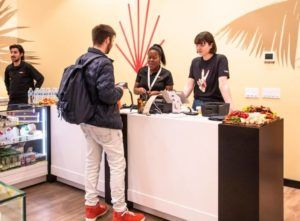 The interior of a High Tide Canna Cabana store in Toronto. (Photo courtesy of High Tide)

The retail M&A trend appears to be driven by a market that’s growing more competitive and crowded in certain areas, large chains attempting to cement their competitive advantage and expand their brand portfolios as well as retailers seeking quick expansion in existing markets.

“This is about retail experience and brand affinity. … Friendly Stranger has been around for 25 years,” Fencott said.

“Obviously, in the cannabis industry, that’s a huge swath of time.”

Fencott said another benefit of the deal is Friendly Stranger’s experience in the higher-margin marijuana accessories market, a retail segment with less red tape than cannabis itself.

The acquisition will quickly boost Fire & Flower’s Ontario presence, with Fencott expecting to approach the province’s current 30-license cap in the first quarter of 2021.

Those acquisitions bring Delta 9’s store tally to eight, including five in Manitoba.

Delta 9 CEO John Arbuthnot said he considers the crowded Alberta market, which has roughly 540 store licenses to date, to be “past saturation.”

“In that type of market instance, entering the market and doing a new store build actually becomes quite difficult,” Arbuthnot said.

“Not only because it’s difficult to find a spot on the map that’s not already occupied, but also you’re getting in and you’re fighting this uphill battle against other established retailers, you’re trying to acquire their customers who were already, to a certain extent, sticky or loyal.

Arbuthnot said Delta 9’s Alberta and Saskatchewan acquisitions serve as steppingstones to further growth, “where, now that we are a licensed entity and worked through that due diligence process with the regulator, any subsequent transaction in those markets can be done much more quickly.”

Although Arbuthnot expects further consolidation in Canadian cannabis retail, he highlighted the importance of considering whether acquisitions create value.

“And I think too much in the cannabis space, early on, was about getting deals done, and the price didn’t matter, and (the attitude was), ‘Let’s just throw a bunch of assets together and hopefully it’ll make sense,’” he said.

“And obviously, we’ve seen that that didn’t (make sense). So I think people are being a little bit more targeted in terms of what type of deals they’re entering into, whether that’s us or the rest of the space.”

“To get ahead of the competition, size and scale is imperative,” High Tide CEO Raj Grover told Marijuana Business Daily.

“And the Meta acquisition gives us exactly that. We practically doubled our footprint to 66 stores with this transaction.”

He also said High Tide is pursuing a white-label cannabis opportunity that will benefit from higher store volume.

Outside the largest urban centers, he explained, much of Canada is thinly populated relative to the United States, leaving less room for local competition.

“Too many competitors in close proximity to each other potentially results in aggressive price wars, which is a losing battle for everyone, for all retailers,” Grover said.

“Due to the market saturation, competing on price becomes the most important mandate for retailers, but that compromises customer service and overall customer experience as well,” he continued.

“So, retail consolidation, in my mind, helps solve this problem and creates a healthier landscape for the industry to not just survive but thrive.”

Canada’s biggest single market, Ontario, has been well behind the curve in licensing sufficient cannabis stores since legalization and only recently increased the pace of licensing to 40 per month.

He noticed increased interest in Ontario store acquisitions after a regulatory moratorium on change of control over store licenses expired in December 2019.

Some stores have been sold before they’ve even opened, he said.

“There’s people who never thought they’d have to wait a year to get an inspection and open and just can’t hold it, or don’t want to hold it for a year, so they’re happy to sell their location,” Maurer said.

“There’s, on the other side, buyers that are happy to look at good locations and buy them from people that are not interested in holding them without revenue for a year at a time.”

As licensing finally ramps up in the province of 14.7 million people, Maurer believes some store owners’ concerns may drive new acquisitions.

7 Dangerous Dividend Stocks to Stay Far Away From