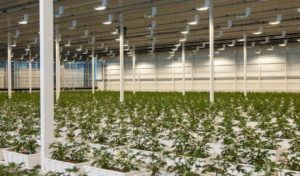 Interior of the Aurora Sky facility in Edmonton, Alberta.

Terry Booth’s “retirement” from Aurora Cannabis was revealed after stock markets closed Thursday, along with the elimination of close to 500 full-time positions.

Booth invested 2.5 million Canadian dollars ($1.7 million) of his own money in the startup in 2013, and near the height of the cannabis stock craze last summer, his holdings in the company reached CA$159 million.

MJBizDaily takeaway: Booth is the latest high-profile Canadian cannabis CEO to walk away from his job after failing to live up the expectations of investors.

Experts say the cannabis industry has entered into a new phase of growth that demands a certain skill set lacking in most founder CEOs.

Companies and their investors are now looking for chief executives to deliver on their promises.

“I’d like to keep it going,” said Rick Cusick, co-founder and board member of the firm. “The company is still intact but has lost a great deal of its power in the marketplace without Whoopi’s name.”

The company founded its business in 2016 around a line of women’s health products.

MJBizDaily takeaway: Celebrity investors in cannabis companies were considered a novelty a few years ago, but they are common today.

Whether more famous names decide to no longer affiliate themselves with marijuana companies and exit the business remains to be seen.

The New Mexico Court of Appeals ruled that medical marijuana providers can claim a tax deduction for prescription MMJ, which offers dispensary owners a potential tax break that is unavailable in other states.

MJBizDaily takeaway: Depending on the MMJ producer, tax claims could “carry a multimillion-dollar price tag for the state Taxation and Revenue Department,” the Albuquerque Journal reported.

Illinois adult-use cannabis retailers saw nearly $40 million in sales last month, according to the state Department of Financial and Professional Regulation. January was the first month of legal recreational cannabis sales in the state.

MJBizDaily takeaway: By comparison, Michigan’s recreational marijuana sales came in at $6.5 million in December 2019 – which was that state’s first month of licensed adult-use sales.

This week saw five more states abandon plans to have federal agriculture authorities sign off on their hemp rules.

The voluntary rejections of the U.S. Department of Agriculture’s plans for the hemp industry came as USDA officials doused hopes that its hemp regulations would be changed in 2020 to favor producers, despite an avalanche of pushback to the agency’s prescription for growing and testing the new commodity.

But there are downsides to national regulation.

The federal government moves more slowly than states do. And though prominent politicians show signs of warming to cannabis, that doesn’t mean they’re ready to let the free market take over.

Many industries complain of overregulation from the federal government, and cannabis will likely be no exception.

Ralph Lauren to Cut Jobs in Effort to Save $200 Million