Bank Earnings as a Crystal Ball

This week kicks off the beginning of heavy reporting for Q2 earnings season, and everyone wants a crystal ball.

Knowing whether earnings will come in better or worse than anticipated is always coveted information. After all, if you know which way the market is headed, with enough courage and leverage, you can make a literal fortunate overnight. Of course, you can lose everything — and more — just as quickly …

But knowing how earnings will affect market direction is especially top-of-mind right now. That’s because U.S. stocks are walking a bit of a tightrope — on one hand, we’re at record highs with low inflation, and the Fed is looking to keep the party going with a rate cut at the end of the month. On the other hand, many critics are wary of lofty market valuations, dangerous debt levels, and the fear that disappointing earnings could roil investors and send the markets into a tailspin.

If only we had that crystal ball.

This desire for an edge is so strong that top hedge funds, institutions, and quant shops pay millions of dollars every year to research groups in order to create models and algorithms to help predict the markets.

Fortunately, here at InvestorPlace, we have our own version of that — one of the most respected quants in the business, John Jagerson. Best of all, we won’t charge you a dime to access his market wisdom.

Regular Digest readers know that we frequently ask John to run market studies for us. In doing this, John accesses historical market data to identify patterns and trends. Then he uses that information to help make well-informed predictions as to what might happen in the markets going forward.

For example, in mid-May, after a huge down day in the market when things looked especially bearish, John ran a study of past similar situations. Based on that study, he forecasted that the market would actually be up at least 5% come 30 days later. It turns out, we needed an extra week, but 37 days later, the market was up 5.5%.

That’s the power of melding historical data with a brilliant quant investor — it’s as close to crystal-ball investing as you’ll get.

In today’s Digest, let’s dive into another market study courtesy of John. You see, this week, many of the big banks report earnings. In the past, how they’ve performed has served as a powerful leading indicator, helping predict broad market direction over the next 60 days. Today, let’s dig into those details and use them to help get an idea as to how the market’s tightrope act may play out … and what that means for your portfolio.

Jeff: John, how about we start with just a broad overview?

John: Sure. The quarterly earnings reports are on their way. One concern this quarter is that stocks are at an all-time high — or at least, the S&P 500 is. And yet earnings in the first quarter were slightly below the same quarter in 2018.

Profits across all sectors are expected to be down a more significant -3% this quarter compared to the second quarter of 2018 — which raises some questions about whether stocks are at a reasonable value.

One thing we can do to help better understand stock valuations and the health of the broader economy is look at earnings from our money-center banks.

Jeff: What exactly is a money-center bank?

John: It’s like a traditional bank. They do most of the same things but they also focus on business with governments, central banks, and very large corporations. It’s a subtle difference but think about the large names like Citigroup, Bank of America, and Wells Fargo and you can start to get the idea.

Jeff: Why are these banks good barometers for the broader economy?

John: Because they’re the source of capital for businesses. If a business is growing, they will almost certainly want a lender for short-term and long-term financing. If wages are doing well, mortgage demand will be high and consumers will want greater lines of credit also. If any of that starts slowing or businesses worry that it will slow, it shows up in the banks because financing is at the very start of those other economic activities.

This week, these big money-center banks begin reporting. Citigroup and JPMorgan will kick things off Monday and Tuesday. There’s a lot of pressure on the banks to pull a rabbit out of their hat and say that the business environment is improving and higher prices are justified.

This is important because year-over-year declines in bank earnings have a track-record for leading big declines in the market.

Jeff: What’s happened in the past when the banks have disappointed?

John: The last four times the money-center banks and major investment firms reported a year over year decline in earnings, the market dropped significantly or consolidated three out of four instances.

Jeff: Wait — is this causation or correlation?

John: I wouldn’t go so far to say that the bank reports “caused” the declines, but I would say that the reports revealed the underlying weakness in the market.

(NOTE: John provided the chart below, which shows the performance of the S&P following the last four year-over-year money-center earnings declines). 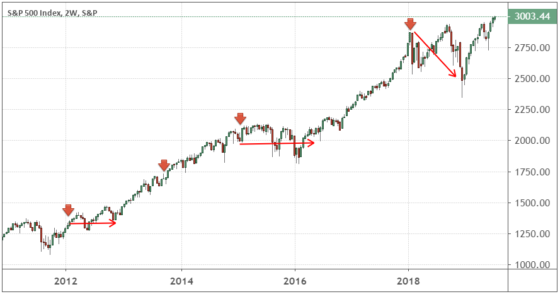 Right now, analysts expect bank earnings in the second quarter to be above the same quarter last year which could keep sentiment high. However, whether the banks beat earnings from last year is just one part of the equation. The other question is whether the banks will beat analysts’ expectations for this quarter.

Jeff: So, on that note, let’s pivot to the study you conducted. What did you look at exactly, and what were the results?

John: I designed a study that looked at the market’s reaction to the average surprise or disappointment across the major money-center banks and investment companies since the 2008 financial crisis. I think this can give us a guide for what to expect as we watch the reports stream in this week.

Analysts have a very strong bias towards underestimating earnings numbers. Therefore, in any given earnings season, 70% of companies will “surprise” by beating their estimates. This is even more extreme for the banks and investment companies. It’s rare for the entire banking sector to miss low expectations. So, a positive surprise didn’t really tell me anything historically. It wasn’t a bad sign for the market, but it wasn’t anything I would consider a buy signal either.

Disappointments, however, are a bigger deal because it’s hard to miss the expectations of analysts who are already underestimating your earnings. In those cases, if more than 30% of the banks and investment companies disappointed expectations, the market dropped an average of 7% over the next 60 days.

There are exceptions to this rule: for example, the most recent instance of this kind of disappointment was when the 4th quarter reports for 2018 were released in January 2019 just as the market was beginning to recover from a surprise bear market.

What is more typical in this situation was the crush of disappointments that occurred with the 4th quarter reports of 2014 that were released at the start of 2015. Following that reporting cycle, stocks consolidated and then dropped more than 14% before reaching a bottom late that year.

John: You have to consider the bias toward reporting positive earnings. Imagine that you are an analyst and your clients want your estimates. But you know they will get angry if your estimates are high and the company disappoints.

And nobody cares — or they think you are a genius — if you underestimate earnings.

Investors hate losses much more than they worry about missed opportunities. So, analysts play it safe and underestimate earnings. Yes, everyone knows this, which is why positive surprises have to be REALLY positive to move the stock much. Whereas, a mild disappointment can send a stock down 10% overnight.

Jeff: Wrapping up, how do you see all this playing out?

John: In my view, there are three different potential outcomes this week. If the banks experience a year-over-year decline in earnings, which is very unlikely, all bets are off and I wouldn’t be surprised to see a major correction.

If the banks surprise expectations, investors should consider that a positive for the market, but not the most powerful leading indicator.

The third outcome is what I would like to see the market avoid — the banks see an increase in earnings compared to last year, but they disappoint analyst expectations for that increase. If that happens, the odds for a correction rise considerably and investors may want to add a hedge to their portfolio against a short-term decline.

Jeff: When will we have enough of these money-center bank earnings to get an idea as to where we stand?

John: We’ll see 15 of them report by this Friday the 19th, which will be enough to draw conclusions. There are a few stragglers all the way out to the 31st and a couple more in early August.

As I write Monday morning before the market has opened, Citigroup has just reported earnings and beat expectations. The bank posted profits of $1.95 per share compared with analyst estimates of $1.80 per share. It’s up 0.63% pre-market. So far, so good.

Here in the Digest, we’ll continue to monitor how the earnings come in and let you know what that means for market direction.

They’re currently sitting at 92-for-92. And these trades are posting an average annualized return of roughly 48%. Kudos to the guys and the Strategic Trader subscribers for this remarkable performance.

Trading options with John and Wade is a great market skill to add to your investment toolbelt — especially if rates are going down later this month. In a low-yield environment, options are a great way to keep generating cash for your portfolio. To learn more about John and Wade’s strategy, and how you can be a part of this winning track record, just click here.