California cannabis companies will have to pivot, again, under new stay-at-home order 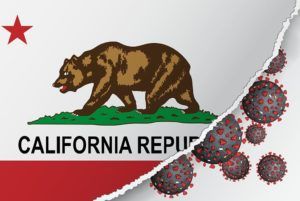 Facing the prospect of a new stay-at-home order, California marijuana businesses might have to scramble yet again to stay in compliance with business restrictions designed to combat a surge in coronavirus infections.

The new order takes effect Saturday, and its restrictions will be implemented only if any of five specific California regions see ICU bed capacities drop below 15% – a threshold not yet met by the five regions.

Friday afternoon, five California counties – Alameda, Contra Costa, Marin, San Francisco and Santa Clara – announced they were implementing their own restrictions, effective Sunday, The Sacramento Bee reported. Those counties, which are home to hundreds of licensed cannabis businesses, represent a portion of one of the five state regions.

If any of the five regions hit that 15% ICU level – and at least four total are expected to in the coming days, CNN reported – then the statewide cannabis trade will be among the industries feeling the pinch.

The good news for California marijuana businesses is that the industry has again been categorized as “essential,” meaning all companies will be allowed to continue business operations, the state’s Bureau of Cannabis Control (BCC) noted in a news release.

According to the BCC, “cannabis licensees can otherwise continue to operate in the same manner they are now, including activities allowed by approved disaster-relief requests, provided their operations comply with state and local rules and regulations.”

The agency directed marijuana companies to the state’s COVID-19 website to find out if they’re in a region affected by business restrictions.

The new state order restricts marijuana stores to 20% customer capacity at a given time, the BCC release noted, meaning the vast majority of retail will have to be done via delivery or curbside pickup.

“Any licensee who continues to operate must adopt social-distancing and anti-congregating measures and must follow the CDC’s” protocols for businesses, according to the BCC release.

The BCC also encouraged marijuana businesses to take advantage of “automatic filing extensions, interest-free payment plans or a hiring tax credit of up to $100,000,” all of which are available to licensed companies.

Marijuana businesses will be eligible to receive up to $25,000 apiece from a $500 million pool of state grant money that Gov. Gavin Newsom set aside for companies affected by the new possible shutdown, said Jerred Kiloh, president of the Los Angeles-based United Cannabis Business Association (UCBA).

According to a UCBA news release, the grant money will be administered through the California Office of the Small Business Advocate. Companies may register here for updates from the state.

“They said, ‘Move fast, it’s a limited amount, and it’s first-come, first-served,’” Kiloh said of the loan program, referring to conversations the UCBA has had with the Newsom administration.

Specifics about the loan program have not been announced, however, and the Newsom administration did not confirm that marijuana businesses will be eligible for the grants.

Josh Drayton, communications director for the California Cannabis Industry Association (CCIA), encouraged marijuana businesses to keep in touch with local officials in the event that cities and counties take action on top of the state restrictions and further affect operations.

He noted that that’s what happened in March, when the pandemic first set in and California enacted its initial shutdown.

Drayton couldn’t be reached immediately late Friday for comment on the orders issued by the five Bay Area counties and their ramifications for cannabis businesses.

“To preempt any sort of local intervention, we would like to see the industry start to reach out to their local officials, to continue the dialogue,” Drayton said earlier in the day.

Kiloh expects a drop in storefront sales because of the 20% customer capacity restriction.

“We’ll definitely see a decline in sales, with people not being able to come in and make purchases,” he said. “We’ll have to go back to curbside delivery, online order pickups and not have a lot of people inside your building.

“That’s how everyone is. Even grocery stores are going to have to limit their occupancies.”

Drayton expressed optimism, however, because marijuana businesses were able to find “workarounds” during the first shutdown in the spring.

“What the cannabis industry has shown is we might not be recession-proof,” he said, “but we’re recession-resilient.”