Can Aurora Cannabis Stock Breakout Over $10?

The cannabis space has been volatile lately, but that’s not surprising to those who observe it. Shares like Aurora Cannabis (NYSE:ACB) go through periods of volatility as well as quiet lulls that catch investors off-guard. ACB stock is going through such a lull right now, but is it about it perk up? 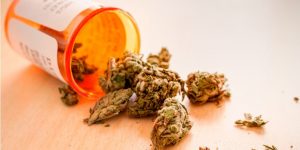 Last week, the company missed on earnings and revenue estimates. Normally that’s a pretty big no-no on Wall Street. But so far, Aurora stock isn’t exactly paying the price. ACB stock is flat since the report while the 39-stock ETFMG Alternative Harvest ETF (NYSEArca:MJ) is off less than 1%. Aurora stock is the fund’s second-largest holding, behind Cronos Group (NASDAQ:CRON).

Initially, ACB stock opened lower by ~3% on May 15 following fiscal third-quarter results. By the end of the day, shares were almost 10% higher. While total revenue of CAD $65 million ($48.3 million) missed estimates by CAD $2.35 million, sales surged more than 300% year-over-year. Cannabis-specific revenue grew more than 440% to CAD $58.7 million. A loss of CAD 16 cents per share also missed estimates by 6 cents per share.

Still, investors were willing to give ACB stock the benefit of the doubt when they saw that revenue growth. For the fourth quarter, analysts are looking for revenue growth of almost 500% to $88 million. This is some massive growth, which is why the cannabis space has generated so much interest among investors.

Is That Attention Warranted?

The current year revenue may not warrant the valuations, but the attention is warranted by the price action alone. Plus, we all know that the cannabis space is lucrative from a long-term perspective assuming lawmakers continue forward with an open mind.

Even ignoring the numerous potential regulatory risks, many investors (myself included) are struggling to come to terms with the valuations. ACB stock has an $8.8 billion market cap and just turned in a quarterly report with $65 million in sales. Even with 500% growth next quarter, $88 million in sales is pretty small time for a company this big.

That hasn’t stopped even larger players from getting in on the land grab, though. Altria (NYSE:MO) sank $1.8 billion in Cronos, while Constellation Brands (NYSE:STZ) has invested billions into Canopy. That warrants attention too.

The appetite for the so-called pot stocks is obvious: Big companies are making billion-dollar investments and we surely haven’t seen the last of them. They are thinking long term because, even though the valuations don’t make sense today, many are banking on triple-digit growth rates bringing those valuation into a more reasonable level down the road. 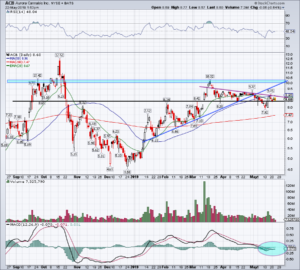 What does that mean for cannabis stocks though? One would assume it greatly limits the upside. But so far, many of them continue to digest relatively well. Take ACB stock for example.

The stock was in a rising wedge for the first few months of 2019, before exploding from $8 to $10.32 in a matter of days. ACB stock has since pulled back from those highs, mostly chopping around $9 for the past two months. In other words, the big volatile move up was followed by a period of lull, just as we discussed at the top of this article.

It brings up the obvious question though: Now what?

Support at $8.50 is holding steady for ACB stock. Worth pointing out is that the 50% retracement for the one-year range is at $8.55. Former uptrend support (blue line) gave way earlier this month, while downtrend resistance (purple line) continues to squeeze Aurora stock lower.

For bulls, they need to see $8.50 hold as support and for ACB stock to breakout over downtrend resistance. This would require a move over $9 — hurdling the 50-day in the process — and allow a larger rally to occur. My upside targets would include the 61.8% retracement at $9.49 and then the 2019 highs near $10.30.

Should downtrend resistance push ACB stock below support, look to see that $8 (this month’s low) and ~$7.50 hold as support. Not only can the 200-day moving average be found near the latter mark, but the 38.2% retracement is at $7.61.

Bret Kenwell is the manager and author of Future Blue Chips and is on Twitter @BretKenwell. As of this writing, Kenwell held no positions in any aforementioned securities.