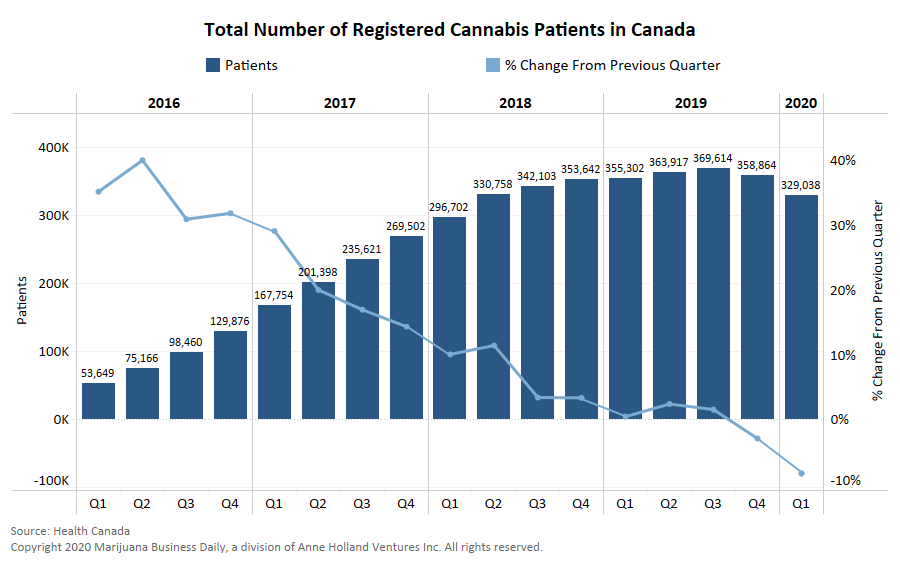 The number of active medical marijuana patients in Canada appears to have leveled off about a year after adult-use cannabis was legalized in the fourth quarter of 2018, but industry experts say it is too early to write off the market.

According to the latest data from Health Canada, 329,038 medical cannabis patients were registered as clients with a federally licensed producer as of March 2020.

Still, it’s not the significant drop that some market watchers predicted.

A breakdown by province tells a more nuanced story:

Why is the number of medical patients posting robust growth in some provinces but falling in others?

One factor could be the slow rollout of recreational cannabis stores in Quebec, Ontario and, until recently, British Columbia.

Alberta saw the biggest decline in active medical registrations between legalization and this year.

Alberta’s medical market experienced a 33.2% decline in active medical cannabis registrations, to 73,629, after recreational cannabis was legalized and regulated.

It is also the only province to surpass the one-store-per-10,000-person threshold – considered a general benchmark for successful store distribution.

Alberta has about 1.13 adult-use cannabis stores per 10,000 people, by far the most in the country.

In Canada, patients can grow their own medical marijuana or have it grown by a designated person, provided they have the appropriate federal approval.

Or the medicine can be ordered from one of the country’s federally licensed producers for mail delivery.

One of the issues for registered patients is an excise tax levied by the federal government on medical cannabis, although some companies cover that expense for their patients.

The CEO of the Saskatchewan-based company highlighted two avenues, including:

“The medical market may have plateaued for now, but I don’t think it’s necessarily done. I’m of the conviction this is going to be a significant adjustment in how we treat things like chronic pain and depression,” he said in a phone interview.

Zyus has conducted three preclinical trials to determine the impact of cannabis derivatives on mental and neurological health conditions, and 20 more are in the works.

“We won’t get there unless we invest in the science, and that’s really the bottom line.” he said.

Zettl said the medical market suffered recently because some Canadian producers “just wanted to be big.”

“In the case of a few of our competitors, they just wanted to be big – be the biggest. That’s not much of a vision.”

That ultimately distracted those businesses from servicing their medical clients.

“Some of our competitors, their badge of honor when they put a new medical cannabis flower on the marketplace – their sign of success – is when they are out of product in two weeks. They were celebrating that,” he said, declining to name names.

“How can a patient rely on a product when they’re out of it?”

Alberta-based Aurora Cannabis continues to be a leader with 86,674 active registered patients as of March 31, 2020, down from 90,307 the previous quarter.

New Brunswick-headquartered Organigram’s active patient count fell to 14,312 in a recent quarter from 17,000 patients in the previous period.

Most of the other large companies do not disclose up-to-date figures on their active medical marijuana registrations – a deviation from precedent.

A spokeswoman for British Columbia-based Tilray told Marijuana Business Daily, “We don’t disclose this figure and haven’t for some time.”

Ontario producer Aphria said it has not disclosed the number of active patients.

Canopy Growth, at one time the market leader in Canada, said the Ontario company doesn’t “have a more up-to-date number” than the one provided in a regulatory filing more than one year ago.

Niagara-based CannTrust had as many as 67,000 active registered patients one year ago before running into regulatory and legal problems that forced the company to suspend production.

The Kitchener-Waterloo market can expect a busy fall season