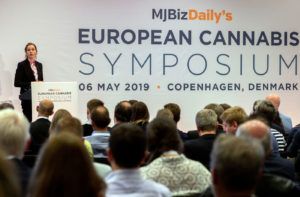 In an interview with Marijuana Business Daily on the sidelines of the European Cannabis Symposium in Copenhagen, Nørby said regulations and legislation for medical marijuana in Denmark and across Europe should be streamlined for the benefit of patients and businesses.

Changes are already in the works in the respective Danish and European parliaments.

“We have already changed the legislation twice, in order to allow bulk exports. We didn’t foresee that in the beginning.”

One change around the corner is a sunset clause that will terminate the ability of Canadian producers to export medical cannabis into Denmark with Canadian-approved pesticides.

Medical marijuana products imported into Denmark will also need to be produced at an EU-Good Manufacturing Practice-certified location, something not currently required.

Danish and international companies expect to start shipping locally produced medical cannabis in the coming months, which will increase product supply and lower prices – and ultimately will be a boon for the local market.

“We believe that within hopefully a few months or half a year, we’ll have Danish products also on the shelves,” Nørby said. “We do think there will be much more competition, which will drive down prices, and then there will be a greater number of products to choose from.

“The way to move forward for Denmark is to provide businesses with good conditions to participate in the scheme.”

Through the end of April, 2,104 individual patients had been prescribed medical cannabis since the program was launched in January 2018, much higher than the 500 patients that the Danish Medicines Authority originally expected to participate in the program.

Nørby also would like to see clarity and consistency on regulations and laws related to medical CBD across the European Union.

Denmark has asked all European countries to provide their legislation and regulations related to the cannabinoid, but many countries so far failed to answer the request.

“And the thing is, we have a free internal market in the EU. But we can see that many European countries have CBD oils on pharmacy shelves, but they do not have legislation,” Nørby said.

“If you have countries that do not have legislation – or just do not follow the legislation that they have in the country – you put patients and you put producers and consumers in a very difficult situation.”

In February, the World Health Organization (WHO) recommended that pure CBD and CBD preparations containing no more than 0.2% THC not be included in any way in the international drug control conventions.

The United Nations Commission on Narcotic Drugs did not vote on the WHO recommendations at its March session in Vienna – leaving it for possible consideration at its next meeting.