In financial markets, there are certain price levels that are more significant than others. Levels with important amounts of supply and demand. In addition, prices are always doing one of three things.  They are either going up, going down or staying the same. When understood and applied correctly, technical analysis is an illustration of these dynamics. This can lead to profits!

But technical analysis has a bad reputation and I can understand why. Most technical analysts do not seem to understand the basics. To make matters worse, some analysts even think that there is validity in esoteric techniques such like Fibonacci Levels and Elliot Waves.

These methods are in the realm of the UFOs and Bigfoot. They are fun to talk about, but are not real. Professional institutional traders do not pay attention to them.

I know what the pros do care about. As someone who traded in the hedge fund world for a long time, I can tell you that we watch important support and resistance levels, trends, and momentum.

Let’s take a look at some of the supply and demand dynamics that are occurring in the marijuana stocks. Knowing where the important levels and trends are can help can help you decide what levels to place your buy and sell orders at and whether you should use market or limit orders. 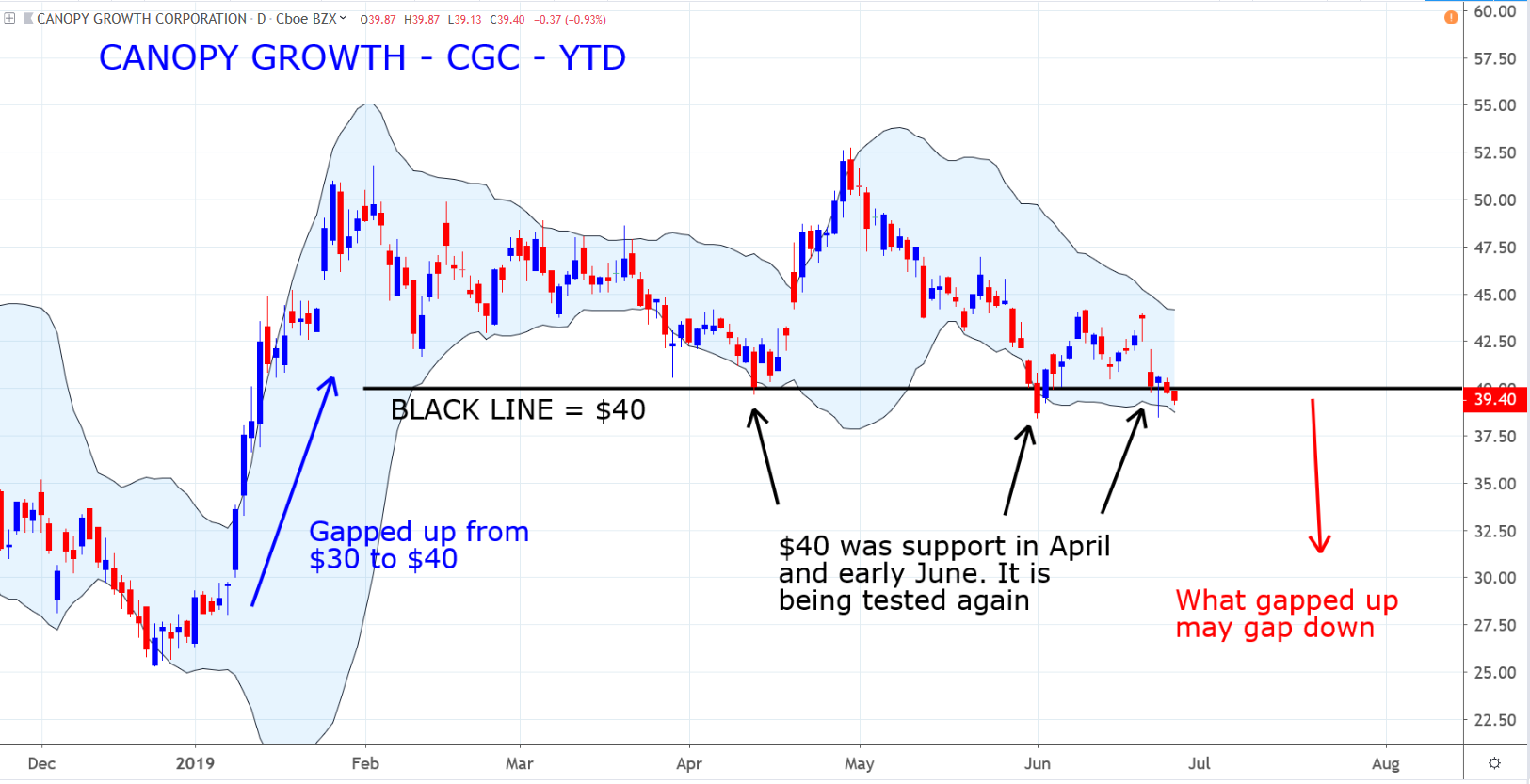 CGC may be setting up for a big move lower. The $40 level was recently tested. This level was support in April and again in early June. If it breaks, and I think it will, we could see a significant move lower. That is because there is no clear support until we get down to around the $30 level.

Early in the year, CGC gapped up from $30 to $40. When a stock gaps up like that, it doesn’t spend much time trading at the levels that it gapped through. Because of this, there isn’t time for meaningful support to form. This means that when the stock trades back down into these levels, is can gap right back through. 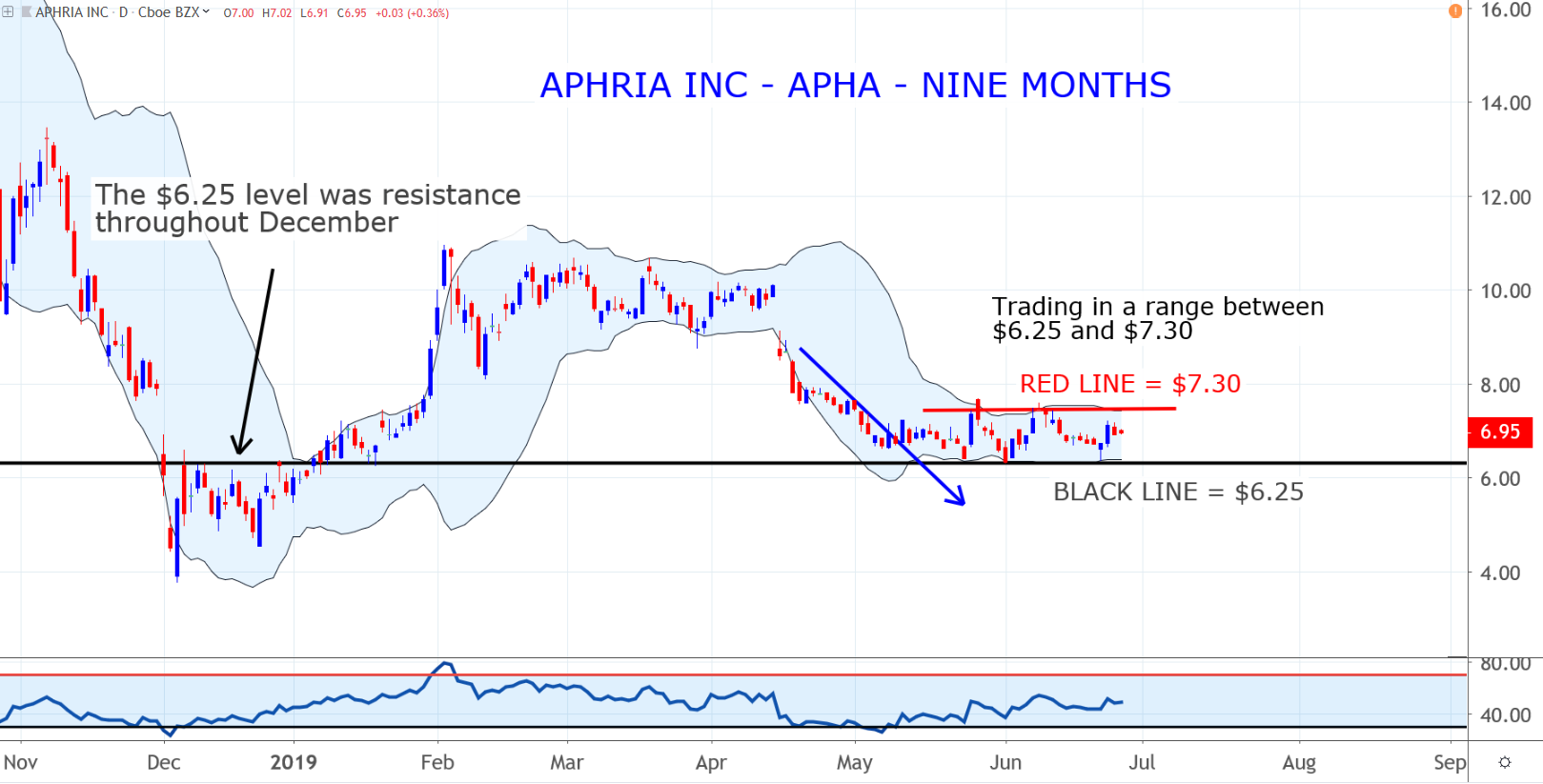 Over the past month APHA has been trading between support around the $6.25 level and resistance around the $7.30 level.

There is support around $6.25 because it was resistance in December. Resistance becomes support because some of those who sold at a level get upset when the stock trades above the level that they sold it at. They believe selling it was a mistake. They tell themselves that if the stock comes back down to the level they sold it at, they will buy it back.

Those who shorted it at the resistance level are losing money now that the stock is higher. They tell themselves that if it comes back down to that level, they will buy it back to cover their shorts at breakeven.

Those who bought it at the resistance level wish they had more after it goes higher. They tell themselves that if it comes back down, they will buy more. Now there are three groups that are interested in buying it at the level. This is how support forms. 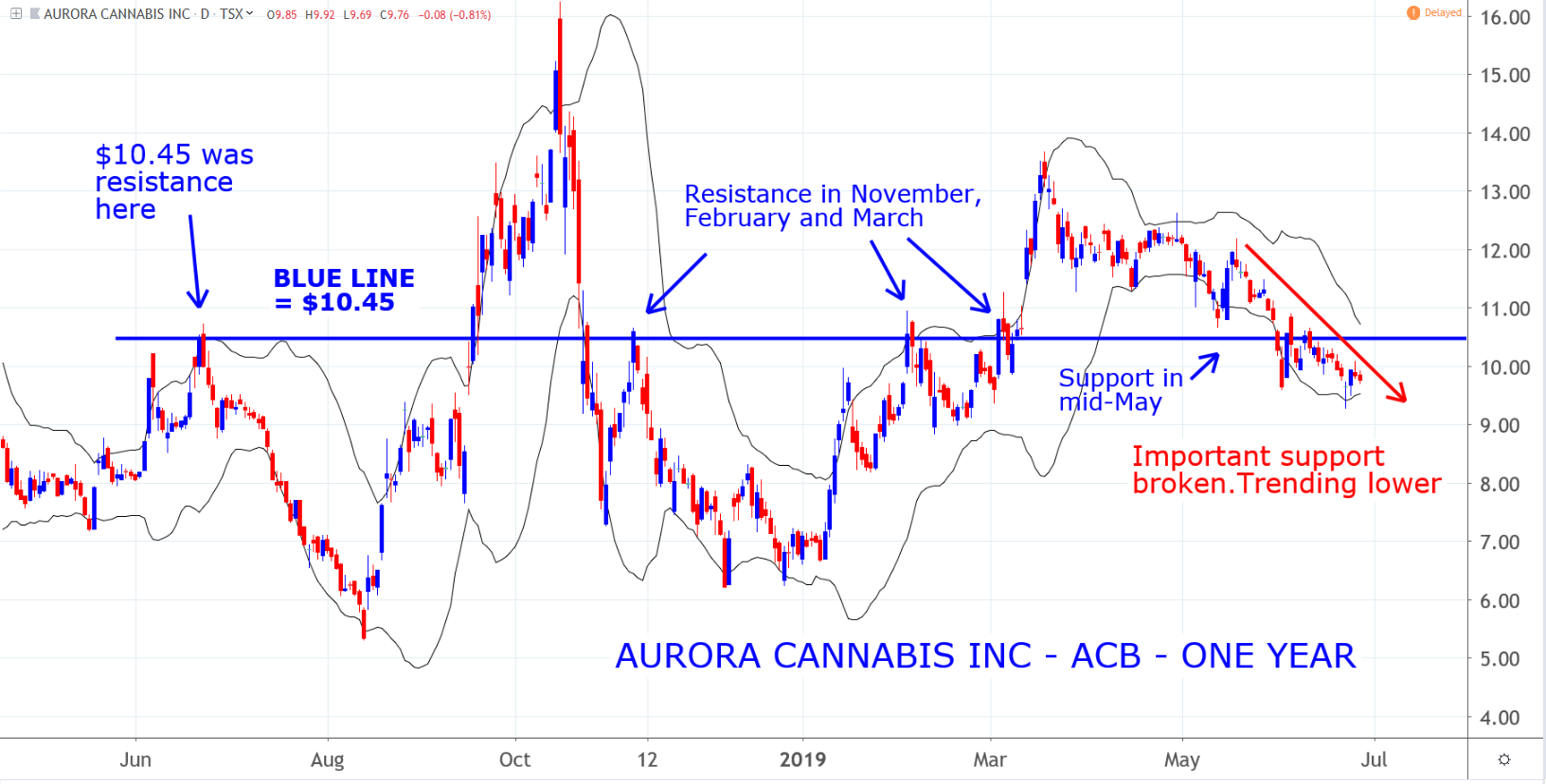 ACB continues to trend lower after breaking support at the important $10.45 level (illustrated by the red line).  This level was resistance in June of last year. It was resistance again last November, February and March. Then it was support throughout May before the ACB stock price finally broke it on the last day of the month. Since then $10.45 has become a resistance level again.

There seems to be a great amount of misunderstanding of trendlines. I even recently saw a well-known technical analyst say that trendlines will stop being drawn in the future.

This analyst doesn’t understand trendlines. Of course, drawing a trendline is an art and not a science and it does take some experience to get good at it. But trendline analysis is valid and potentially very profitable.

When a correctly drawn trendline is broken, all it means is that the forces of supply and demand may be equalizing. 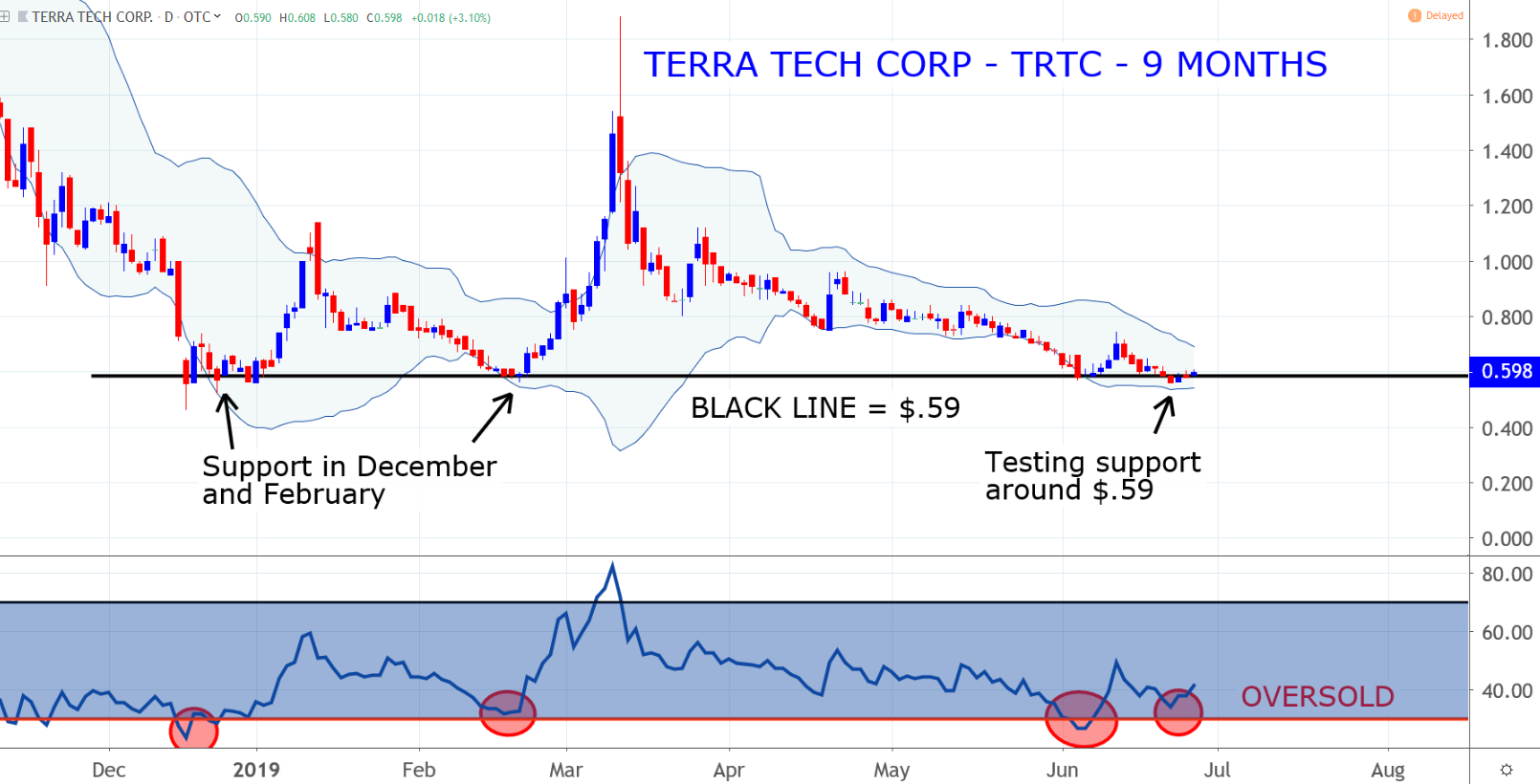 Terra Tech (OTCMKTS:TRTC) is a holding company. It engages in the cultivation and production of medical marijuana. And you don’t need to be a Market Guru to see that the levels around 60 cents are important to TRTC. They were clear support in December and February. They were also support in early June.

As you can see on the chart, each of those times that the stock got to these levels it was oversold and subsequently rebounded. That is an important dynamic to understand — not just here but with all stocks.

What does “oversold” mean? It is a measure of momentum. It is simply the price of something today verses where the price was X many days ago. When this difference gets to extremes, traders call it “oversold” or “overbought.”

In this case, TRTC is still oversold, but not as much as the prior times. I would guess that it either rallies over the next few days, or consolidates and becomes not oversold and eventually heads lower. 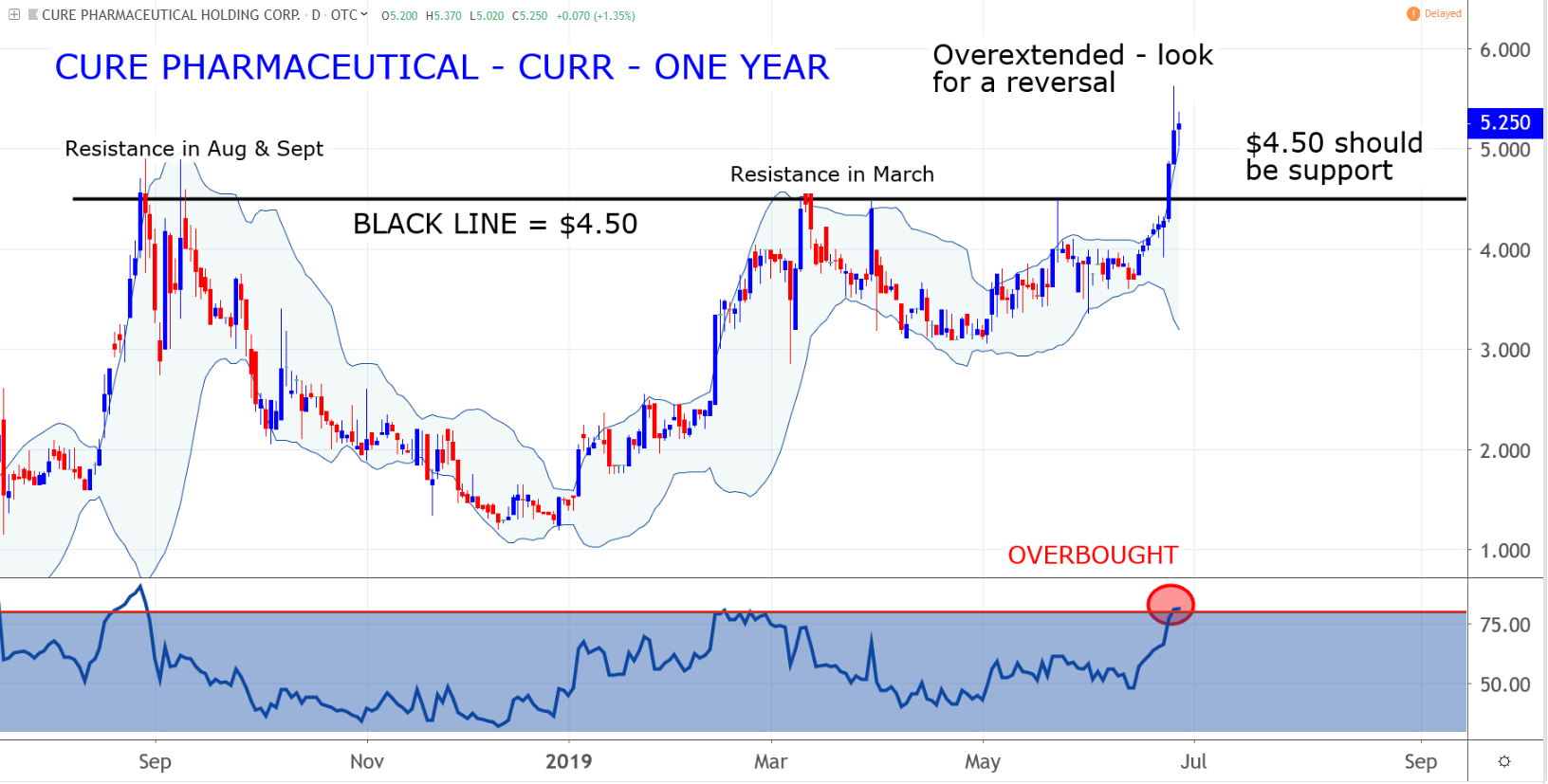 CURR is extremely overbought and overextended. If it goes lower, there will probably be support around the $4.50 level. This level was resistance during last August and September and then again in March.

The key here is to look for a reversal pattern in the stock. What is a “reversal pattern?” It is simply a graphical illustration that leadership in the market is changing from demand to supply or vice-versa. For example, suppose on a Tuesday the forces of demand control a market. The stock opens, and then buyers take higher all day and the close is near the day’s highs. This is a blue candlestick on the chart.

Then suppose the next day the stock opens and the forces of supply take over and drive it lower. It closes near the lows of the day. This will be a red candlestick.

Put together, these two days may show a reversal pattern. They illustrate that the forces of supply are now overpowering the forces of demand and there is a good chance that the stock will trend lower. 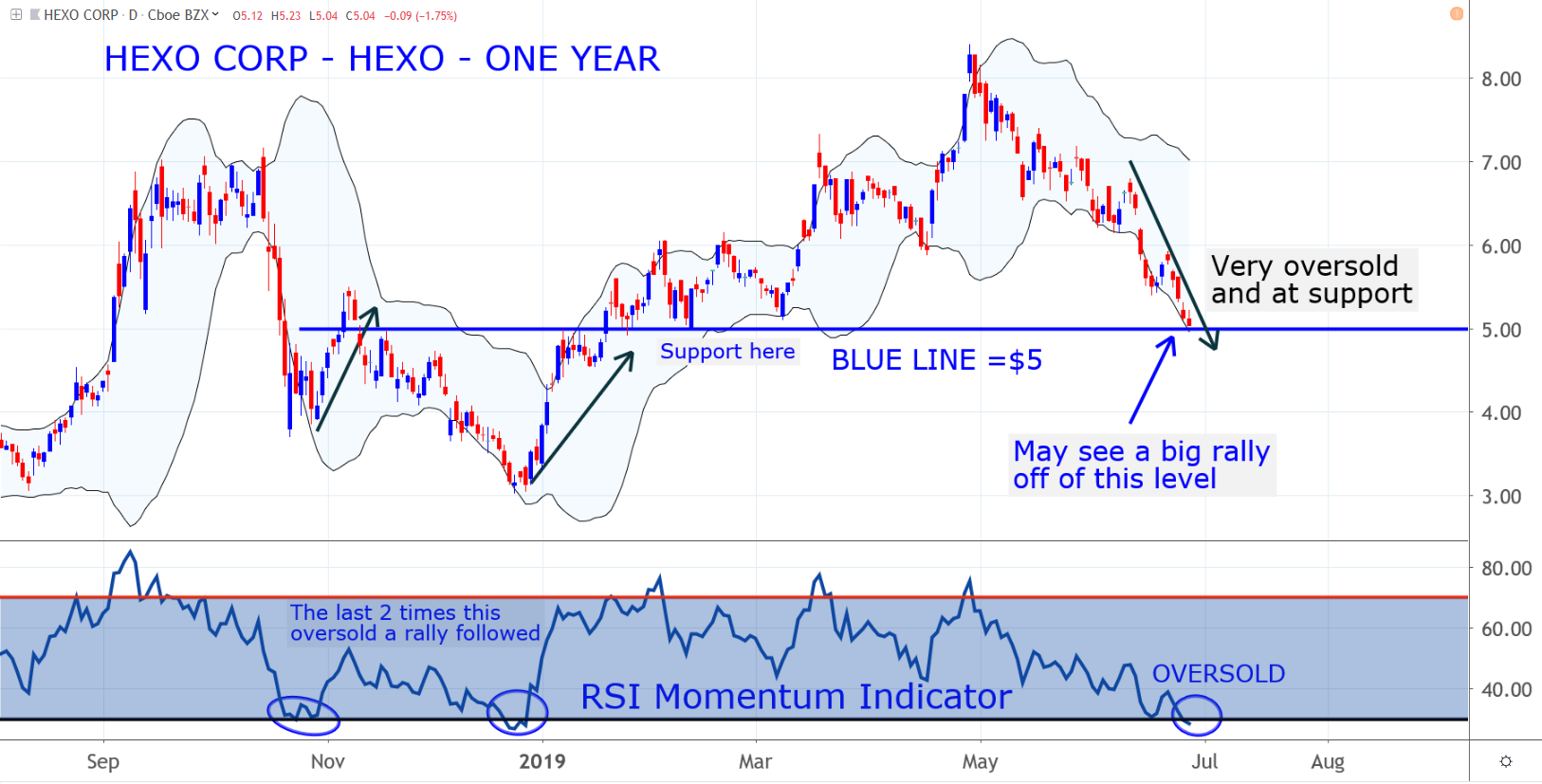 Hexo (NYSE:HEXO) grows and sells medical marijuana. It is also at an interesting inflection point, and I am watching it for a potential low risk buy.

As you can see, it is testing support at the $5 level. This level was also support in February and March. There is support at this level because in addition to being important psychologically, it was resistance in November.

The last two times that HEXO was this oversold, in October and December, a significant rally followed.

So we have a stock that is extremely oversold and at important support. If it breaks the downtrend, there is a good chance that it will rally again. This is why I may buy it. 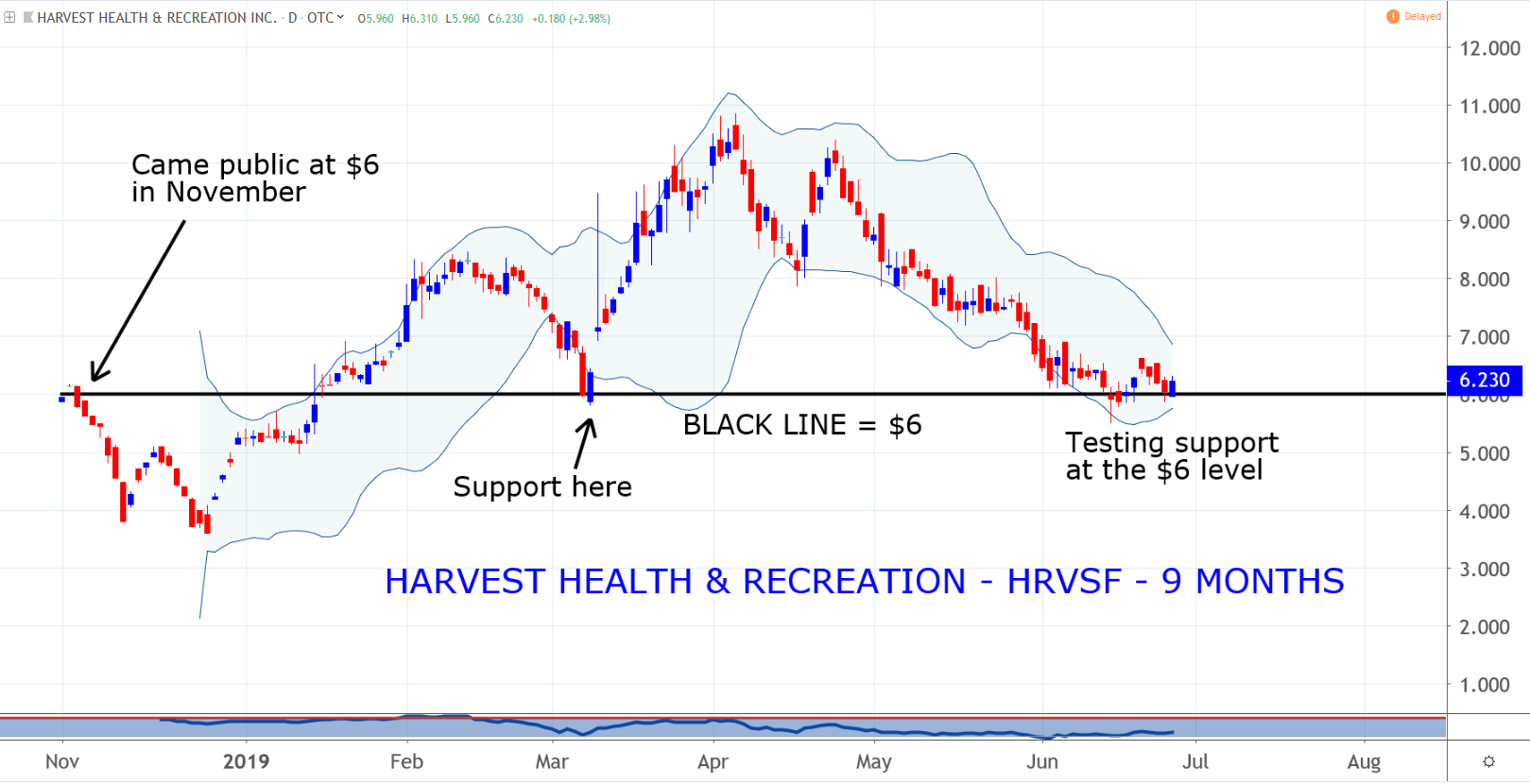 Harvest Health & Recreation (OTCMKTS:HRVSF) considers itself “one of the first consistently profitable, vertically integrated cannabis companies with one of the largest footprints in the U.S.” I wanted to show you this stock because I think there is some stabilization going on here.

As you can see, last November HRVSF went public at $6 per share. It initially traded lower, which means that someone who was allocated shares in the IPO decided to dump their shares.

When they were done, the stock traded back above the IPO price and went higher.

As you can see, the $6 level — the level that it came public at — is now support. This could mean that HRVSF is a low-risk buy because there is a floor in the price at $6.

As of the this time of this writing, Mark Putrino did not hold any positions in the aforementioned securities.