If you’ve been thinking about adding more gold positions to hedge your portfolio, you might want to think about also buying some silver.

That was the advice our macro investing expert, Eric Fry, offered to subscribers back on May 12.

What has silver done since then?

As you can see below, silver has returned 29% — more than 4X gold’s return of 7% over the same period. 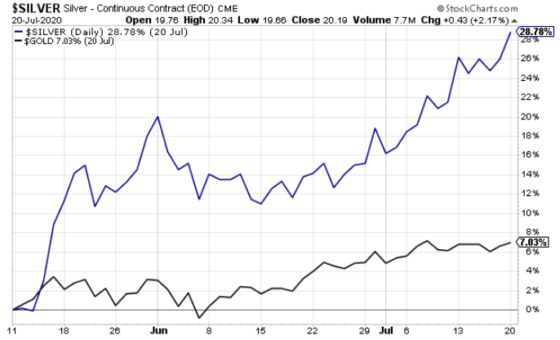 That 29% gain also handily beats the S&P’s 11% return over this time-frame.

In Eric’s May update, he recommended two silver plays. As I write, the first is up 28%, which approximates silver’s gain. The second is more than doubling that return, up 61%.

So, where is silver today? Is it still offering investors an attractive risk-reward set-up?

That impressive recent gain is what I would call a “good start.” I expect silver to continue outperforming gold, as the bull market in precious metals continues to gain momentum.

But don’t get me wrong … I’m also looking for gold to shine brightly — just not as brightly as silver.

Today, let’s dig deeper into the case for silver, and why precious metals investors might benefit from looking beyond just gold.

Two weeks ago, we featured gold here in the Digest. In making the case for more gains to come, we noted how gold’s market value rises or falls based primarily on one thing …

In other words, investors rotate in and out of gold based on how they feel. This is because gold doesn’t offer cash flows, dividends, or earnings that enable investors to value it as they might a stock. Instead, investors are left with feelings, and the related bullish or bearish momentum accompanying those feelings.

Given this, as gold gains positive momentum and enjoys a surge in value, it attracts more investors who want these gains. Those new investment dollars push gold prices even higher, attracting even more investors. And so on and so on … It’s a positive snowball effect.

It works the same with silver.

We can see this snowball effect by looking at the cumulative value of the metal held in gold and silver exchange-traded funds. (These ETFs adjust the amount of physical gold and silver they hold to parallel investor demand).

In the chart below from Eric’s update, you can see the rising value of both gold and silver ETFs in recent years. It reflects both market prices and quantities of the precious metals. 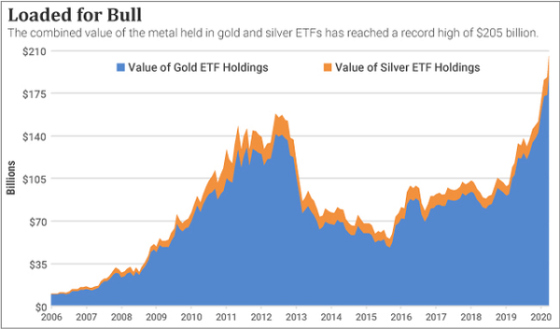 Here’s Eric for more on what to make of this:

Whenever the combined quantity of silver inside all the silver ETFs increased by 20% or more over a six-month time frame, the silver price soared:

Investment flows into both precious metals remain strong and sustained. For eight straight months, gold ETFs have attracted net investment inflows, and their combined holdings of gold bullion over this time frame have jumped 27%.

And what’s good for gold is often great for silver.

For six straight months, silver ETFs have attracted net investment inflows, and their combined holdings of silver bullion over this time frame have soared 34%.

***Why the silver gains could accelerate even faster from here

Since gold and silver provide no intrinsic cash flows, one of the ways investors value them is by comparing their prices to one another. The official (uninspired) name for this is the “gold-silver ratio.”

The idea is simple — take the long-term average of the ratio of their prices (how many ounces of silver is needed to buy an ounce of gold). Then, evaluate how the current gold-silver ratio compares to this long-term average.

Since readings tend to mean-revert over time, investors look to this ratio for clues about which precious metal is likely to “catch up” to the other in price.

Now, from April through the beginning of this month, the gold-silver ratio dropped 20%. That’s a big decrease for such a short period of time.

This falling ratio suggests that silver’s price is climbing faster than gold’s price.

And in fact, that’s what we find.

Below, we compare silver and gold since April 1. While gold is up 14%, silver has tripled those returns, up 43%. 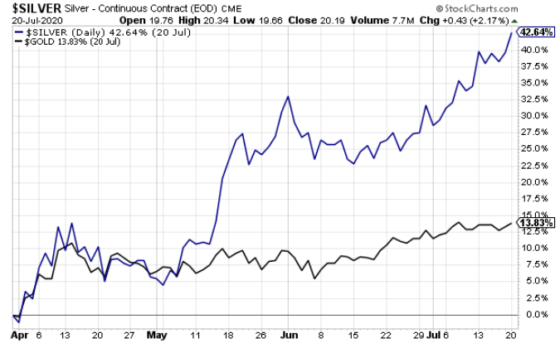 Okay, so silver is climbing faster than gold. So, what? Where are these two metals right now in terms of their traditional price-relationship? And what does that mean for silver prices going forward?

To begin answering that, let’s start with the historic gold-silver ratio sweet spot.

So, we see a skew upward over the decades. But let’s just say the ratio is roughly 55:1 and call it a day.

Given this, any readings above 55 would suggest that silver’s price would need to “catch up” to gold’s price if the market was going to maintain its loose historic relationship.

We can also say that the higher the value of the gold-silver ratio, the more catch-up silver would have to do.

Well, in April, it was at 114. That’s an extreme level — the highest on the chart I’ll show you in a moment.

The latest reading (after the 20% decline in the gold-silver ratio we noted above) is 91 — still very high.

Let’s look at this visually to make it easier to grasp.

Despite this move, you’ll see that the ratio is still at nosebleed levels. 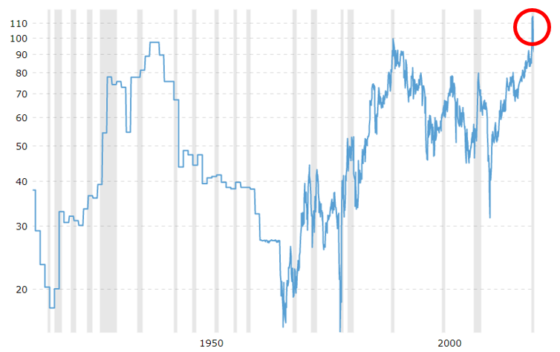 So, that 20% decline in the ratio, which coincides with silver’s price racing faster than gold’s? Well, that could be just the beginning of an even bigger move if this gold-silver ratio continues to drop as it’s now doing.

If past is prologue, the silver price will continue gaining momentum and deliver even larger gains than gold …

… if the silver price traded back up to its average level, relative to gold, it would be selling for $35.50 an ounce — or 84% above today’s price.

That hypothetical gain assumes no increase in the gold price. But obviously, if the gold price continues chugging higher, the silver price would have to climb even higher to reach its average level on the gold-silver ratio.

Silver’s connection to gold is not a Law of the Financial Universe; it is simply a tendency that manifests itself over time. But I believe the time has come for that tendency to manifest itself once again …

I would remind readers that the long-term case for gold gains — most notably, the massive global currency debasement happening today as governments try to fight the coronavirus — applies to silver as well.

***How is Eric recommending investors play a potential leg higher in silver?

Eric still likes the same two silver recommendations he made in April (which we highlighted at the top of this Digest as up 28% and 61%, respectfully).

I would reiterate the silver plays I showed you in this space two months ago — the iShares Silver Trust (SLV) and the ProShares Ultra Silver ETF (AGQ).

SLV … is the most direct way to participate in any future silver rally. Because this $10 billion ETF is a proxy for physical silver, its share price tracks the silver price nearly tick-for-tick.

Alternatively, traders who want to take on additional risk could buy AGQ, which uses leverage to produce double the returns of silver, for better or worse.

But remember, silver is a speculation. So buckle up and prepare for a gut-wrenching yet exhilarating ride.

We’ll keep you updated here in the Digest.