CSX Corporation (NASDAQ:CSX) has seen positive stock momentum so far in 2019, with the stock having moved higher by 24% to current levels north of $77. But while the stock has outperformed the S&P 500 index for the first half of 2019, there are compelling reasons to be cautious on the stock in the coming quarters. 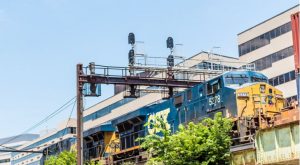 So let’s discuss the key factors that can potentially translate into a stock correction for CSX Corporation in the next 3-6 months.

I further believe that any steep correction would be a good opportunity to consider adding to your exposure to this fundamentally strong stock.

For a company that is in the business of rail-based transportation services, there is a relatively high positive correlation between GDP growth and the company’s performance.

It is therefore clear that relatively sluggish economic activity will have a negative impact on rail-based transportation services and I believe the coming quarters can be potentially weaker in terms of volumes.

Another reason to be cautious on CSX Corporation is that the stock is fairly valued as compared to its peers. I believe a potential correction in the next 3-6 months will present an opportunity for long-term investors to accumulate the stock.

With the economic factors discussed, the valuation is likely to adjust on the downside and translate into stock correction in the foreseeable future.

Looking Beyond The Downside

While I hold a neutral to negative view due to economic factors that are likely to be discounted in the stock price in the coming quarters, I am bullish on CSX Corporation as a quality stock with robust cash flows.

Purely from a business model perspective, CSX Corporation is well positioned and has a well-diversified revenue base. While merchandising, coal and intermodal are the broad revenue segments, it is worth noting that within the merchandising segment, the company has witnessed strong volume growth (1Q19) related to agriculture & food products, forest products and minerals.

The sub-segment of forest products and minerals is likely to witness decline in volumes if GDP growth decelerates. However, these core economic segments will continue to deliver once economic activity bounces back.

CSX Corporation is fairly valued as compared to peers after the upside so far in 2019. The company has reiterated low-single-digit revenue growth for 2019 and it is likely that revenue growth will be muted amidst weak economic activity.

However, CSX stock has a well diversified source of revenue and the company has reported robust growth in free cash flows. With strong fundamentals, prospects of dividend growth and continued value creation through buybacks, CSX Corporation is worth considering on any potential correction.

As of this writing, Faisal Humayun did not hold a position in any of the aforementioned securities.

To Boost GOOGL Stock, Alphabet Must Get Out of Its Own Way