John Jagerson walks us through the numbers surrounding Friday’s jobs report. What historical data suggests the market will do over the next 30 days

The stock market doesn’t always have the greatest amount of maturity.

At times, it acts like a 3rd grader with an unhealthy obsession on, say, dessert. In this case, “dessert” is increasingly-higher stock prices at the expense of everything else.

Any news or data that might negatively impact that outcome is considered “bad” — even if the news is actually positive for the broader economy.

You try to offer your 3rd grader a healthy bite of broccoli, which would obviously benefit the rest of him beyond his taste buds, but he throws a fit. Dessert or nothing!

Last Friday, the market threw its own fit … because it received good news painting the picture of a healthy economy.

But that positive news was interpreted as a threat to what the market is fixating on — higher stock prices.

Why would a great jobs report jeopardize higher stock prices?

Because a strong job report calls into question the need for the Fed to cut rates in July, as the market has been anticipating (the market loves lower rates). After all, with the economy posting such a healthy number, why does the Fed need to goose it further?

With this question as our backdrop, today we turn to John Jagerson of Strategic Trader. Regular Digest readers know John as one the smartest quant investors in the business.

Being a “quant” simply means John uses real, historical market data to identify patterns and trends. Then he uses that information to help make well-informed predictions as to what might happen in the markets going forward.

For example, in mid-May, after a huge down day in the market when things looked especially bearish, John ran a study of past similar situations. Based on that study, he forecasted that the market would actually be up at least 5% come 30 days later. It turns out, we needed an extra week, but 37 days later, the market was up 5.5%.

So, in today’s Digest, let’s get John’s thoughts on the labor report, what it could mean for the Fed’s July meeting, and the market’s direction over the coming month.

***Diving into the labor report and its implications for the market

John: Well, if you ignore the hyperbolic headlines (Friday) morning, it wasn’t that big of a report. This is the 5th highest report over the last 12 months, so it’s good but I wouldn’t call it a blow-out. I had suggested last month that the extremely low numbers for May could trigger a reversion to the mean with bigger numbers this month due to seasonal/statistical adjustments. That’s what happened in the March and April reports as well.

Jeff: As we’re talking, it’s late morning Friday, and the markets are selling off on this positive news. What do you make of this?

John: The market is always squirrely on “Labor Fridays” so although I expected good news to be good for prices — and bad news to be good as well because it motivates the Fed to cut rates — I’m not shocked that investors are a bit bearish today. In fact, today’s selling started before the BLS report when German manufacturing orders were reported with a massive -2.2% drop. That’s really bad news for European indexes and it was bleeding over into U.S. equities before the labor report was released.

Jeff: With your quant background, let’s turn to the numbers now. Given similar strong jobs reports in the past, what might be expect from the market over the coming 30 days?

John: I’ve run the numbers, and over the last 10 years, a positive surprise was followed by higher prices in the S&P 500 30-days later over 70% of the time.

Interestingly, when the Fed is easing and cutting rates, a negative surprise also leads to positive 30-day returns 80% of the time, but those highs tend to fade more quickly.

Jeff: So, either way, the market is likely headed up? That seems a little odd to me.

John: Yes, the market usually goes up after labor reports, but that is pretty much true of anything about the stock market. It’s designed on purpose to go up more than it goes down, so it would be a surprise if it were otherwise.

However, when the labor report is below expectations with a big miss and the Fed is NOT lowering rates, the 30-day reaction was close to 50-50, which is poor for the stock market that has a long-term average closer to 60% for any random month.

Jeff: Okay, so we’re looking at a 70% chance of a higher market 30 days from now. But let’s turn to the Fed at this point. Couldn’t they throw a monkey wrench into all this? Doesn’t the strong jobs number make a rate-cut a bit less certain?

John: I don’t think so. The Fed has painted themselves into a corner in July and I can’t see how they can avoid a cut. The market thinks they will almost certainly cut, the Fed’s own economic forecasts released last month indicated two cuts this year. Whether the U.S. employment market needs a cut or not, growth is slowing, so a pre-emptive cut to save the business cycle won’t seem like a crazy idea.

Jeff: Okay, but what if Powell surprises us? Let’s say he looks at this data and decides to hold rates steady in July – do you think the markets would take that in stride?

John: If the market is still pricing in a cut by the time we get to the Fed’s announcement on July 31st then I think not getting that cut would be catastrophic in the short-term for the market. However, if investors have adjusted their expectations and the consensus has flipped to no-cut by the 31st then it’s not going to be an issue. At this point, we can’t really predict the market’s reaction to the Fed in July because we don’t know what traders will have priced in by that time.

NOTE: At the time of this writing, the CME Group’s Fedwatch tool (below) is reporting a 100% expectation for a July rate cut, with a 94.1% expectancy that the cut will be a quarter-point. 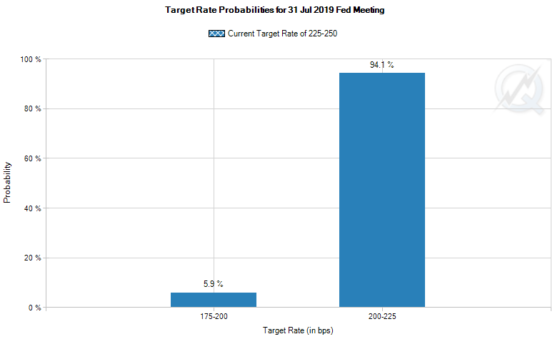 Jeff: Switching gears a bit, what’s your take on Powell? He’s developed a reputation for being a bit tone-deaf on what the market wants. Do you think that’s fair?

John: I think that reputation is undeserved. He is in a weird situation where there is simultaneously a lot of public, political pressure from President Trump that gets a lot of press attention, and market participants have developed new expectations about the Fed’s role in the economy. The Fed doesn’t typically cut rates when as there is “full employment” and “stable prices” which are the Fed’s dual mandate. They aren’t really tasked with maintaining asset prices. I personally think the market’s expectations are out of whack, and there may not be a great explanation for that. The last couple times the Fed cut rates in an economic situation like this it was during an external crisis (Mexican peso crisis 1994-95 & Asian financial crisis 1997-98).

Not to sound too much like a grandpa here, but I know that the majority of folks currently working on Wall Street weren’t even in business school the last time the Fed was raising rates so they really don’t have a lot of real-life experience with it. Maybe the market has just changed and Powell is now part of the “old school” but I still don’t think it changes the fact that the Fed’s job, as chartered by Congress, isn’t to respond to equity markets. The job is about labor and inflation, both of which are doing fine right now.

Jeff: So, a good grade for Powell then.

John: Yes, I think Powell is doing fine. He has talked about ending the use of the Fed’s economic forecasting “dot plot” which I agree with. I think it’s a stupid lagging indicator and just produces more uncertainty rather than less. I learn more towards laissez-faire monetary policy, so I would like the Fed to be a bit slower to take action and less of an active market participant.

***Wrapping up, we’re looking at a 70% chance of a higher market in 30 days, and John suggests we’re still in for a July rate-cut despite the strong jobs number

By the way, we’ve been tracking John’s Strategic Trader win-streak here in the Digest. It’s currently sitting at 92-of-92 closed, profitable put-write trades, featuring an average annualized return of roughly 48%.

If you’re interested in taking part in these trades with John and his partner, Wade, but are new to options, no problem. In Strategic Trader, John and Wade teach subscribers all the basics, then provide simple-to-follow trade guidelines, holding the reader’s hand throughout the entire process. You’ll always know exactly what to do, and when to do it.

If you’re curious, feel free to take the next step and simply learn more by clicking here — no commitment. You risk nothing, but as John and Wade’s track record illustrates, the upside for your portfolio could be substantial.