In advance of important earnings reports coming Thursday from some big-name members of the Dow Jones Industrial Average, the major U.S. equity indexes did a whole lot of nothing Wednesday. 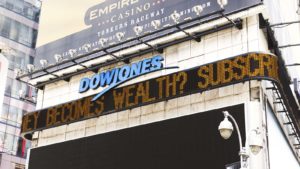 On World Emoji Day, investors probably were not throwing around a lot of smiley emojis. The earnings reports that were out today, though not from members of the Dow Jones Industrial Average, were concerning.

Adding to the concern, at least for industrial stocks, a bellwether sector due to its cyclical nature, was a roughly 10% plunge for railroad operator CSX (NASDAQ:CSX). That’s a tumble that occurred on more than seven times the stock’s average daily volume.

CSX “earned $1.08 in adjusted earnings per share from almost $3.1 billion in sales, about 2% worse than analysts predicted. Weak volumes were to blame. Shipments fell 4% year over year in the second quarter. What’s more, CSX lowered its 2019 sales guidance and now expects revenue to fall about 1% this year,” according to Barron’s.

In what could be an encouraging sign, some of the members of the Dow Jones Industrial Average that report earnings tomorrow were among the index’s better-performing names today. For example, UnitedHealth Group (NYSE:UNH) jumped 0.76%. The managed care provider delivers second-quarter results Thursday before the open of U.S. markets.

Analysts are expecting earnings of $3.45 per share on revenue of $60.6 billion. UNH has endured its share of politically-charged struggles this year, but the shares have been on a torrid pace of late and enter the Thursday earnings report up more than 8% this month.

Much of the story here will revolve around Microsoft’s comments on refreshing existing products, new offerings and the company’s commentary on Azure, its booming cloud business. The stock is up nearly 36% year-to-date, good for one of the best showings among mature, mega-cap technology names.

It wasn’t one of the Dow winners today and it doesn’t report earnings tomorrow, but Caterpillar (NYSE:CAT) is a name worth discussing briefly. As an industrial stock and one of the larger ones at that, Caterpillar slumped 2.39% today, a decline largely tied to the aforementioned glum earnings report from CSX.

Shares of Caterpillar could be boosted by an interest rate cut, any progress on the trade front with China and some market observers note the stock is attractively valued relative to other well-known industrial names.

One more thing to watch: International Business Machines (NYSE:IBM), another member of the Dow Jones Industrial Average, reports earnings after the bell today. The stock fell 0.31% in advance of that report. Wall Street is expecting earnings of $3.07 per share on revenue of $19.16 billion.

In the good news category, this earnings season may prove to be better than previously expected if the reports revealed prior to Wednesday are accurate indicators.

“The earnings season began this week, with 43 S&P 500 companies reporting as of Wednesday morning, and a whopping 84% beating analysts’ estimates,” according to CNBC.

Analysts were expecting an earnings contraction, but the reports to date indicate the S&P 500 will likely see a modest uptick in second-quarter profits.

The 3 Best Medical Marijuana Stocks to Buy for Pot Investors