A batch of solid earnings reports from some marquee companies pushed the major U.S. equity benchmarks to record highs today, an ascent aided by news that President Donald Trump and Congressional Democrats reached a budget agreement. 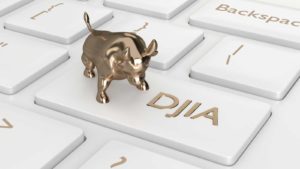 Stocks were also buoyed by President Trump’s Monday decision to expedite licensing decisions for U.S. technology companies doing business with controversial Chinese telecom firm Huawei Technologies. That decision was made after the president met with a group of tech CEOs.

“The CEOs expressed strong support of the president’s policies, including national security restrictions on United States telecom equipment purchases and sales to Huawei,” the White House said. “They requested timely licensing decisions from the Department of Commerce, and the president agreed. The group was also optimistic about United States 5G innovation and deployments.”

There was one concerning economic data point out today. The National Association of Realtors (NAR) said existing home sales dropped 1.7% last month to an annual rate of 5.27 million units as rising prices forced some buyers out of the market.

As we have been discussing in this space, this week is chock-full of bellwether earnings reports. That certainly got the ball rolling in earnest with help from several members of the Dow Jones Industrial Average.

Shares of Coca-Cola (NYSE:KO) surged 6.07% on volume that was nearly double the daily average. KO reached the highest levels in more than 50 years after the company said it expects to post organic sales growth of 5% this year, up from a prior estimate of 4% growth.

The company posted second-quarter revenue of $10 billion, just ahead of the Wall Street estimate of $9.99 billion. Coca-Cola was by far the best-performing stock in the Dow today.

“Our strategy to transform as a total beverage company has allowed us to continue to win in a growing and vibrant industry,” said CEO James Quincey in a statement. “Our progress is positioning the company to create more value for all of our stakeholders, including our shareowners.”

Shares of United Technologies (NYSE:UTX) gained 1.50%, potentially setting the stage for more enthusiasm for aerospace earnings reports, of which plenty more are coming this week. United Technologies said its second-quarter profit jumped to $2.20 a share on sales of $19.6 billion.

More importantly, the industrial company served up its second batch of positive earnings guidance this year, likely accounting for much of the move in the stock today.

Chemicals maker Dow Inc. (NYSE:DOW) was another Dow winner today, jumping 3.42% ahead of its Thursday earnings report and adding to its recent hot streak. Analysts are expecting earnings of 86 cents a share on sales of $11.3 billion.

The theme of positive earnings surprises continued today. Large-cap technology stocks also hit records Tuesday. It should be noted that the widely-followed PHLX Semiconductor Index is higher by over 11% over the past month, indicating that some believe the U.S. and China will come to meaningful terms on trade.

Dow component Intel (NASDAQ:INTC), one of the largest semiconductor makers, reports earnings on July 25 after the close. Intel is one of the smaller Dow members, but its earnings update could go a long way in determining near-term risk appetite. Fortunately, analysts are bullish on chip stocks over the near-term.

“The recent industry group outperformance versus the broad market potential restarts the bullish dynamic that dominated in the first quarter, but we need to see other cyclically sensitive markets follow along to build that confidence,” according to J.P. Morgan.

The Election and Your Stocks