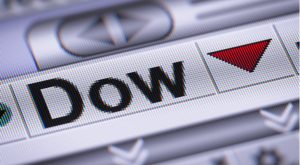 Despite that jobs disappointment, albeit an expected one, stocks rallied to close the week strong, with the Nasdaq Composite and the S&P 500 soaring 1.66% and 1.05%. The Dow Jones Industrial Average closed higher for a fourth consecutive day, adding 1.02%.

Comments from President Donald Trump regarding Mexico potentially avoiding the trade tariffs set to go into effect next week were among the catalysts for stocks today. Trump is pushing Mexico to buy more from U.S. farmers, saying that if Mexico cooperates, tariffs could be avoided.

The Dow Jones Industrial Average allocates 18.71% of its weight to the technology sector, its second-largest sector exposure behind industrials. Five of the Dow’s 30 stocks are tech names and those five stocks were among the blue-chip index’s top seven percentage gainers today.

Microsoft (NASDAQ:MSFT) was the Dow’s top performer today as the stock jumped 2.8%, reclaiming its status in the $1 trillion market value club while ascending to an all-time high. Earlier this week, Bernstein analyst Mark Moerdler noted Microsoft’s cloud business could eventually generate $140 billion in revenue. The analyst has an “outperform rating on Microsoft stock.

Apple (NASDAQ:AAPL), the Dow’s largest tech holding, joined the party, adding 2.66%. Apple’s Friday rally appears to be a sympathy play as the stock traded higher alongside the broad market, not on the back of company-specific news. There was some bullish analyst chatter on Apple stock yesterday along with rumors that the company is considering an acquisition to bolster its footprint in the fast-growing autonomous vehicle market.

Outside of tech, United HealthGroup (NYSE:UNH), the largest healthcare stock in the Dow and one of the index’s worst-performing components this year, enjoyed a decent day Friday, gaining 2.05% to put a dent into a year-to-date loss of almost 3%. On Thursday, UnitedHealth declared a quarterly dividend of $1.08 per share, up from the previous quarter’s payout of 90 cents a share.

McDonald’s (NYSE:MCD) continued its assault on the record books, hitting another all-time high after Bank of America Merrill Lynch reiterated a “buy” rating on the fast food giant with a $220 price target, implying decent upside from Friday’s close around $206.

“The company has generated strong growth in international markets, and though its traffic has been down in the U.S., its same-store sales have easily outperformed competitors as customers pay higher prices and order more add-ons,” according to Restaurant Business.

Heading into Friday, it was expected that the May jobs report would miss expectations and do so in a big way. Still, it is encouraging to see riskier assets, such as stocks, handle that number with aplomb. There is still plenty of June, but the Dow closed the first week of a month that is historically rough on stocks on a four-day winning streak.

Traders likely bid stocks higher today because the weak jobs number stoked hope that if the economy slows, the Federal Reserve could step in with interest rate cuts. In fact, bond markets are now pricing in as many as three rate cuts this year, with one possibly coming as soon as next month.

It remains to be seen whether or not the Fed will pursue any rate cuts this year, so monitoring President Trump’s Twitter feed for trade updates may help investors get a sense for where stocks are headed next week.

As of this writing, Todd Shriber did not own any of the aforementioned securities.