Dow Jones Today: The Dow Has a Caterpillar Problem

It was a good day for stocks, for the most part. Particularly for investors focusing on the Nasdaq Composite and the S&P 500. 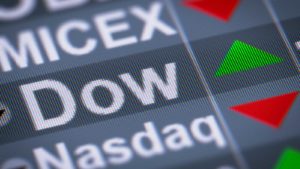 Those two index continued their recent ascents, adding 0.85% and 0.47%, respectively. It was a different ballgame for the Dow Jones Industrial Average, which slumped 0.29%.

The Dow’s Wednesday weakness was largely attributable to a 4.50% loss by industrial machinery maker Caterpillar (NYSE:CAT).  It was one that occurred on more than double the average daily volume. Simply put, Caterpillar’s second-quarter earnings report was a mess.

Caterpillar admitted its results were hampered by the U.S.-China trade tiff, and while overall demand appears decent, there is no getting around the fact this is a cyclical stock. One that is highly levered to global economic growth trends.

On that front, the International Monetary Fund (IMF) on Tuesday lowered its growth forecast for the fourth time in 10 months.

Caterpillar wasn’t the only industrial offender in the Dow today. In fact, three of the index’s four components from that sector traded lower Wednesday with 3M (NYSE:MMM) being the only one in the green.

Shares of Boeing (NYSE:BA), the Dow’s largest member, slid 3.15%, after the company said it slowed or temporarily suspend its 737 Max production. Issues related to the now-controversial passenger jet prompted Boeing to report a second-quarter loss of $3.7 billion, its worst quarterly loss ever.

As a result, Boeing’s commercial aviation unit had a $4.9 billion quarterly loss, too much for surging defense, space and security earnings to overcome.

“The company is expected to generate adjusted earnings per share of 89 cents for the second quarter, compared with $1.04 in the year-earlier quarter,” reports Barron’s. “Analysts also estimate sales of $15.7 billion for the quarter that ended in June.”

A couple of interesting side notes here in the midst of earnings seasons, and yes, we’ll talk about plenty more reports tomorrow. First, ongoing strength in the technology sector is encouraging even as the Justice Department continues probing the dominant market positions of some of the biggest technology companies.

Second, guess what’s coming up next week? Another Federal Reserve meeting. Currently, markets are pricing 100% odds that the Fed will lower rates next week. There are a lot of potential outcomes, though a half-point decrease appears to be a bit of stretch as that 100% figure implies, there is plenty of wiggle room for the Fed to disappoint.

Heads up Mexico, U.S., New Zealand: Do not underestimate how much people love pot